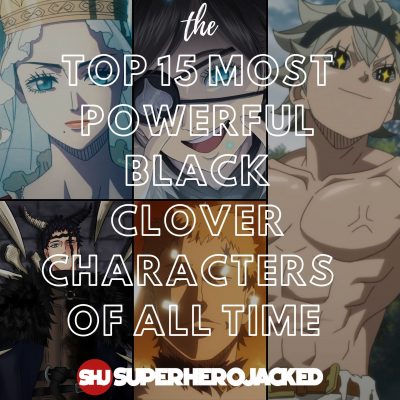 The Top 15 Most Powerful Black Clover Characters of All Time have a handful of the same members as we saw among our most popular Black Clover characters – but there are some super powerful characters that make the two lists very different.

But, let’s be honest, power is often popular!

Black Clover is one of the most popular anime around right now and has steadily grown a loyal following since its debut in 2017.

Mike even currently binged it and became obsessed with it recently as well.

It is a rags-to-riches story following the struggles of two orphan boys as they climb the ranks of the Noble Order of Magic Knights in the Clover Kingdom to become the next Magic Emperor. It’s an anime filled with magic, intrigue, and as you watch it makes you root for the kids as they face exponentially harder struggles the higher they climb up the ranks.

As mentioned above, we’ve already done a Top 10 Most Popular Black Clover Characters of All Time list, so the next step was to see who would place in the list of most powerful characters in the series. After careful research, we’ve come up with these characters and put the others who didn’t make the cut into the runner-up list.

If any characters you like didn’t make it on the list, you can still check to see if you can train like them by checking out our list of Black Clover Inspired Workout Routines using this link.

TOP 15 MOST POWERFUL BLACK CLOVER CHARACTERS OF ALL TIME

Starting our list of most powerful Black Clover characters of all time is 1/3 of the Spade Kingdom’s Dark Triad, Zenon Zogratis!

Zenon is a tall man who has a penchant for wearing black clothing. He has a cross-shaped mark on the left side of his face which goes all the way down across his eye. He is a merciless individual and serves as the host of the demon Beelzebub. He changes his appearance depending on how much demon energy he chooses to access. At 100%, his entire body is encased in black, he sprouts wings from his back and horns on his head, and his abdomen is covered in bone, protecting his torso.

He is a user of bone magic, being able to sprout bones from his body which he can use for both close quarter and long-range combat attacks. He also uses a rare kind of magic called spatial magic, which allows him to seal magic and negate the mana used.

Next up in our list of most powerful Black Clover characters of all time is Asta’s rival in becoming the next Magic Emperor, Yuno!

Yuno has the same never-give-up attitude as Asta, a result of growing up with him in the orphanage. He is a powerful Wind user who later becomes the Vice-Captain of the Royal Knights. He has the ability not only to sense mana or magical energy but can also absorb the magic around him to transform into a more powerful form.

Affiliation: Eye of the Midnight Sun

Patolli is an elf and a powerful Light Magic and Reincarnation Magic-user. He can use his magic to blind his opponents or move at great speeds. He is also able to use Reincarnation magic to resurrect dead souls into the bodies of the living.

In twelfth place in our list of most powerful Black Clover characters is the devil behind the decimation of the Elves, Zagred!

Zagred is a high-ranking devil and the mastermind behind the destruction of the elves, and their dark ressurection. He is able to use Kotodama magic, which uses magic to alter his surroundings to through speech. He is also able to summon monsters and use his magic to absorb other forms of magic and the lifeforce of other beings.

In eleventh place in our list of most powerful Black Clover characters is the Princess of the Heart Kingdom, Lolopechka!

Lolopechka is a Water Magic-user and can manipulate water to attack her opponents or to heal herself. She is also able to use her magic to summon the Spirit of Water, Undine to assist her in battle. As the Princess of the Heart Kingdom and the Priestess of Undine, she can access all the knowledge and skills of her predecessors.

Coming in at number ten among our list of the most powerful Black Clover characters is the Witch Queen, the mother of all witches!

The Witch Queen is a cruel woman who detests men and imperfection. She has used her magic to manipulate others for her benefit and can use her blood magic to create objects from blood and can sense magical energy around her. She can release her mana or magical energy and use several high-level spells without fatigue.

Next up, at number nine on our list of the most powerful Black Clover characters, is Fuegoleon Vermillion!

Fuegoleon is the first son of House Vermillion and is the captain of the Crimson Lion squad of the Magic Knights. Like many magic users, he can use his Fire Magic to create objects of fire and can concentrate a large amount of fire to restrain his opponents.

At number eight is the second member of the Spade Kingdom’s Dark Triad, Vanica Zogratis!

Like the Zenon, Vanica uses Blood Magic and can manipulate blood to form constructs. She has a particular affinity for creating claws and spikes made of blood, which she uses to impale her opponents. She is also able to create curses to either harm her enemies or restore her allies’ energy and powers.

At number seven on our list of the most powerful Black Clover Characters of all time is the leader of the Black Bull squad of the Magic Knights, Yami Sukehiro!

Yami is a well-built man who uses Dark Magic to manipulate darkness to absorb Light Magic or channel it to increase his physical prowess and fighting skills. He can also use darkness to incapacitate or restrain his opponents.

Mereoleona is a Fire Magic-user and like other magic users, can manipulate fire to form objects which she uses for offensive or defensive moves. She likes to use her fire magic to create a lion’s claw. She is a powerful hand-to-hand combatant and has enhanced strength, speed, and endurance. She is able to generate a protective shield around her using her mana, as when she bathes in hot lava.

Starting our top five most powerful Black Clover characters of all time is Julius Novachrono!

As the 28th Magic Emperor of the Magic Knights, Julius leads all the squads in the protection of the Clover Kingdom and its citizens. He is a powerful Time Magic user and can use this magic to heal wounds or trap his opponents in time loops.

Next up, coming in at number four in our list of most powerful Black Clover characters is the first Magic Emperor in the Clover Kingdom, Lumiere Silvamillion!

Lumiere Silvamillion uses Light Magic in order to form a light arrow which he flies along to travel great distances in a short time. He is also able to create swords of light and can even use his magic to combine with others, as when he combined his Light Magic with Licht’s Sword Magic. It is his awesome display of power against an angered Licht that earns him the title of Magic Emperor.

Affiliation: Leader of the Elves

Coming in within the top three in our list of the most powerful Black Clover characters is the leader of the Elves, Licht!!

Licht is a user of Sword Magic. He can generate swords from thin air and can use Union Magic to combine and reinforce his magic to create more powerful spells. He uses three swords namely the Demon Slayer sword, Demon Dweller sword, and the Demon Destroyer sword to fight his opponents and can use it to draw power from the Underworld, which enables him to counter Zagred’s demonic attacks.

Coming in at number two among the most powerful Black Clover characters is the third and final member of the Spade Kingdom’s Dark Triad, Dante Zogratis!

Dante is the ruler of the Spade Kingdom and together with his siblings Zenon and Vanica form the Dark Triad. He is a Body Magic-user and a Gravity user, which means he has control of his bodily tissues, which he can use to alter his physique and even regrow lost limbs. As a Gravity user, he can increase the gravity on a certain area and slam objects with great force, or use it to allow himself and others to levitate off the ground.

Coming in at number one among the most powerful Black Clover characters is Clover Kingdom’s future Magic Emperor, Asta!

Asta is the most powerful because he has the ability to use Anti-Magic, which is a unique kind of magic that nullifies the effects of other magic attacks. What makes it so powerful is that using it involves the combination of the strength of both Asta and Liebe, which vastly increases the power level of Asta as he channels Liebe’s power.

Additionally, Asta is already in peak condition and has enhanced strength, speed, durability, and reflexes thanks to his rigorous training even before he joined the Black Bulls squad of the Magic Knights. He’s strong enough to do 1,000 one-handed-hand stand pushups without breaking a sweat, and he can take on several attacks from Heath and still being able to stand.

A Dozen Different Workouts for Magic Knights of any of the nine Guilds ranging from The Black Bulls, & Golden Dawn all the way to The Crimson Lion & Purple Orcas!

YES! I want to Unleash My Inner Magic Knight! 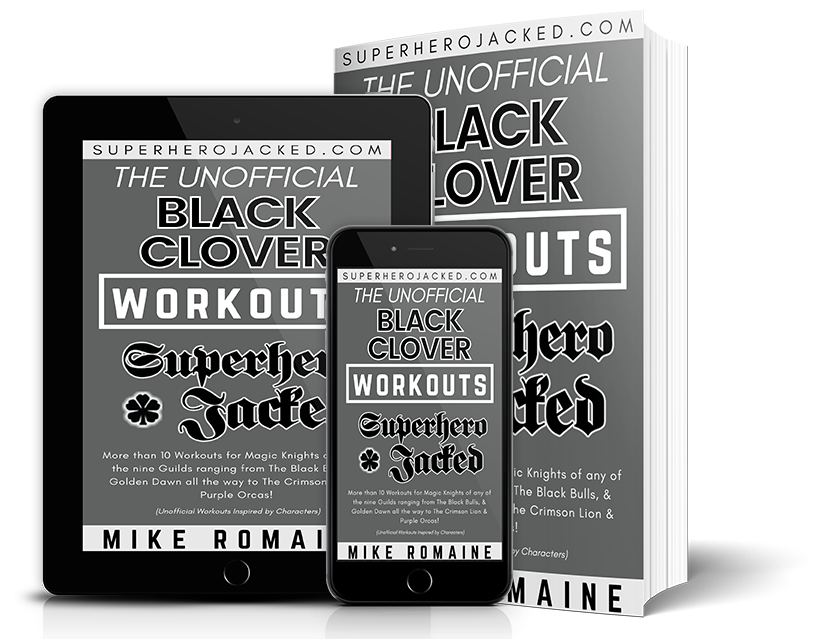