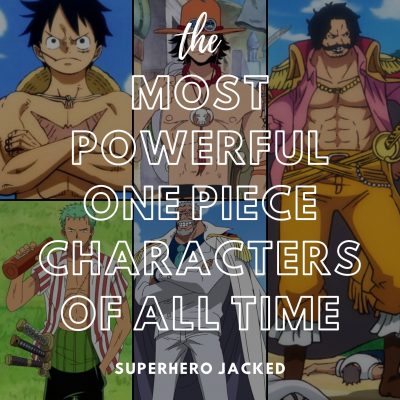 There are so many damn powerful One Piece Characters and so many opinions out there that it actually made it EXTREMELY difficult to place all my findings into one spot and mix it all together to get a good average.

Serious, a lot of lists already…

And this was easily the hardest one with only possibly Naruto coming close.

SO, that being said, I will definitely be reviewing comments for placement and I can always weight different opinions about the main list and the runner up section – but after scouring the internet and researching tons and tons of lists, asking The Academy and The SHJ Army for polling, and then putting it all together – this is what we have for The Most Powerful One Piece Characters of All Time!

I mean we literally had to make cuts to some of the characters being added to our list of The Most Powerful Anime Characters of All Time because I didn’t want to list too many One Piece characters.

If you want to check out more One Piece Inspired Workouts outside of the ones on this list we now also have our mini-workout-database within our larger Anime Workouts Database, as well as our new One Piece Workout Placement Quiz.

I already told you how I made this one, so let’s get right into it (you know, right into it, after I talked for 1,000 words, obviously)…

MOST POWERFUL ONE PIECE CHARACTERS

Starting off our list at number fifteen (yes, we have extra runner ups AND I extended the list to fifteen because there are so many strong characters) among the most powerful One Piece characters is chef of the Straw Hat Pirates: Sanji!

Throughout the course of One Piece Sanji just constantly grows in power and is one of the Straw Hat’s three main fighters behind Luffy and Zoro!

Coming in at number fourteen among the most powerful One Piece characters is one of the most hated villains ever to be introduced into One Piece: Donquixote Doflamingo!

And, when I say he’s one of the most hated, I guess you guys (The SHJ Army) don’t really count there because you requested his routine like crazy.

Doflamingo usually appears on most lists between ten to twenty when ranked in the most powerful characters – which averaged out to be just about here.

Next up on the list of the most powerful One Piece characters is Trafalgar Law.

It’s fitting that he comes in right after Doflamingo considering he worked for him for a long time and even trained under him as well.

On top of that training with Donquixote Law also ate the Ope Ope no Mi Devil Fruit – making him insanely powerful and known for stealing peoples hearts to take control over them.

Law is also one of the most popular and overall influential characters in the entire series and I’ve seen him rank as high as the top five on some lists of the most powerful One Piece Characters.

Where do you place him?

Affiliation: Seven Warlords of the Sea

Occupation: Warlord of the Sea / Pirate

Next up on the list of the most powerful One Piece characters is Dracule Mihawk!

Mihawk is currently the strongest swordsman in all of One Piece but Zoro is deadset confident on beating him one day.

He is a member of the Shichibukai and known as the “Greatest Swordsman in the World” – so Zoro will one day hope to strip him of that.

Most lists have Mihawk coming in around the top ten to fifteen slots unless you look up older lists where he was much more prominent and the bigger names towards the start of the series.

Just missing the top ten most powerful One Piece characters is Big Mom!

Big Mom’s placement on these lists has been pretty crazy and I’ve seen her place top five one some and then just completely not place within ten to twenty five characters on others, but overall she makes it in, just missing our top ten.

She also even just made it on our list of The Most Powerful Female Anime Characters of all time as well!

Moving into our top ten most powerful One Piece Characters of all time we’re starting with Akainu.

Akainu was actually pretty hard to place as well considering some lists rank him as number ONE while other lists have him far up in their top ten to twenty range.

I personally think he deserves a slot within the top ten, if not even further into the list closer to the top five, but this is where he got averaged out – which isn’t THAT far off where I would have placed him myself.

Skimming his way into the top ten most powerful One Piece characters of all time is the man that wanted to surpass the Strongest Swordsman in the World (Mihawk): Zoro!

I think some of Zoro’s placement comes from a bit of fan bias as he is definitely one of the most popular BUT it’s not that far off the truth.

I saw some lists place him right there with Sanji while others had him far, far above – so I’m curious to see if you think he should make it into the top ten!

Number eight on our list of the most powerful One Piece characters is Dragon’s right-hand man: Sabo!

I personally think Sabo’s growth potential is extremely high and he has the potential to be stronger than Dragon at some point – and some other lists agree, placing him in the top ten often (while other lists definitely don’t see it that way and barely have him ranked).

Coming in at number seven among the most powerful one piece characters is is father to Monkey D. Dragon and paternal grandfather of Luffy: Monkey D. Garp!

Monkey D. Garp is known as the “Hero of the Marines”. Not only is he one of the strongest One Piece characters EVER, but he also commands a tremendous among of power, making him deserving of his slot this close to the top five.

A character that could easily have placed in the top five if we were talking about pure strength along, comes in at number six among the most powerful One Piece characters: Kaido!

Kaido is known as the “Strongest Creature in the World” so if we’re talking about pure head to head matches then I’m definitely moving him up a bunch of slots and even placing him in the top three!

Breaking into the top five among the most powerful One Piece characters of all time is a character that made quite a few lists as the number ONE slot.

Gol D. Roger is famously known as the “Pirate King” and is the one who started the Golden Era of all Pirates!

It’s hard to place him based on other lists placement considering some are taking into account ALL characters both alive and dead and then placing him top three almost every single time for what he was as a legendary pirate captain of the Roger Pirates – where-as others are only taking into account where the series is currently (as they make their list) or where it will end up.

For that reason I decided to give Roger the number five slot!

Easily deserving his slot at number four among the most powerful One Piece characters of all time is none other than Shanks!

Shanks is a member of the Yonko like Big Mom, Kaido and a couple more characters we’ll see both in the top three and the honorable mentions – and he’s also the leader of the Red Hair Pirates!

Shanks is Luffy’s mentor, so he’s also one of the most popular characters in the show – but I personally don’t think that had anything to do with him making the top five in almost every list.

Coming in at number three among the most powerful characters of all time is Blackbeard!

Blackbeard is also a member of the Yonko and ranks in among the top three, often taking the number one slot, on a good handful of lists.

Blackbeard is the only character in the entire series that we’ve seen with the power of TWO Devil Fruits; one allowing him to have the power of darkness which literally helps him to make blackhole-like manifests to help him in battle!

Next up on the list, coming in at number two, is Monkey D. Dragon.

Dragon is the Revolutionary Army’s leader, coming in one rank above Sabo, and also known as the “World’s Worst Criminal”.

One list states that “His strength is phenomenal and it is likely comparable to the Yonko themselves.” For this reason he comes in at number one on a lot of lists all over the internet, both personal fan lists and overall big top ten to twenty fives lists – so number two is a slot I think he’s deserving of.

Coming in at number one among the most powerful One Piece characters of all time is Monkey D. Luffy!

There is a method to the madness right now. Luffy places anywhere from number one to fifteen among the lists all over the internet depending on how they go about ranking their characters – so I decided for the sake of where the series is going to give him his rightful spot among the top of the thrown and crown him The Pirate King a bit early.

The Most Powerful One Piece Characters of All Time (Runner Ups):