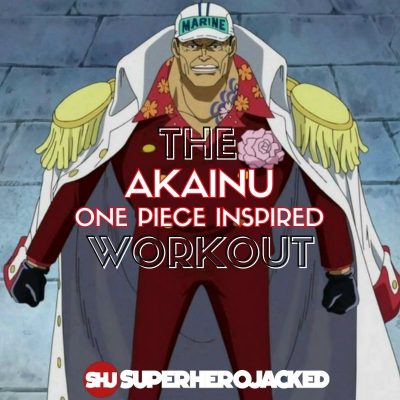 It’s time to bring another one of the most powerful One Piece characters into SHJ databases.

We’ve seen countless One Piece Inspired Workouts, so it’s only right that Sazakuzi, or as many of you may know him as Akainu, gets his place among them.

One Piece characters are fun to create routines around because there are so many of them that are just outrageously gigantic, which allows me to bring one of them in anytime we’re in need of another routine revolving around building mass and strength.

Which is what we’re going to be doing with this one, if you couldn’t guess it.

Being as mighty as he is though, it didn’t quite get him on our list of the most popular One Piece characters of all time, which is why he is just now making it onto our growing list.

Nevertheless, I’m sure people are going to get a kick out of receiving him as an answer on our One Piece Workout Placement Quiz.

Akainu is huge. He is definitely one of our characters that I would define as a behemoth within our Anime Workouts Database.

His weight was not listed, but we can only assume that he has hundreds and hundreds of pounds of muscle on his gigantic frame. 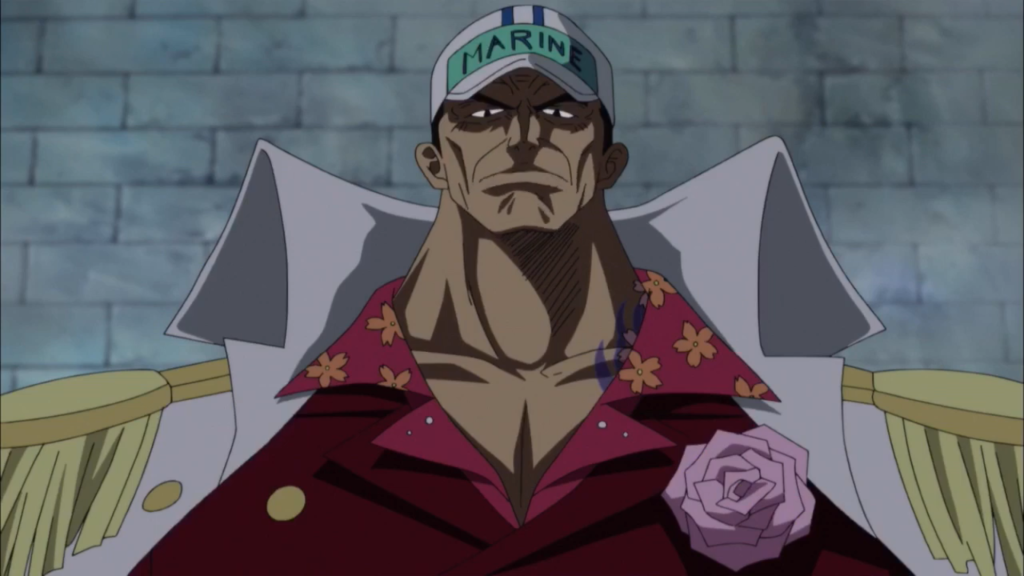 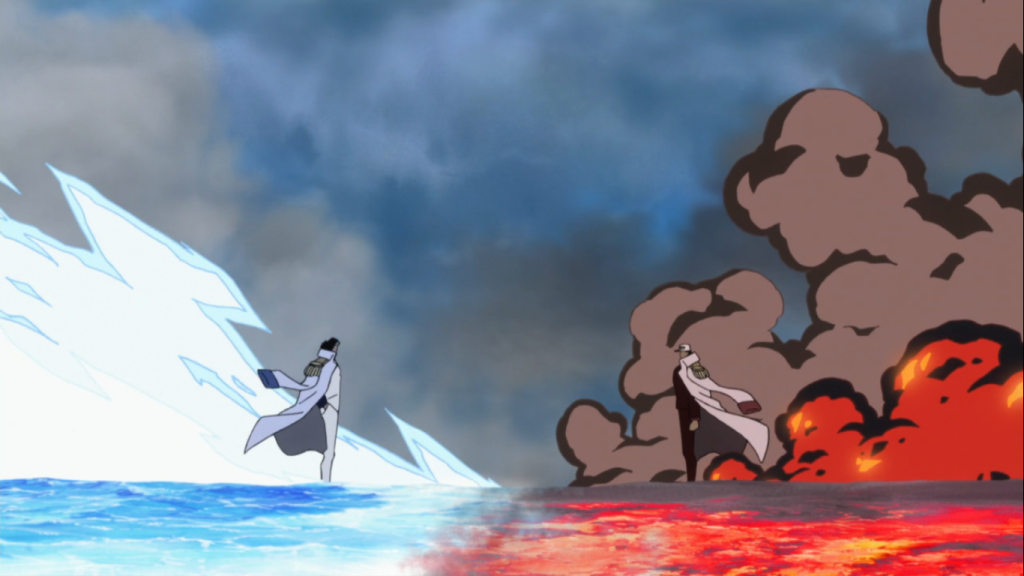 To learn enough about Akainu that it helps us build out our workout we’ll be pulling right from his Wiki Fandom page.

The One Piece Wiki Fandom starts us off with a long introduction, stating this about Akainu:

Sakazuki, formerly known by his admiral alias Akainu, is the current fleet admiral of the Marines, succeeding the previous fleet admiral, Sengoku. During the first half of the series, he was one of the three admirals, as the last one to debut. Upon becoming the fleet admiral, one of Sakazuki’s first decisions was to relocate Marine Headquarters into the New World in preparation for the New Pirate Age.

In the manga, Akainu was first mentioned by Nico Robin during the initial encounter with Aokiji. In the anime, he was mentioned earlier by vice admiral Jonathan during the anime-only G-8 Arc, which aired after Akainu had been revealed in the manga.

Sakazuki is perhaps the most strident follower of Absolute Justice in the entire series, to the point where his extremism prompted his fellow admiral Aokiji to oppose his promotion to fleet admiral and resign from the Marines after this effort failed. Because of his actions, Sakazuki is one of the main antagonists of the Marineford Arc and, after his promotion, he became one of the central antagonists of the series.

Moving into Akainu’s powers and abilities section they lead with a long section about his overall powers, breaking down the power he wields over the Marines – but we’ll specifically be talking about his physical abilities, which they begin telling us about here:

Combat-wise, Sakazuki as an admiral (now fleet admiral) is among the world’s strongest figures, having been thought with his fellow admirals to constitute the World Government’s “Greatest Military Force” (i.e., the strongest single combatants that it can offer, feared by criminals the world over).

But, that’s not even close to all they tell us about his physical abilities and strength.

They also go onto break it down into much more depth here:

Befitting an admiral, Sakazuki’s physical prowess is immense. His raw strength was enough for him to go up against and clash evenly with Whitebeard in close quarters—the “Strongest Man in the World” who, in his old age, could still overpower a giant’s strength easily. Sakazuki even held back a two-handed swing of the elder’s large naginata (which came clad in a quake bubble to massively enhance its striking force) using a single leg.

Perhaps most impressive, however, are Sakazuki’s vast durability and endurance, best illustrated by how not even two successive quake punches from Whitebeard hitting him point-blank (one his neck and another his midsection, and both coming imbued with Haki, further increasing damage) could keep him down, the second blow strong enough to split the island of Marineford in two as an after-effect (in retrospect, a relatively weaker version of the same quake attack had sufficed to incapacitate a vice admiral giant); Sakazuki retained not only consciousness thereafter but had more than enough strength left to keep on fighting without at any point evincing the slightest exhaustion or impediment by injury (with only some bleeding visible on his face). Another testament to his stamina, endurance, and willpower is Sakazuki’s face-off against Kuzan, wherein he equaled the other admiral for ten days total, in the process of which both men suffered heavy injuries; despite the sheer amount of time the duel took to settle, Sakazuki emerged the decisive winner over Kuzan.

Mobility-wise, the admiral has shown himself quite fast, propelling himself forward at great speeds. He can easily gain ground on others that are noticeably fast and in flight from him, as seen with Jinbe whom the admiral caught up with swiftly despite the former’s head start resulting from the powerful people trying to keep Sakazuki at bay.

Otherwise, the admiral has shown acute enough hearing to be able to perceive underwater movements from afar.

And, before we break down what this means we’ll be working around (although you likely know), it is relevant to discuss his Devil Fruit ability, which is part of what makes him one of the most powerful One Piece characters of all time:

Sakazuki ate the Magu Magu no Mi, a Logia-type Devil Fruit that allows him to create, control, and transform his body into magma. His magma is extremely hot and highly explosive, thus making it well-suited for combat, allowing Sakazuki to burn, melt, and destroy anything in his path—in fact, among all Devil Fruits, Sakazuki’s is said to offer the greatest attack power.

Sakazuki’s primary method of combat is transforming his arms into magma to launch burning punches (or clawed thrusts) that can easily penetrate human bodies,drastically enlarge his arms to throw forward giant magma fists meant to reach enemies farther away, and even launch multiple magma fists as a barrage of meteor-like projectiles, devastating the battlefield. Otherwise, he has been seen shaping his magma fist into a fanged dog head; a nod to his animal alias.

Beside the invulnerability of Sakazuki’s magma body against all but Haki attacks, its heat has enemies heavily discouraged from coming near and striking him physically, lest they be burned. Also, his powers bestow him high maneuverability; he can melt himself through anything in his path, even tunneling through the very ground, and can briefly fly using jet bursts of magma to propel himself.

No, I will not be teaching you how to turn yourself into magma.

BUT, what we will be specifically focusing on is:

So if that’s not one of your goals you can switch it up by checking out one of the other 1,000+ workouts in our Workout Database – but if you’re ready to lift heavy to get strong and massive, then you’ve come to the right place.

For this one we’re prioritizing mass, strength and endurance so we’ll be training around 5×5 compounds and then heavy weightlifting. At the end of each session you’ll have some varied cardio to also work in your endurance while shredding off some extra calories and unnecessary fat. I also tacked on a Massive Marine Circuit Test which you can hit each week, or come back biweekly to retest and see how you improve.

**Feel free to do 10-30 minutes of one option and switch it up on other days OR do 10-15 minutes of multiple options listed on one given day.**