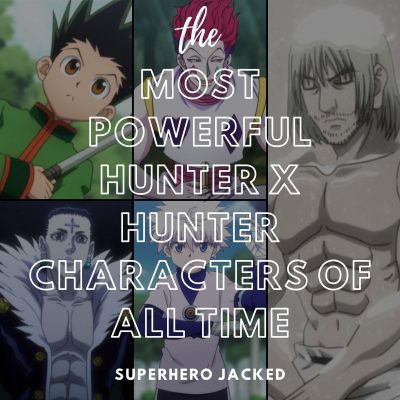 The Most Powerful Hunter X Hunter Characters of All Time are made up of a lot of The Royal Guard and The Zoldyck Family, BUT there are still some awesome characters here.

We already saw The Most Popular Hunter X Hunter Characters of All Time, so I’ll also be talking about the comparison in placement.

Actually, Hunter X Hunter is becoming more and more popular here at SHJ, and I’m not sure if that’s because more seasons are on HBO Max now that they have their partnership with Crunchyroll or if more more of The SHJ Army are picking it up right on Netflix.

I think for me it definitely falls in my top five anime of all time.

Although the new anime like Jujutsu Kaisen and Demon Slayer definitely don’t make it easy (and obviously a lot more to come)!

These little databases and quizzes help The SHJ Army members find more workouts from their favorites shows within The Anime Workouts Database while also giving you the best placement through the quizzes.

Oh, and of course we’ve also done a handful of “Most Powerful” and “Most Popular” for other anime so if you’d like to check those out you can visit our other listicles here.

Here are some places I utilized while researching placement:

Hero or Villain: Neither -> Assassin

Starting off our list of The Most Powerful Hunter X Hunter Characters of All Time we have Killua’s grandfather Zeno Zoldyck.

Zeno was likely the leader of The Zoldyck Family of assassins at one point, but comes in at number ten as we know him into his older age, but still one of the strongest characters in the entire series.

While he comes in at number ten and we still have more Zoldycks on the list: it’s important to remember that even Isaac Netero’s power grew weaker as he grew older – so we can only imagine how strong Zeno was in his prime.

Hisoka is a big part of our series from start to finish, with a bit of an intermission during some arcs, like The Chimera Ant Arc, but his power in undeniable.

We meet him as a character that is just so far ahead of the rest of the characters we know when he comes out of no where in The Hunter Exam Arc and then we just continue learning more and more about how strong he is!

Coming in at number eight among the most powerful Hunter X Hunter characters of all time is the father of our most popular character (Killua), and leader of The Zoldyck Family of assassins: Silva Zoldyck!

Silva is insanely powerful. Not only is he a world renowned assassin and head of the infamous Zoldyck Family, but he is also an incredibly strong Nen user, and has been training in the art of assassination since he was extremely young.

His Wiki Fandom even tells us: “He also defeated and killed an unknown member of the Phantom Troupe three years prior to the start of the main story, and dueled against Chrollo to an unknown result (both of them survived, though, and in the anime, Silva was shown coming back with no visible injury).”

Number seven on the list of the most powerful Hunter X Hunter Characters is Chrollo Lucilfer, the leader of the Phantom Troupes, and the last character we’ll see before we dive into a flurry of Royal Guard.

Not only is Chrollo extremely powerful, but he was also listed as our sixth most popular character among our Hunter X Hunter characters. I’m personally a fan of his, but I was surprised to see him come in that high on the top ten!

Although Chrollo’s overall physical strengths come in at number seven among the Phantom Troupes, he’s revered as the most powerful by most in the group.  His Wiki Fandom tells us about his duel with both Silva Zoldyck AND Zeno Zoldyck at the same time: “He was able to fight against Silva and Zeno Zoldyck, both extremely proficient assassins, simultaneously, without leaving any openings for the former to exploit,”.

Next up we start our Royal Guard characters, leading the list and coming in at number six among the most powerful Hunter x Hunter characters of all time: Shaiapouf.

Now just because he comes in at number six does not mean you should underestimate his power…Pouf is EXTREMELY strong.

His Wiki Fandom even talks about how strong he is in comparison to Isaac Netero who we’ll see later on in this list (spoiler alert): “As a Royal Guard, Shaiapouf is one of the four most powerful Chimera Ants in Meruem’s colony. Colt believed him to be capable of defeating Chairman Netero, considered the world’s strongest Hunter in his prime and by some the most powerful Hunter even in his old age.”

He can also fly, being the butterfly he is, which is awesome within itself…right?

Starting our top five most powerful Hunter X Hunter characters of all time is our next Royal Guard member: Menthuthuyoupi!

His Wiki Fandom page also talks about how Colt believed him capable of being Isaac, but that’s not what we’ll focus on when we break down some of his power level.

Instead I want to share the fact that he was able to take on Knuckle and Meleoron at the same time: “He was able to fight Shoot, whom he put in critical condition in less than 20 seconds of combat, Knuckle and Meleoron at the same time, with them having prepared tactics in advance and also receiving help from Morel and Killua, and had the chance to kill the former four while suffering next to no damage from their attacks, although they came close to forcing him into a state of Zetsu through Hakoware.“

Neferpitou comes in at number four among the most powerful Hunter X Hunter characters of all time and finishes off our Royal Guard members.

Pitou also came in at number nine among our most popular characters – and she is the strongest of The Chimera Ants on this list – outside of Meruem, The King!

Here’s how her Wiki Fandom describes her insanely strong power level: “Neferpitou is one of the most powerful Chimera Ants to live, and one of the strongest characters in the series. They fought and killed Kite, a powerful Pro Hunter, while suffering only minor injuries, and shortly after discovering Nen. Illumi referred to Neferpitou as Meruem’s “top soldier”. Despite intending to kill them, the King was only able to bruise Neferpitou with one of his tail strikes, which caused him to praise the Royal Guard.”

Although we talked about how the members of The Royal Guard were said to be able to beat Isaac Netero, he comes in at number three on the list among the most powerful Hunter X Hunter characters of all time for multiple reasons.

The first reason is that although we don’t necessarily know just how strong Zeno Zoldyck was in the past, we do have a clear indication of how strong Netero was because there were multiple moments throughout the show when Netero refers to his power level and how it has deteriorated substantially over time.

At one point, when Colt tells him that he won’t even pass the Royal Guard and Meruem is lightyears ahead in strength, Netero is actually overjoyed by the fact that he’s finally found someone that can compete with his power level – even in his old age.

Coming in at number two on the list of the most powerful Hunter X Hunter characters of all time is Gon, in his adult form.

After Kite is killed by the Chimera Ants, specifically Pitou, Gon makes a Nen Contract to increase his strength. By sacrificing his lifeforce and natural talents, his body forcible aged to a state where he could beat Neferpitou. And…in his adult form, he becomes just as powerful as Meruem, making Neferpitou powerless and Gon able to crush her head in just two blows.

An argument can be made for the placement of these top three, but Gon’s power level at this point is undeniable. He could even make it to the first slot – but Isaac Netero’s previous strength also has potential for the very top of the list among these other two insanely strong characters.

Coming in as the number one most powerful Hunter X Hunter character of all time is Meruem, The King of The Chimera Ants.

Meruem came in at number five among the most powerful Hunter X Hunter characters, but I personally do not like him at all…and was really surprised to see him even surpass Pitou on the list!

To give you an idea of just how strong Meruem is, here’s how his Wiki Fandom breaks it down for us: “Despite being a newborn, Meruem is the most powerful character to be introduced in the series thus far, as well as the one with the highest learning ability. Born as the ultimate biological weapon, his tremendous physical prowess is only matched by an unparalleled intellect, both of which seem to place him well above the realm of human possibility. As the King of the Chimera Ants, his power exceeds even that of the Royal Guards, and he can increase it even further by consuming Nen users. He fought Isaac Netero, formerly considered the strongest Nen user in the world, who retained a fearsome level of power even in his old age, while trying not to kill him, a condition Meruem likened to playing chess without a rook and bishop, and won their physical confrontation.”

I’m curious: do you place these last three characters in this order?

The Most Powerful Hunter X Hunter Characters of All Time (Runner Ups):