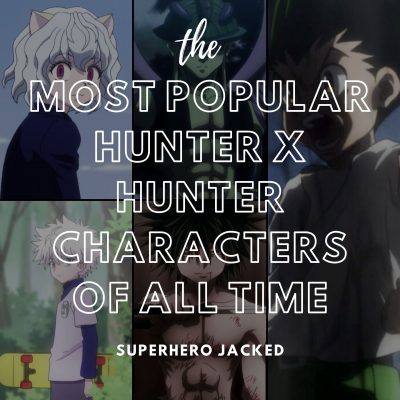 We finally hit enough Hunter x Hunter Inspired Workouts to be able to do some fun things with them here at SHJ.

First on the list is going through The Most Popular Hunter x Hunter Characters of All Time!

We also were able to build out our Hunter x Hunter Inspired Workout Database (which I also linked to above) that enables us to have a section specific to HXH within our larger Anime Workouts Database.

Clearly you guys seem to like the most powerful listicles, so we’ll keep them coming.

It also helps because I love hosting all the most powerful characters with inspired workout routines as well – so it makes it easy to build out your favorite lists.

But I also really like being able to do lists with the most popular as well – which are also just as easy (if not easier) for obvious reasons – and you guys also tend to requests these characters that fit these lists the most as well.

Here are a few more listicles seen recently that I think you guys will also like:

The only other thing I want to mention before we get into this one is the fact that we’re specifically going to be basing this one on MyAnimeList so we have a very clear and concise breakdown of the top ten most popular Hunter x Hunter characters.

In the past we’ve taken a few compilation of listicles, asked The SHJ Army and Academy members and then pulled all the stats together – but this one seems even more precise considering they have the whole audience taking votes already anyway.

So here we go: The Most Popular Hunter x Hunter Characters of All Time!

Starting us off with our journey into The Most Popular Hunter x Hunter Characters of All Time is Feitan Portor!

Feitan is a member of The Phantom Troupe – and actually, as the number two member, he was even the de facto leader for a time while they awaited Chrollo Lucilfer’s return.

Feitan makes a big impact on the show as not only one of the smaller assassin-like members, but also as a master torturers as well!

Next up on our list of the most popular Hunter x Hunter characters of all time is Neferpitou!

Neferpitou is actually the only female character that shows up on our list – although I did add Biscuit Krueger to the runner ups because I find it hard to believe she doesn’t make the top ten!

Neferpitou is also one of the strongest characters in the show as one of The Royal Guard under Meruem who also appears on this list as well (spoiler alert).

Coming in at number eight (although I personally thought he would be much higher) among our most popular Hunter x Hunter characters of all time is Isaac Netero!

Netero is the chairman of The Hunter Association for the majority of the time we meet him, and he’s also one of the strongest characters we meet as well.

He even made it onto our list of The Most Powerful Anime Characters of All Time!

At number seven and not quite making the top five most popular Hunter x Hunter characters of all time is Leorio!

If I had to had randomly guessed at the top five I would have put our four main members (Gon, Killua, Kurapika and Leorio) up there with our number two slot (who I won’t tell you just yet, unless you guess him on your own) – but Leorio actually comes in a bit behind expectations for me.

Up next among our top most popular Hunter x Hunter characters of all time actually kickstarts a nice winding road of both heroes and villains finishing off the last six on our list.

Leading that charge at number six is none other than Chrollo Lucilfer!

I mentioned Lucilfer before when we discussed Feitan Portor, so you guys already know he’s the leader of The Phantom Troupe – but he’s also seen as the most powerful member of the group although his strength level is actually ranked seventh in the group.

Coming in and starting our top five most popular Hunter x Hunter characters of all time is Meruem!

Meruem is The King of Chimera Ants and quite possibly the strongest character in the entire series (likely, actually).

He is also a character that we meet fairly late into the series (relatively speaking, in comparison to other characters on this list outside of Neferpitou), but still makes a big enough impact to come it at number five!  I can’t tell you how many requests we had come in for our Meruem inspired routine…to the point where it was so overwhelming I had no other choice to cut the line and add him to the top of the queue!

Coming in at number four among the most popular Hunter x Hunter characters of all time is a character that starts off the more typical top four on this list: Kurapika!

When we move out of the first two seasons and begin seeing some of Kurapika’s true power when he’s ready to get revenge for his family, the impact that he has is actually overwhelming to what we had been used to seeing.

Obviously we had seen that he is extremely motivated, strong and hard working – but his curve of vengeance driven killing takes him to a whole new level.

At number three among the most popular Hunter x Hunter characters of all time is actually our main character Gon Freecss!

On my personal list of favorites Gon comes in at number one and then this list just moves up (or down) a bit with Isaac being placed closer to the top five as well – but the fans were pretty adamant about their top two in the overall scores we pulled from to make this one.

I’m still taking Gon and his fishing pole and Killua and his yo-yo top two every day!

At number two among our most popular Hunter x Hunter characters of all time is Hisoka!

Hisoka definitely made my top three – as a character we meet fairly early on and who is constantly there as a trickster-Loki-type-character – he comes in and out of a web of “on our side but not quite” while having his overall search of being the most powerful, that just makes him a hard character to not love.

Number one among the most popular Hunter x Hunter characters of all time is Killua!

I mean, c’mon: you knew it was either going to be Gon or Killua coming into this one – but I’m curious whether or not you could have guess the top three!

Gon and Killua’s friendship and overall bond obviously carries us through the show along with our other favorite characters, but Killua’s background story and family tree has a big impact on why we all love him while we search for more information about Gon’s mysterious past.