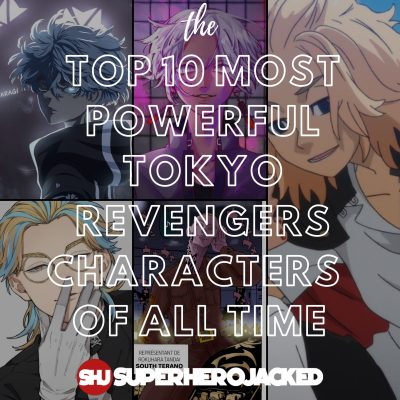 Tokyo Revengers is a time-jump anime, where the characters flit to and from the past in order to achieve a different outcome in their respective futures. It’s interesting to see how each character’s personality changes as they see the results of their actions in their past affect their future lives. If you think about it, it’s kind of like each of our fitness journeys. We may not see the results of our training today, but we’ll see it in the future when we’ve got cut abs and more energy and stamina when doing our workouts.

This list was easier to make as we have already made the Top 10 Most Popular Tokyo Revengers characters earlier. However, this is slightly different as we’re looking not at the popularity of each character but their overall strength and physical abilities.

We have our Tokyo Revengers Inspired Workouts in a mini-database within our larger Anime Workouts Database like we’ve now been able to do for a handful of the most popular shows to help SHJ Army members find the best workout for them, so if you’d like to check that out, you can click on the link. As more character workouts from the series get uploaded, you’ll be able to see them all on the list.

Of course, we’ve also done a handful of “Most Powerful” and “Most Popular” for other anime so if you’d like to check those out you can visit our other listicles in the links above.

For this one, I searched for powerful lists on CBR, Ranker, TopTens, Otakunet, and My Anime List to see how we would place them in our list of most powerful characters.

TOP 10 MOST POWERFUL TOKYO REVENGERS CHARACTERS OF ALL TIME

Starting off our list of The Most Powerful Tokyo Revengers Characters of All Time we have the Second Division Captain of the Tokyo Manji gang, Takashi Mitsuya!

Takeshi is a levelheaded guy who provides happiness to his gang. But despite his good nature, he is still a formidable fighter. He is well-known among other gangs as a powerful fighter and was even able to go toe-to-toe against Taiju Shiba for a while.

Aside from fighting for the gang, he is also the president of the Home Economics club and even sewed a uniform for Takemichi. He used sewing to make dolls and toys for his younger sisters that he otherwise couldn’t provide.

Coming in at number nine on the list of the most powerful Tokyo Revengers characters is the captain of the Tokyo Manji’s First Division, Keisuke Baji!

Keisuke is a man with a wild personality similar to Mikey’s. He enjoys the thrill of battle and is most comfortable in the thick of a raging battle between two opponents. He is loyal to the gang and even goes so far as to be cast as the villain in order to achieve the gang’s true aims.

His fighting skills are no joke either. He was able to fight and defeat 50 enemies alone while suffering from a serious neck injury with nothing but a crowbar as his weapon. He only collapsed after the fight due to severe blood loss.

At number eight among the most powerful Tokyo Revengers characters of all time is the main antagonist of the series: Taiju Shiba!

Taiju is the 10th leader of the Black Dragon gang and a powerful combatant. He is strong enough to be able to lift a church pew with one hand, and his endurance is so high that he was able to withstand Mikey’s signature High Right Roundhouse Kick and still get up and fight. His punch is so strong that his opponents get thrown back several feet.

Next up among our most powerful Tokyo Revengers characters of all time is the younger Haitani brother, Rindo Haitani!

Rindo is a member of the S62 Generation, a group of six teenagers who were known to violent crimes in the past. He is a sadistic person, smiling an evil grin while he is fighting and relishing the screams of his opponents when he breaks their limbs. He is a proficient wrestler and is able to defeat opponents larger than him because of his training.

Just missing the top five and coming in at number six among the most powerful Tokyo Revengers characters of all time is Ran Haitani, the older Haitani brother.

Ken is a brawler, and prefers to fight using powerful kicks and punches. He has incredible stamina and endurance, being able to recover quickly and enter the fray again even after taking a knife to the neck. He was able to defeat 20 opponents and still remain standing despite the immense effort. His kick has been shown to be strong enough to knock back his opponents several feet, and he was even able to the larger South Terano.

At number four among the most powerful Tokyo Revengers characters of all time, we move the leader of the Tenjiku, Izana Kurokawa!

Izana is the President of the Tenjiku gang and is its strongest member by far. As President, he is able to utilize the entire gang to do his bidding and to weaken his opponents by sending the grunts in before he joins the fray. He has a skill called “Undefeatable Sense” which allows him to predict the moves of his opponents easily and therefore counter them with his own more devastating attack.

Coming in and making the top three among the most powerful Tokyo Revengers characters is the leader of the Rokuhara Tandai, South Terano!

South is one of the “3 Deities”, the three most influential gang leaders since the disbandment of the Tokyo Manji gang. As the gang’s leader, South can command one of the most powerful gangs. He has incredible physical strength and precision and can throw a person while riding one-handed on a motorbike. Like Taiju Shiba, he is a brawler and relies more on brute strength than technique or skill.

Coming in at number two among the most powerful Tokyo Revengers characters of all time is the leader of the Brahman Gang, Senju Kawaragi!

Senju is the only female gang leader on this list, which is an impressive feat considering the brawler nature of the other characters. While diminutive in size, she makes up for her height in the form of her martial arts and acrobatics skills. She is able to perform feats such as a Flipping Axe Kick which she uses when she fights larger and bulkier opponents.

Coming in at number one among the most powerful Tokyo Revengers characters of all time is the leader of the Tokyo Manji Gang, Manjiro Sano!

Manjiro or Mikey is usually a carefree individual, but he is also the leader of the Tokyo Manji gang. As their leader, he has an imposing and commanding presence, and many other gangs have a certain fear and respect for him. This is due to his fighting prowess and leadership quality.

He is known as the Invincible Mikey as he has been known to defeat several opponents with a single kick and has the ability to increase other members’ strength in battle with his presence by increasing morale.

The Most Powerful Tokyo Revengers Characters of All Time (Runner Ups):