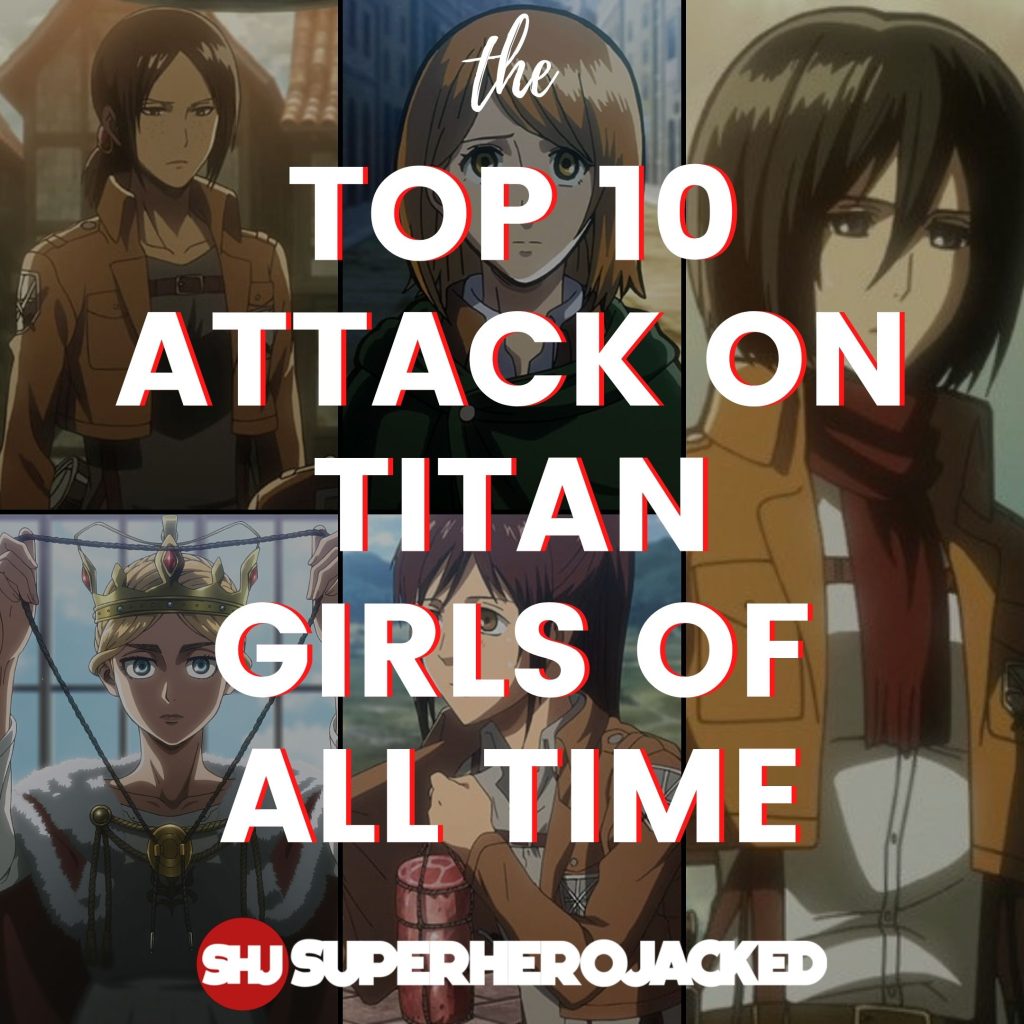 For this one we're going to be breaking down the top ten Attack On Titan Girls of All Time!

We have been through a handful of lists for our favorite Attack On Titan characters and we even have our Attack On Titan Inspired Workout Database, but now it's time to go through some of the top females across the entire anime.

Attack On Titan girls are a HUGE part of AOT, which is one of the reasons I love to watch as we have amazing characters from Mikasa all the way to our girl Titans!

Most Popular Attack On Titan Characters of All Time

Most Powerful Attack On Titan Characters of All Time

The first on our list among our Attack On Titan girls is Isabel Magnolia!

Isabel Magnolia was one of Levi's friends before (and after) they both joined the Scout Regiment, the other being Furlan Church.

In Isabel's Wiki Fandom abilities description they tell us: "Isabel, along with Levi and Furlan, stole omni-directional mobility gear while living in the Underground City. They trained themselves and in time became proficient with it. They were so good that they could evade the Military Police easily, and they looked at it almost like a game."

Next up on our list among our Attack On Titan girls is Carla Jaeger!

Karla was Eren's mother, and is actually one of the fan-favorite women on the show, as we get to see some of her background history and personality.

Here's some fun information about Carla from her Wiki Fandom page about her background: "During her youth, Carla worked as a waitress in a bar that Keith Sadies frequented. One day, Keith brought along Grisha Jaeger, who had recently been found lost outside the Walls. Carla reprimanded Keith, thinking that he wanted to beguile Grisha into joining the Scout Regiment, but both men denied this."

Coming in at number eight on our list among our Attack On Titan girls is Pieck Finger!

Pieck Finger is an Eldian who had served as one of Marley's Warriors and possessed the power of the Cart Titan.

Her Wiki Fandom discusses her intelligence level as one of her main abilities in her abilities section before going into her titan powers. They lead off her titan abilties with a brief overview, stating: "Pieck has the power to transform herself into a 4m Titan known as the Cart Titan. It is the shortest of the human-controlled Titans."

Curious what other 1000+ Free Workouts we have?

Check out the full Anime Workout Database and find your new workout!

At number seven on our list among our Attack On Titan girls is Gabi Braun!

Gabi Braun is the second Eldian on our list, coming in after Pieck Finger, who lived in the Liberio internment zone and the cousin of Reiner Braun (who is another fan-favorite, and actual made our list of the most powerful AOT characters at number nine).

Gabi is a Warrior candidate that is likely to inherit the Armored Titan power.

Gabi is actually a great candidate for a routine here at SHJ, here Wiki Fandom stating this about her abilities: "As a member of the Marleyan army and a candidate to inherit the Armored Titan power, Gabi has gone through a thorough military training. She is a very resourceful individual, creating a make-shift bomb in the midst of the battle of Fort Slava. She also had the idea of simulating her surrender in order to launch the bomb from a more favorable position. She is noted by many to be the most favorable candidate to inherit the Armored Titan, though Udo implied that his grades were better than Gabi's. It can be assumed that her hand to hand combat prowess are considerably superior to those of Falco, since he lamented his poor performance as a candidate while having several noticeable injuries on his face after one of their sparring sessions."

Join The Superhero Academy and start unleashing your inner hero.

Next up on our list, just missing out on the top five among our Attack On Titan girls is Petra Ral!

Petra is the third Eldian on our list (clearly we're on an Eldian roll here), who served as a hand-picked soldier of the Survey Corps by Levi Ackerman placed in the Special Operations Squad.

Like Gabi, she's also a great character for our training style here at SHJ, her Wiki Fandom writing this about her training and vertical maneuvering equipment: "She was a skilled and experienced soldier using the vertical maneuvering equipment and had a high kill record of Titan kills (58 Titans killed, 48 in team and 10 in solo), being one of the highest known in the series so far.[3] For that reason, she was handpicked by Levi to be part of the Special Operations Squad. Her coordination with Oluo and Eld was incredible, allowing them to come close to defeating the Female Titan by themselves."

Starting our top five Attack On Titan girls is Ymir!

Ymir was a graduate of the 104th Training Corps and a former member of the Survey Corps.

She also had the ability to transform into the Jaw Titan, and had knowledge about the true nature of Titans and the history of the world outside the Walls.

Ymir is not only one of the top girls on Attack On Titan, but she's also one of the most powerful characters AND influential characters.

Moving in through our top five Attack On Titan girls we have workouts inspired by each and every character the rest of the way, starting with Historia Reiss at number four.

Historia is the current Queen of the Walls. She is also the illegitimate child of the nobleman Rod Reiss and is the last remaining member of the Reiss royal family.

Historia was also very fun to build a workout routine around, and a character that was requested a TON seeing as how she is such a fan-favorite and well liked among the AOT fans in our SHJ Army, so well before going into this list I was pretty sure she was easily making the top five.

Coming in among the top three Attack On Titan girls is Annie Leonhart.

She  is a graduate of the 104th Training Corps and former member of the Military Police Brigade. Her exceptional skills with swords and unarmed combat earned her the 4th rank, but she is also noted to be a lone wolf who struggles to work with others.

So even without factoring in her Titan form abilities she was a great character to build a workout around.

Coming in at number two among our top Attack On Titan girls (because I think you know who she was never go to top) is Sasha Blouse!

Sasha was a member of the Survey Corps and also ranked ninth best among the 104th Training Corps.

Our workout routine inspired by Sasha is an extremely popular one among our SHJ Army members. This is how her Wiki Fandom breaks down her abilities: "Raised as an animal hunter, Sasha showed high level skills in archery, horseback riding, and tracking. Sasha was ranked one of the top 10 trainees in her squad, implying good physical abilities. She was also commented to have a better sense of balance than some of the other trainees. Sasha's hearing was also very acute, to the point that she could detect an approaching group of Titans before many of her fellow trainees. As well as physical abilities, Sasha had good knowledge of wild animals and utilizing her hunter experience (as shown when the Female Titan screamed), she knew exactly what the scream meant (a distress cry; danger) and that they should be wary of it. She also seemed to be athletic and useful with bow and arrow, injuring a 3m class Titan alone with just a bow. She was later shown to be able to disarm a person without any injury to said person, with archery alone."

Coming in at number one among the top Attack On Titan girls of all time is Mikasa Ackerman.

I have a feeling you guys could have guessed Mikasa was going to be number one among the Attack On Titan girls.

Her routine continuously comes in among our top programs on the entire website, and remains one of the most popular even as more and more requests (sometimes well over a hundred a day) flood in.

Do you have any favorites that didn’t make the list?

We also have over 1,000 Workouts inside our Workout Database and HUNDREDS of Anime Inspired Workouts.

If you want to check out some of our Attack On Titan specific stuff, here's some more links I shared before:

And, if this was helpful, don't forget to leave a comment below.

Welcome to The SHJ Army! 🙂