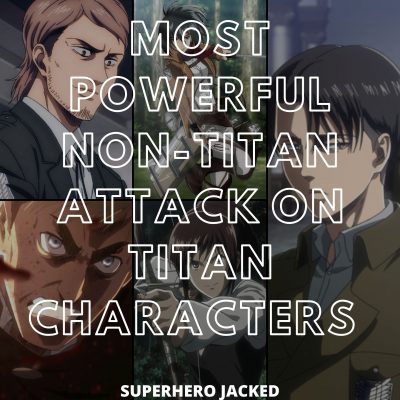 This list was actually easier to create because many people have debated this and have come up with lists of their own. So, finding resources for this list was no problem.

Most of these characters are loved by the fandom, some are hated, but all are undoubtedly strong in their own right. If you’ve watched the series, you’ll know while not everyone had a strong start (few rarely do), the adversities they faced over the series have shaped them to become the heroes they are today. Much like all of us in the SHJ Army – we start small, but we go big in the end and finish strong.

When we talk about the most powerful we’re talking the number of Titan kills, skill at strategy, and being cool under pressure. These characters have plenty of that and then some.

We have our Attack on Titan Inspired Workouts in a mini-database within our larger Anime Workouts Database like we’ve now been able to do for a handful of the most popular shows.

For this one, I didn’t have to search too hard because a single mention of Attack on Titan on Google led me to numerous fan websites, message boards, wikis, and reddit threads. The most notable sources for these are CBR, Ranker, and TopTens. These resources have been, for me, the most reliable in terms of ranking series and characters.

Starting off our list of the most powerful non-titan Attack on Titan characters of all time we have one of the most promising Warrior Cadets on Eldia – and possibly the most disliked character in the fandom – Gabi Braun!

She appears at the start of the third season as one of Eldia’s warrior cadets, who are training to becomes successors of wielding the power of the titans. She is one of the quickest and strongest cadets, but she does act out rashly when she is challenged. During the raid on Eldia by the Paradis Survey Regiment, she manages to use the ODM gear of a fallen scout to board the Regiment’s blimp and murder Sasha Blouse.

Do you agree with Gabi’s placement in the top ten or would you push her down to the honorable mentions and bring someone else up into her slot?

Sasha Blouse was a recruit for the Scout Regiment who became an invaluable asset to them because of her marksman skills. She was raised in the forest and is a naturally talented hunter and tracker. She joins the Survey Corps and travels to Eldia to rescue Eren Yeager, who, unsurprisingly, went rogue…again. They are successful at retrieving Eren, however, she dies on their way back when she is shot at point-blank range by Gabi Braun.

Jean was actually a resident of Wall Maria when it was overrun by titans after the Armored Titan broke through. He joined the Scout Regiment after graduating 6th in his class, and now serves as a commander of the Survey Corps. He is second only to Armin when it comes to battle strategy, and is a born leader.

Just missing the top five and coming in at number six among the most powerful non-titan Attack on Titan characters of all time is Commander Dot Pixis.

While no longer in his prime, Dot Pixis commands the respect of the entire Scout Regiment and Military Police. He is instrumental in the coup to retake the capital and place Historia Reiss as the rightful ruler of Paradis. His years of experience prove invaluable to Erwin, who enlists him in proving beyond a shadow of a doubt that the current ruler is a puppet king.

While not especially powerful compared to others on the list, Historia nonetheless proves her willingness to help save humanity. After she is forced to renounce her family name, she takes on the identity of Krista Lenz and together with Ymir, joins the Training Corps to become a soldier. After Ymir’s demise, Krista vows to be true to herself – and joins the Scout Regiment to prove herself a capable soldier. After the battle against The Armored Titan and The Colossal Titan, she takes her rightful place as Queen of Paradis, and is accepted by the people.

At number four among the most powerful non-titan Attack on Titan characters of all time we move into the first of the Ackerman family!

Kenny Ackerman is the leader of the Anti-Personnel Control Squad and the uncle of Levi Ackerman. He is a vicious killer, and is willing to do whatever is necessary to achieve his own goals – even going as far as betraying his allies and murdering children.

Being a former member of the Military Police, he is extremely proficient at using the ODM gear that the scouts use, and is able to fend off the attacks and kill the scout troops sent after him. In the second season of the show, we see a final standoff between Levi Ackerman and Kenny Ackerman – resulting in the near-death of Kenny. He makes it out, however, but is killed because of his serious injuries in the presence of Captain Levi.

Coming in and making the top three among the most powerful non-Titan characters of all time (and #2 in our Most Popular Attack on Titan list) is our second Ackerman, and Eren’s childhood friend, Mikasa! While Eren is always so headstrong and starts fights without knowing how it will end, Mikasa always seems to have a strategy before entering a fight, and is capable of defending herself and Eren.

She is gifted in combat and is able to master the ODM gear quite easily, and is always seemingly right there when Eren needs her. This has proven true even into adulthood – with Mikasa and the rest of the Survey Corps traveling to Liberio to rescue Eren from the Eldians.

Coming in at number two among the most powerful non-Titan Attack on Titan characters of all time (and also listed as number four among the most popular) is the 13th commander of the Scout Regiment himself, Erwin Smith!

Erwin Smith gave his life for the cause of humanity’s freedom from the fear of titans- quite literally. He lost an arm when he led the Scout Regiment to retrieve Eren Yeager after he was captured by Reiner Braun and Bertolt Hoover, yet he still managed to fight off and kill a titan. He was also the one to lead the charge on the Scout Regiment’s last stand against the Beast Titan.  Upon dying, he instated Hange Zoe to replace him as the 14th Commander of the Scout Regiment – and made Captain Levi promise to defeat the Beast Titan.

Coming in at number one among the most powerful non-Titan Attack on Titan characters of all time is Captain Levi Ackerman! He is also #1 on our Most Popular Attack on Titan List.

Captain Levi is the deadliest Scout Regiment/Survey Corps member. He has more Titan kills than anyone and is unrelenting in the face of overwhelming odds. In the show, he is able to survive even after his entire squad of scouts become titans, and is able to capture and subdue Zeke Yeager, Eren’s older half-brother – even in his Beast Titan form.

Would you place Levi at number one or does Mikasa give him a run for his money?

The Most Powerful Non-Titan Attack on Titan Characters of All Time (Runner Ups):