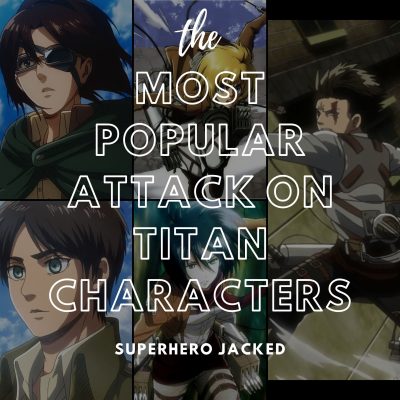 The Most Popular Attack on Titan Characters are just the starting point for us.

We’re ready to go on an Attack on Titan frenzy here at Superhero Jacked.

We’ve gone through a handful of the other most popular anime based on SHJ Army requests, and now AOT is definitely the big one you guys want.

If you head into our Anime Workouts Database you can already see a handful of our mini-workout databases from those popular anime, and now I have even added a slot for our Attack on Titan Inspired Workouts.

To get us started I’ve already obviously started building up the characters from AOT that we have here at SHJ, but I also want to lead with this list discussing the fan-favorites.

From here I’m going to move into the most powerful like I always do for our anime characters/shows, and I’ll even be adding Attack on Titan to our Workout Placement Quizzes to help you guys out.

Breaking down this list was actually quite easy being that we’re going to be working directly with popularity counts from you guys and other sources and I don’t have to mix and match opinionated power rankings like I sometimes have to do for our lists on the most powerful characters of certain series.

The main source we’ll be using outside of the requests we get here at SHJ is MyAnimeList, which is one we love to refer to.

MOST POPULAR ATTACK ON TITAN CHARACTERS

Starting off our list of The Most Popular Attack On Titan characters is Queen Historia.

Historia has been popular for a long while before taking her rightful place on the throne. While other characters are taking Titan Forms and going through transformations into behemoths, Historia went from a timid character we knew as Christa Lenz and transformed into her Historia Reiss form as Queen Historia right before our eyes.

Queen or not Historia / Christa has always been a fan favorite and has had a pretty incredible character arc as well.

Next up on the list of Most Popular Attack On Titan characters is Commander Jean Kirstein.

I was actually surprised to see Jean on the list above Historia and even some of the characters I named in our runner-up section, but I suppose that just goes to show you how Jean took the whole AOT fan-base and AOT world by storm with his impact and character development in general.

Coming in at number eight among our Most Popular Attack On Titan Characters is one of my personal favorites (although I might say that a lot): Annie Leonhart!

Annie was popular and front and center very early on and then you tack the reveal of her true identity – and while it wasn’t revealing herself as Queen Historia it was still HUGE that she was The Female Titan – and you have yourself a character that was already awesome just get that much more complex.

Joining our list at the number seven spot among our Most Popular Attack On Titan characters is Sasha Blouse.

If you weren’t going to notice on your own: this list is actually going to be a nice even split among the male and female characters which is always awesome to see with any of our anime!

I recently posted a list of The Most Powerful Female My Hero Academia Characters and I’m sure we’re going to need to see one for Attack On Titan as well one day soon.

Sasha will likely make that list as she is not only one of the most popular due to her wit and humor, but also because she is one of the bravest members of The Survey Corps.

Just missing our top five (although I was rooting for her there) and coming in at number six among our Most Popular Attack On Titan Characters is Hange Zoe.

Hange Zoe, our 14th Commander of The Survey Corps, was extremely passionate about the pursuit of knowledge and viewed Titans in a different way than most.

Zoe’s passion, intelligence, drive, and overall lack of fear to be different makes her EASILY one of the most popular characters in the AOT fandom.

Starting off our top five most popular Attack On Titan characters is Armin!

Armin started off by feeling like one of our weaker characters, similar to how we have a Zenitsu, Krillin or character in another series seem to lag behind but then come out of no where and prove us all wrong.

Not only is Armin the Colossus Titan but his genius level intellect is really what makes him one of the most powerful Attack On Titan characters in the entire series!

Next up on our list of The Most Popular Characters in Attack On Titan is Erwin Smith.

Erwin is our 13th Commander of The Survey Corps and the Commander that eventually names Hange Zoe to follow in his footsteps.

What made Erwin one of the most popular characters is the sheer fact that he was also one of the most badass. While he might not live up to the badassery level of the next three characters on our list, he was an incredible leader that was able to make the characters around him that much more powerful.

Joining us in the top three most popular Attack On Titan characters of all time is Eren Yeager.

You could have likely guessed at the top three and been right, but that doesn’t change the fact that they OBVIOUSLY deserve their slots.

Eren has the power of THREE Titan Forms and is essentially the savior of humanity. There’s a solid chance Eren’s popularity will continue to grow, but it will be hard to move up from the third spot on the list when you have the next two characters to go head to head with in terms of fan favoritism.

Joining her brother among the top two most popular Attack On Titan Characters of All Time is Mikasa Ackerman.

Mikasa was also just named on of The Most Powerful Female Anime Characters of All Time on our list here at SHJ, and she would also be placed on a list among the most badass females as well if we made it.

Mikasa is EASILY one of the most popular female characters we have here at SHJ and continues to motivate THOUSANDS of girls to get out there and kickass and unleash their inner superhuman on a daily basis.

The most popular Attack On Titan Character Of All Time is Captain Levi Ackerman!

Known as Humanity’s Strongest Soldier, Levi quickly became a fan favorite with his sister Mikasa as they were the most powerful members of the entire Survey Corps, as well as the bravest and ready to fight for humanity.

Most Popular Attack on Titan Characters of All Time (Runner Ups):