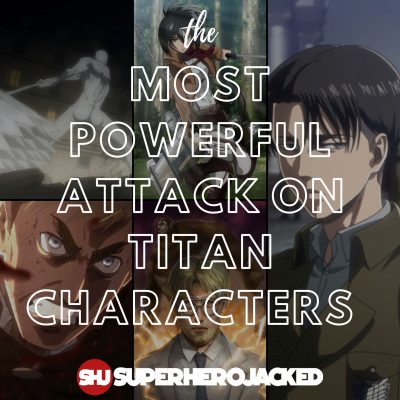 Attack on Titan might just have three seasons, but they are jam-packed with tons of action, story arcs, and character development.

I’ll be honest – I didn’t quite jump on the bandwagon when it first came out in 2013. It took a lot of cajoling and years of attending comic cons to see the reach of the show – and in 2018, I finally caved and binge-watched the entire series. I was glad I had waited. There were so many cliffhangers at the end of each episode, and waiting a week for the next episode to air would have driven me nuts.

The characters on the top ten deserve their slot, but take note that the characters on this list aren’t only Titan Shifters, but regular humans who are fighting for survival. The titans we have on here are definitely powerful, but the fact there’s handful of human here too suggest that it take more than raw strength to be powerful. There’s something to be said about humanity’s will to live here. I suppose it just escapes me.

BUT, before I rant about the power level throughout the show TOO much (might have already done that), I do want to point out that Attack on Titan is one of the most popular shows for inspired workout requests here on the site. This list takes into account strategy and leadership skills as well as combat abilities and raw power.

We have our Attack on Titan Inspired Workouts in a mini-database within our larger Anime Workouts Database like we’ve now been able to do for a handful of the most popular shows. We’re always updating the website with more listicles, so be sure to check it out often.

For this one I scoured the internet for help and almost every single listicle had a different take on who The Most Powerful Attack on Titan Characters are so what I decided to do was compile ALL of them together and place each character in the slot they averaged most as well as keeping the list to base TEN most powerful and then increasing the length of the normal runner-up slots I normally do in no specific order.

MOST POWERFUL ATTACK ON TITAN CHARACTERS

Starting off our list of The Most Powerful Attack on Titan Characters is Jean Kirstein. Jean is a co-recruit of Mikasa, Armin, and Eren and trained with them as part of the 104th batch of the Training Corps. While he and Eren may not always see eye to eye, they both have the same goal – to rid the world of titans and safeguard their cities. While Eren is more of a ‘charge ahead’ type of warrior, Jean is level-headed and is a born strategist and leader. When Wall Maria is breached and titans start storming the city, it is Jean who comes up with the plan to defeat the smaller group of titans with the handful of scouts he had with him. It is this calm in the face of crises that sets Jean apart as a leader and eventually gets him promoted to a commander of the Survey Corps.

Do you agree with Jean’s placement in the top ten or would you push him down to the honorable mentions and bring someone else up into his slot?

Coming in at number nine on the list of the most powerful Attack on Titan characters is Reiner Braun. Reiner was an Eldian recruit trained by the Marleyan Soldiers as a weapon to defeat the “Paradis scum”. While on a mission with his classmates Annie and Bertolt, they accidentally camp on a buried titan. This results in one of their classmates being eaten. With no way to return home, they decide to fulfill their mission by breaking through the walls of Paradis using their titan forms. After causing a panic, Reiner, Annie, and Bertolt slip into the city and join the fleeing crowds.

Years later, Reiner, Annie, and Bertolt join the training corps which Eren, Mikasa, and Armin are part of. Because of the passage of time, Reiner now has difficulty telling between his identity as a Paradis scout member and his role as an Eldian soldier. He is unsure of which part of himself is truly him. Because of his conflicting thoughts, Reiner tries to kill Eren, and then later questions why he is angry with him.

What makes Reiner so powerful is the fact he can transform into the Armored Titan – a titan that has bone all throughout the exterior of its body, making it extremely difficult for normal scout weapons to pierce its hide and kill the person inside.

At number eight among the most powerful Attack on Titan characters is the War Hammer Titan. One of the Nine Eldian Titans, the War Hammer Titan is capable of creating any object as weapons of destruction using hardened titan flesh as the source material. What makes it so powerful and hard to defeat is that its user isn’t attached to the neck of the titan, but is safely encased in a hardened crystal-like shell underground.

This is what Eren Yaeger notes about the titan: “It controls titan hardening to create weapons, or anything it needs, from underground.” This makes it extremely difficult to defeat without something that can pierce the hard crystal shell of the user. Thankfully, Eren is able to defeat the Jaw Titan and use its powerful jaw to crack the crystal protection and acquire the War Hammer Titan’s powers.

Next up among our most powerful Attack on Titan characters is Armin Arlert, Mikasa and Eren’s childhood friend, and the current user of the Colossal Titan power. While Armin isn’t strong in any physical sense, he is a genius strategist and is able to make observations on the fly. This is particularly useful when the Scouts are up against a number of strong foes, as Armin uses his powers of observation to aid his fellow scouts and help them on their missions.

After acquiring the Colossal Titan power by consuming Bertolt, Armin is even stronger and is one of the most crucial pieces in the Raid on Liberio to rescue Eren when he goes rogue.

Just missing the top five and coming in at number six among the most powerful Attack on Titan characters is the 13th commander of the Scout Regiment, Erwin Smith. Erwin has dedicated his life to fighting for humanity’s freedom from the fear of titans. He shows this in his leadership skills and his boldness in the face of overwhelming odds. Even when he gets his arm ripped off while leading a rescue party for Eren, he is so focused that he is able to kill a titan despite losing an appendage.

Making it to the top five among the most powerful Attack on Titan characters is Eren Yeager’s half-brother, Zeke. Born and raised in an Eldian encampment, Zeke was taught to hate the Paradis humans by his grandparents. When he became of age, he joined up with the Marleyan Army and became an honorary Marleyan by choosing to accept the Beast Titan power. He uses this to great effect on the battlefield when he crushes large boulders and hurls them like missiles at the Scouts who can do nothing but try to avoid the bombardment of debris.

At number four among the most powerful Attack on Titan characters is Annie Leonhart. Like Reiner, Annie is in possession of a titan power – the Fema

e Titan. When in her titan form, she is capable of great speed and maneuverability and can catch up to any of the Scout forces. She uses this to pick off the scouts while they are on missions, and is even able to dodge their ODM gear.

Coming in and making the top three among the most powerful Attack on Titan characters is Mikasa Ackerman, Eren and Armin’s childhood friend, and the person who usually saves them from fights that Eren starts when others bully Armin. Mikasa is a gifted soldier, easily mastering the use and balance of the ODM gear as well as graduating as one of the top students in the 104th Training Corps.

She is second in fighting ability only to Captain Levi, and is a formidable soldier, with dozens of titan kills under her belt. What makes her powerful in battle is not only her skill, but her determination to protect Eren and Armin at all costs.

I should make a point to say: Eren is the most powerful Titan in the series.

While he’s still an impulsive character, it does seem like he is following a plan and isn’t simply going in blindly like he used to. He is also more accepting of criticism and feedback and is willing to talk about what his motives are and what his plan is with his close friends. Whether or not his new motivation is to free Paradis from the Eldian threat or start a war that will lead to its destruction is yet unclear.

Coming in at number one among the most powerful Attack on Titan characters is Captain Levi Ackerman!

There’s no doubt about it – Captain Levi is the strongest human in the series. I looked at many polls across multiple websites and Levi always came in first. He is the most powerful character in the series because no matter the odds of survival, Levi always comes out on top. Even in battles against Eren after all the training he’s gone though, Levi still smokes him.

He is the embodiment of the persevering human spirit. Levi is willing to do whatever it takes to protect humanity, much like Erwin, and is willing to sacrifice even his fellow officers for the chance of success. When Zeke transformed his regiment of officers into titans, Levi was still able to defeat them all and subdue Zeke in his Beast Titan form. That’s a claim no one else in the series can make.

Would you place Levi at number one or does Eren give him a run for his money?

The Most Powerful Attack on Titan Characters of All Time (Runner Ups):