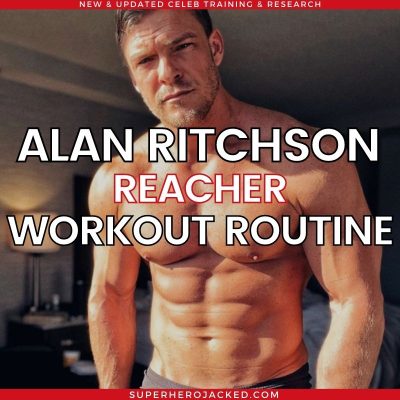 Alan Ritchson got JACKED for his role in Reacher.

Ritchson put on 30 pounds of muscle for the role, revealing he was only 205 pounds prior.

We’ve seen Ritchson here at SHJ before, and he has always been shredded, but now he got massive.

We have research on our original Alan Ritchson Workout and Diet article regarding his training to be Hawk in Titans and Thad Castle in Blue Mountain State – but now we’re back for a huge update regarding his Reacher workout.

We’re going to be adding this to his original article as well, but considering the amount of information available to share, it’s only right to also give our Alan Ritchson Reacher workout a full article.

Oh, and for all you nerds like me, Ritchson also starred as Aquaman in Smallville, Raphael in Teenage Mutant Ninja Turtles and Gloss in The Hunger Games!

Alan Ritchson plays Jack Reacher, who is 6’5, and with his massive physique at 6’2 he does an incredible job.

Just to put it into perspective, Dwayne Johnson is around 240 with 2-3 inches on Ritchson – which means Ritchson is holding onto a ton of mass! 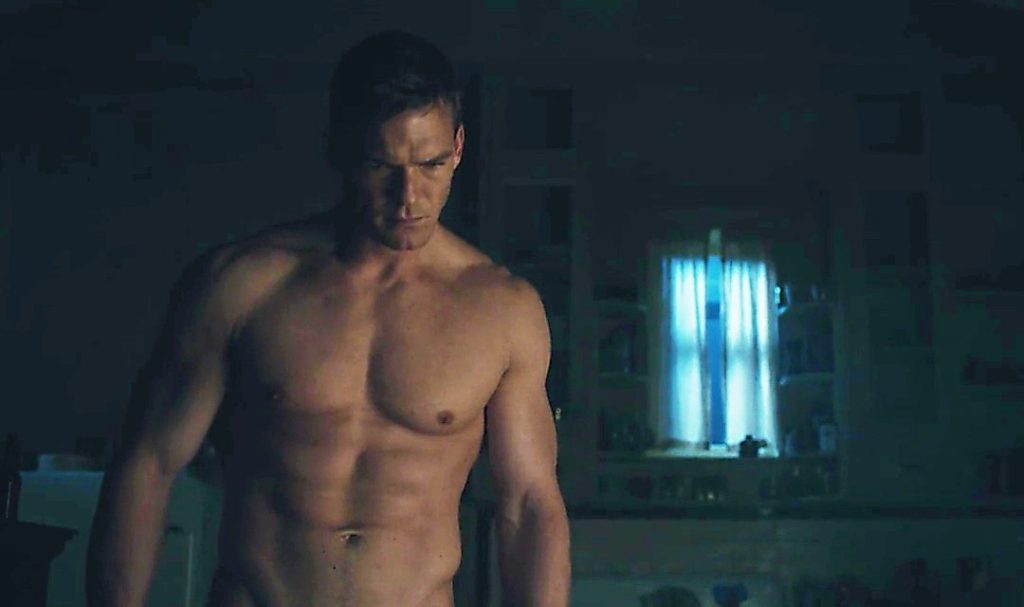 My book Superhuman Secrets is Updated & Expanded!
Unlock The Secrets to The Hollywood Physique & Get SEVEN FREE Bonuses!

We have researched Alan Ritchson’s diet before, but now I want to bring in some information specific to his role as Reacher.

One thing I will mention before even getting into it is that Ritchson specifically stated, multiple times, that he tacks on mass extremely easy just by training and increasing his calories.

And it’s no different for what he did for his Reacher diet.

Here’s what he tells Men’s Journal:

I did an attack on all fronts to get ready for this one. I do what I can to stay healthy and in shape all the time since a lot of my projects are in that superhero genre. I try to stay lean, so I’m usually walking around at 205 pounds. For this I wanted to bulk up though, and I ended up putting on 30 pounds to end up at 235 pounds. I was grinding it out five days a week for the eight months that we had to prep. I don’t usually use weights because I get big so quick but I pulled them out for this. I got to unleash in the gym. The real requirement is you need to get the calories, proteins, and macros, so it was a conveyer belt of food. It’s a full-time job to get 4,500 calories and 300 grams of protein in your body. I was lucky that I had the help.

Let’s break that down a bit further for you guys to see exactly what he was doing:

Get the calories, proteins and macros – 4,500 calories and 300 grams of protein in your body.

That is a TON of food.

We’ve seen this from guys like Hugh Jackman and Henry Cavill as well, having to tack on an insane amount of calories and protein (the high protein diet is the most popular among male celebrities.)

You can see a full breakdown on the most popular diets among the different celebrities here, or you can read all about my research in my book Superhuman Secrets if you’re interested in the full scoop.

Outside of having to take in tons of calories and protein, Ritchson was also training a LOT, which means he was burning tons of calories as well – and needing to replenish and feed his muscles to allow them to grow.

So you should always be trying to find the most sustainable approach specific to YOU and your overall goals.

You can find tons of free resources among our Nutrition Pillars on how to do just that. 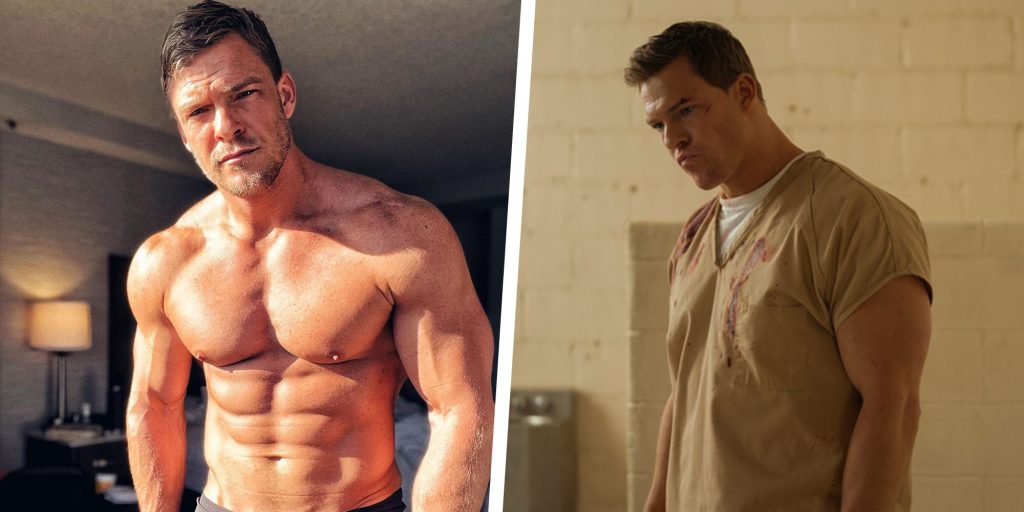 Which Male Celebrity Workout is Best For You?
Take Take The Free Workout Placement Quiz and find the best free workout for you.

First and foremost we are going to be pulling right from Ritchson himself who set out to Instagram to share all about his Reacher workout.

Here’s what he says in a post regarding workout tips and his daily workout for Reacher:

To the guys always asking for workout tips. I’m no expert. I’m never where I want to be. I’m grinding it out just like you. But let me simplify it for us… move something that fatigues your body and heart most days of the week.

But here’s a fun fact – hypertrophy and strength training are two different things. Usually they compliment each other. High weight low reps (think – 4-6) will increase strength. Some growth in size (hypertrophy) will occur. But not as fast as if you did lower weight and higher reps (think – you can’t do more reps than 15-25 each set for 4 sets). Body weight exercise like push-ups, pull-ups and dips can add plenty of size if you don’t have access to a gym. All you really need is you and the discipline to push.

To the people that keep asking – no I don’t do steroids and never have. If you know what those do, it’s obvious.

Just be patient and do the things today the you ten years from now needed you to do. Don’t expect the you two months from now to be the you you want to be in ten years.

You probably see exactly why I started with this piece!

That is some awesome advice from Ritchson, and I’m even happy he mentioned the steroid aspect of this because we find a ton of people using that as an excuse to not work hard and push to try to achieve their goals.

We’re also going to be pulling from a Men’s Health “Trained Like” video that Alan Ritchson did for his Reacher training.

Here’s what he says during that video:

“I learned a lot in that process about longevity and working out in a way that prevents injury but achieves growth. I think for most of us, muscle growth has been the goal. My goal is actually volume. It’s not about punishing ourselves in the gym or taking ourselves to the point of literally destroying our bodies, it’s about just consistent, vigorous activity for short, healthy amounts of time.”

In the video we can then see him doing dumbbell hammer presses, skull crushers, EZ bar curls (21’s like Terry Crews) and overhead extensions.

After his super sets Ritchson says:

“With supersets on cables, dumbbells, barbells, we’re confusing the muscles as much as possible,”

And you guys know how much we love supersets here at SHJ.

You’ll find supersets, tri-sets, giant sets and more within all of our workouts in the Workout Database.

Ritchson also adds in some bodyweight work at the end of his workout, and tells us about his favorite calisthenics movement:

“If I could only do one thing for the rest of my life, I think it would be dips,”

To finish up Ritchson hits some cardio, which is typical of Ritchson considering we know he used a ton of bodyweight training and cardio movements for his training with his other roles.

But alright, let’s get into the full workout – and remember: if you want to turn this into a full weekly program you can head over to our original Alan Ritchson workout and diet article OR pair it with hundreds of other workouts within our Celebrity Workouts Database.

This workout is shared by Men’s Health and Alan Ritchson.