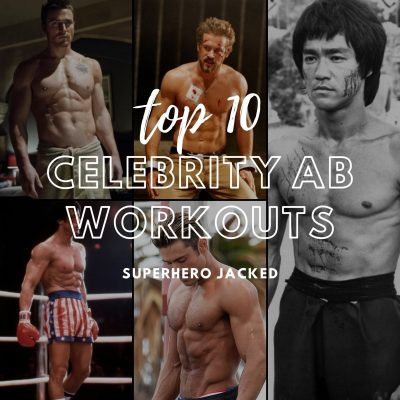 Everyone wants six pack abs and a flat stomach.

Actually, that’s one of the reasons our article “The Secret To Six Pack Abs and A Flat Stomach” is so popular…

But the time has come where we are not only working with listicles to make certain workout routines more accessible now that our Workout Database has well over 500 workout routines and growing by the minute; but also to the point where we’re looking to begin adding categories for workout routines broken up by specific body-parts!

I know, I know, exciting stuff.

It only took over five years.

Eventually these different categories of different body-part targeting workouts will even make their way to the Workout Database with categories filling up different sections like we have for our celebrities and characters workouts, but for now we’ll start here.

You can also check out article on fitness gear and supplements, our full Resources page, and even our Nutrition Pillars; among other things.

But, for the sake of our listicles, I’ll share a few others we’ve seen recently (or that are relevant).

But just to be clear about how this works: we’re going to be basing this listicle around a few things (none of which are me simply saying “This is an exact order of the best female workouts”).

So sit back and get ready because you’re about to have a TON of variety to get those abs shredded.

Ryan Reynolds ab workout comes it at number one simply because I find myself constantly going back to it.

Reynolds is constantly switching it up with his trainer, but one thing has always remained the same: his goal has always been to be lean and shredded!

You’ll notice this is actually the goal of quite a few of the celebrities on this list, but there are a couple that do stray from that, which I’ll point out, although it’s partly due to the roles they’ve taken on.

That being said: if you’re looking for a killer ab workout, look no further….

The Deadpool Ab Workout is ready to kill your abs!

You may as well bet on your core in the Dead Pool.

Zac Efron’s ab workout is one that is right at the top of the list because of multiple categories being crushed.

First off, Efron’s workout routine and diet plan is one of the most popular we’ve ever had here at SHJ.

Secondly, effectiveness is right up there with the rest of them, if not even more.

Third, we have THREE, yes three, different Zac Efron workout routines here on the site, and one of them is his ab workout shared for Baywatch that he did with Alexandra Daddario.

I’ve linked to both his main workout and his ab workout both above and below this, but we also have a home workout routine shared by his trainer as well!

Oh, and the coolest part about Efron’s ab workout is that it’s built around being a partner workout so you can scale it to solo or do it with a friend!

You can check out the Zac Efron Ab Workout or the Full Zac Efron Workout and Diet Plan here.

Michael B. Jordan’s initial transformation was to get absolutely shredded for Creed.

From there his approach switched a bit and he bulked and got JACKED to play Killmonger in Black Panther.

For that reason Jordan comes in at number three.

He has two different workout routines on his main Michael B. Jordan Workout and Diet article (one from Creed which is a fantastic way to shred and lower your bodyfat down to show off those abs, and one for Black Panther which is not only a great bulking routine, but it also has a great ab workout), and also a listicle of his favorite calisthenics movements.

If you’ve already read the guide to getting six pack abs you’ll know lowering your body-fat enough is a HUGE part of it.

Both Jordan’s workout routines (both found on his main article) can be combined to do just that.

For just the ab workout make sure to check out the second variation, which is his Black Panther workout.

You can check out the Michael B. Jordan Workout Routine and Diet Plan here.

Who doesn’t want to be able to do the famous Bruce Lee Dragon Flag!?

Even Rocky, AKA Sylvester Stallone (who, spoiler alert, will be on this list) has been seen doing The Dragon Flag!

We have a Bruce Lee Workout and Diet Article, but we also have a completely separate article devoted to Lee’s ab routine as well; with a break down on how to do his signature ab exercise.

Lee was not only one of the world’s greatest mixed martial artists, but he was also extremely strong, flexible and a leader in the way of training and exercise.

Advanced calisthenics movements were no match, so be prepared for volume and advanced training if you plan to take on Lee’s workouts!

I mean, it’s a trick question.  Everyone wants abs like The Green Arrow.

And, even if you happen to be the only person on Earth who doesn’t, I’m sure you want abs like Casey Jones…

He also trained a ton with his cousin Robbie Amell, who has shared a parkour style workout routine as well.

Amell also has a bulking style workout that comes with weight training from when he began switching up his style, but the ab workout that makes this list comes right from his initial workout!

Oh, and don’t worry, you won’t get lost, both workouts are right there on his main article.

You can check out the Stephen Amell Workout Routine and Diet Plan here.

If you couldn’t tell: KJ Apa has washboard abs.

He definitely falls into the same category of superhero-like-aesthetic as Ryan Reynolds and Zac Efron, who not only all train very similarly, but also are main subjects for what we believe to be The Superhero Physique for our Legacy Program.

KJ Apa (and our next celeb on the list) works with celebrity trainer Alex Fine who is also equally shredded.  Fine is also the “founder” of the term “6 Minute Abs” which is a play on “7 Minute Abs” from the movie There’s Something About Mary.

Luckily for us, both KJ Apa and Fine are equally as awesome (similar to Efron, again) with sharing their workout routines.

You’ll find multiple workouts for KJ Apa on his article, as well as a bonus section that gives his favorite ab workout from Fine as well.

You can check out the KJ Apa Workout Routine and Diet Plan here.

Well, not only is Consuelos jacked and deserves the spot regardless, but he also works with Alex Fine who designed both Consuelos’ and Apa’s workout routine(s).

And, his ab workouts are one of his specialties!

The ab routine shared on Consuelos’ workout routine also happens to be one of my favorites.

You can check out the Mark Consuelos Workout Routine and Diet Plan here.

We don’t host that many fighters workout routines just because it’s extremely hard to replicate training like mixed martial artist.

In the case of Bruce Lee who had a weight training and ab regime it’s a bit different, but most mixed martial artists routines are just constantly switching (nearly daily) and also involve a ton of work with partners and coaches that you just can’t give through the internet.

That being said, Conor McGregor’s ab routine is pretty specific and pretty gnarley.

It’s right there like a golden egg in with the rest of his workout routine, but a routine that can easily be added into almost any regime.

I’m sure we all know how important it is to have a strong core in martial arts, so picking up any fighters core training is often a great idea!

You can check out the Conor McGregor Workout Routine and Diet Plan here.

Alright, I know what you’re thinking…

“How is Sylvester Stallone’s ab workout ninth on the list!?”

But, this one makes the list nevertheless because it’s right from Stallone’s book and it is effective as hell!

You can check out the Sylvester Stallone Workout Routine and Diet Plan here.

This one might come in as more surprising than even Mark Consuelos at Number Seven.

But there is a very specific reason.

Brec Bassinger is very serious about her core strength.

She has done multiple plank challenges and in the majority of workout videos we were able to find for her she was incorporating some kind of core exercise.  That’s why, while he workout routine might not specifically have a super-awesome-ab-targeting-workout, it DOES have her plank challenges and core strengthening movements within the base routine.

You can check out the Brec Bassinger Workout Routine and Diet Plan here.

If you need extra help creating your plan you should also check out our Superhero Academy and our SHJ Legacy Program (here’s the differences between the two).