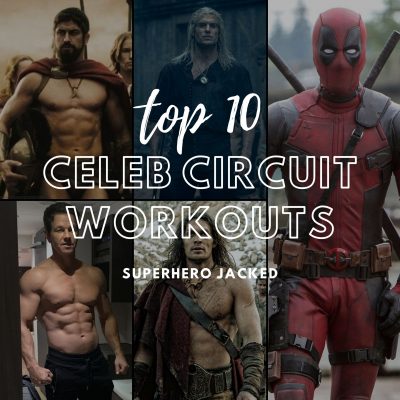 We will continue to see more and more celebrity circuit workouts.

That much we are sure about.

The reason I want to give you this listicle is more about giving you the very best to start.

Out of 500+ workouts in our Workout Database, the large majority function around full weekly celebrity and character inspired workout routine schedules, so it’s nice to be able to jump into one place and find a one-day-and-go workout that your favorite celebrity has used.

That being said, once we get more and more individual-body-part workouts and circuit workouts, our Workout Database will also shift into having those specific categories added to it as well; so listicles aren’t the end game!

But these circuits are more important than you’d originally think.

In my book Superhuman Secrets I talk all about the research behind the shift we continue to see among celebrities utilizing more circuit focused training.

That’s also why you’ll find the style of training geared towards achieving The Superhero Physique and Peak Superhuman Performance within our Superhuman System.

It only took over five years of research and development….

Similar to this, we also recently had our list of our Top 10 Celebrity Ab Workouts on the site as well; and you’ll notice a couple of them even make both lists!

Also, keep in mind, these circuits are IN ADDITION to the celebrities actual workout routine and diet plan article which can be found in our Workout Database.

So if you see a celebrity on the list you want to train like with a full weekly plan, use the search bar or Workout Database to jump over there and grab the full routine.

If you’re curious how I’m scoring this one:

In no specific order, but scoring based on all three.

Did you guys know Tom Holland was going to be number one..?

Being brutally honest with this one: Tom Holland comes in at number one on this list because you guys love him so much.

Our Tom Holland Workout Routine and Diet Plan was also one of the top used male celeb workout routines on the site (coming in at number two behind Zac Efron).

On top of that, the circuit is awesome, AND he was was of the first celebs that we hosted an individual circuit workout for, so it felt fitting.

Whether you’re trying to just see how you stand up against a workout Spider-Man used, or if you want a circuit to fit into your current regime: this one is great.

You can check out the Tom Holland Spider-Man Far From Home Circuit here.

Next up is Henry Cavill’s Witcher Circuit.

Cavill referred to this as his secret weapon.

Our original Henry Cavill Workout Routine and Diet Plan we saw with research into his transformation for Man of Steel (after being absolutely shredded for Immortals) was super-heavy AND super-high-volume, and now this one comes off that with some high intensity.

It’s a 20 minute circuit, which makes it immediately awesome, and it’s a full body, high intensity circuit that doesn’t get boring; which is perfect for us to be able to fit it into our regime on a regular basis.

Plus, who doesn’t want to train like The Witcher…?

You can check out the  Henry Cavill Witcher Circuit here.

Next on the list is the newest circuit in terms of what role the celebrity is using it for.

Without Remorse is a movie set to release September 18, 2020; so this is a circuit Jordan (at the time of sharing this) just recently used for his upcoming role!

Like many of the other actors on this list, we’ve seen quite a bit of Jordan here at SHJ.  We’ve had our Michael B. Jordan Workout Routine and Diet Plan, which actually has variations for his transformation for Creed AND a workout he shared from his workout for Black Panther.

On top of that we also have a list of his top five calisthenics movements, with a bonus circuit we put together for them.

It’s safe to say we really love Michael B. Jordan and how he trains.

Shout out to his coach Corey Calliet as well!

You can check out the Michael B. Jordan Without Remorse Circuit here.

Did you guys know I had a Deadpool Pikachu tattoo?

Well, I do.  And Ryan Reynolds plays them both.  I may as well just have his face tattooed on me, because he’s awesome.

Fittingly enough, so are his workouts and so is his physique.  With the help of celebrity trainer Don Saladino Reynolds has kickass workouts ranging from our Ryan Reynolds Workout Routine and Diet Plan to this Deadpool 2 Circuit built around carries and diversification.

So if you’re anything like me and want to get as shredded as Deadpool; this is a good bet to get started with.

Coming in right with Ryan Reynolds on the badassery scale, Jason Momoa is awesome.

Whether you’re looking to get shredded or just have a circuit that allows you to mix in some Guinness into your diet due to the intensity and insane volume the workout has: this one is a good bet.

Prior to his heavier training for Aquaman (both can be found in our Jason Momoa Workout Routine and Diet Plan article), Momoa didn’t even really use weight; and this is a great example of his transfer into weights that were built specifically for a style he would like.

This is high intensity training to not only tone up and build muscle, but also get shredded.

You can check out the Jason Momoa Conan Circuit Workout here.

These next two circuits are perfect for people who don’t have any gym access right now.

Zac Efron’s Workout Routine and Diet Plan, as I mentioned earlier, is the most utilized workout routine among the male celebrities we’ve seen on the entire site.

So of course any other article we revolve around him has to be top notch.

And his home bodyweight circuit comes right from the lips of his trainer who put a workout together and is perfect for people who are looking to get involved with strictly bodyweight stuff.

The next one on the list follows suit with this, but Zac Efron’s came in a slot ahead just because The SHJ Army loves them some Efron training.

You can check out Zac Efron’s Home Calisthenic Circuit here.

Now I know what you’re thinking….

Well, maybe not, but Efron’s full weekly workout routine is THE TOP used at SHJ, so it was only fair I adhere to a proper scoring system.

Personally, this Hemsworth home circuit workout hits all the marks for me and is awesome; so don’t think I’m putting one in front of the other in terms of badassery.

Plus, our Chris Hemsworth Workout Routine and Diet Plan has TWO variations of routines that Hemworth has followed at different times while getting ready for his roles as Thor.

So you can’t go wrong with any of them…

You can check out the Chris Hemsworth Home Workout Circuit here.

Next up is the man, the myth, the legend: Mark Wahlberg.

In the full article on his F45 Circuit I talk about how big of a case study he is in my book Superhuman Secrets because he literally is, like myself, a human guinea pig.

Like so many others; and a reason why our Superhuman System is so efficient, effective and sustainable.

This one is a fun one if you’re looking to step it up and get a taste of the F45 style system, but other than that I personally prefer one of the handful above.

You can check out The Mark Wahlberg F45 Circuit here.

This circuit is brutal.  I will start right there for you.

It’s in the title I gave it, and now I’m telling you again.

Tom Hopper did a home based circuit workout partnered up with Men’s Health, and he decided to put together a man-maker circuit that will leave you gasping for air on the floor!

That being said: he’s used to circuit training, and his shredded physique comes mainly from this style.  We saw our Tom Hopper Workout Routine and Diet Plan and it consisted of CrossFit styled training, which makes sense as to why he’s able to crush such a high volume, intense circuit at home like it’s nothing.

So beware, but if you’re looking for a challenge, then this is a good place to get it!

You can check out the Tom Hopper Home Circuit Workout here.

Here’s a workout you guys are definitely familiar with.

This workout routine has had multiple iterations and even shows up within our Superhuman System’s Benchmark Hero Workouts as a point of reference for people to see how they fair.

That being said: it was time we rehashed it and updated the article for you guys to make it stand in with the rest of these awesome workout routines.

For the simple fact that this one is an oldie but a goodie being re-shared it comes in at Number 10, but I challenge you to give it a shot!

You can check out the newly formatted 300 Movie Circuit Workout here.