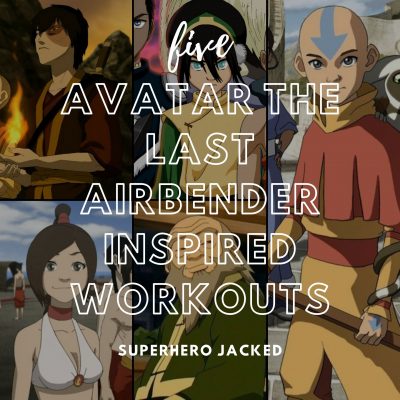 Avatar The Last Airbender workouts have been extremely popular among our character routines.

And now it’s time to make it nice and easy for our SHJ Army to find all of our current workouts!

We have our Workout Database quickly reaching 1,000 workout routines, so I’m constantly looking for new ways to expand on the different databases and listicles.

In the last few months we’ve learned that Anime Workout Routines are among the most popular routines on the entire site, and while Avatar isn’t exactly considered an anime, it seems to be that they fall into the same category for our fanbase.

For this one we’re going to be basing our character list on the entire Avatar world, which means The Legend of Korra is included!

These workouts were built around the requests among members after we initially got our Aang and Korra inspired workouts (spoiler alter; they’ll be the first two on this list), and I’ve had a ton of fun building it out.

I’m sure we’ll have a handful of other Avatar inspired workouts land on the site over time, but with the increased popularity in our current routines, and the fact that I’m currently working towards adding new anime shows and worlds to the site, I thought it was a perfect time to do a bit of a roundup.

There’s not specific order to the list below – although I did go in a male-female-male-female order for us – I just simply prefer certain routines I built to others and made the order based around popularity, effectiveness and my own bias.

We’ll start with the most obvious workout routines from Avatar’s world.

Our Aang Inspired Workout Routine was the first to land on SHJ and THOUSANDS of members of The SHJ Army flooded to take the challenge.

It’s a great calisthenics workout and I made sure to make it easily scalable with help from our Ultimate Calisthenics Workout and Guide and the tips that are provided there.

If you’re looking to step it up a notch and train like Aang, this routine is perfect for beginner to advanced members alike.

You can check out the Aang Inspired Workout here.

Next up is Korra!

Many of our members know I like to try to get both a male and female character up during the same week when I’m introducing a new show/world (and even in general).

That being said, I also like to sometimes make them fairly similar with just a slight twist in the female workout for specific body-parts they should work on a bit more (and some less).

That’s what you get with Aang and Korra’s workout routines.

They’re very similar, but Korra’s is built specifically for females that are looking to slim down and get toned, but also curvy in the right areas at the same time.

You can check out the Korra Inspired Workout here.

Now it’s time for a twist!

Normally I wouldn’t put Uncle Iroh next, BUT, this is a special workout routine.

Our Avatar Inspired Workouts are almost all calisthenics based routines, but this one is unique in the sense that I built it around a very specific moment in the show.

Uncle Iroh is shown training in prison and being JACKED, and this moment was the specific one requested among members, so I did just that.

You can check out the Uncle Iroh Inspired Workout here.

Next up is the acrobat Ty Lee!

As you would expect from the rest of the list, and any knowledge you have of Ty Lee in the show, this is also a calisthenics workout.

This one switches it up a bit and focuses more on the fact that she’s an extremely agile acrobat, but also keeps in mind that there will be a beginner audience looking to break into this style of training.

That being said, it’s definitely capable of being scaled both down and up!

You can check out the Ty Lee Inspired Workout here.

Number five is another member of The Fire Nation!

That makes THREE Fire Nation members on this list with Zuko, Iroh and Ty Lee.

Ironically enough, Zuko is coming in as the last one on the list, but definitely not because his workout isn’t as effective, and more-so simply because the two above we extremely unique in the background we were able to build them around.

Zuko’s training revolves around calisthenics, endurance, and even high intensity circuit training to get you on his level!

You can check out the Zuko Inspired Workout here.

You had to know a bonus was coming, right?

If you’re a member of The SHJ Army you know I’m always trying to throw in bonus workouts with our listicles [if possible], and this one is perfect.

Toph Beifong not only brings earthbending to this list, but she also makes our male to female ratio perfectly even among our Avatar Inspired Workouts.

Toph Beifong is one of the most powerful earthbenders of her time, so I did my best to emulate that within her routine.

We step it up to another level, but again keep it possible for all beginners to jump in and scale if needed!

You can check out the Toph Beifong Inspired Workout here.