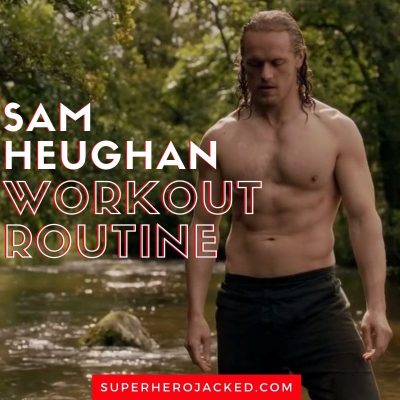 Heughan is not only a star of Outlander, but he also appeared in Bloodshot with Vin Diesel, adding the superhero movie genre to his growing list of roles.

While I wasn’t the biggest fan of Bloodshot, I can respect Heughan’s role and the fact that he got shredded to play Jimmy Dalton.

Heughan has also now started some other ventures including his own line of whiskey, but he also has a lot going on in the fitness industry since beginning his initial training.

So I’m excited to get into this one and see where it takes us.

Sam Heughan falls in right at the average height among male celebrities that we’ve seen here at SHJ.

His height was listed between 6’2 and 6’3, but his weight at 193 may be a little higher than what he walks around with at a shredded build. 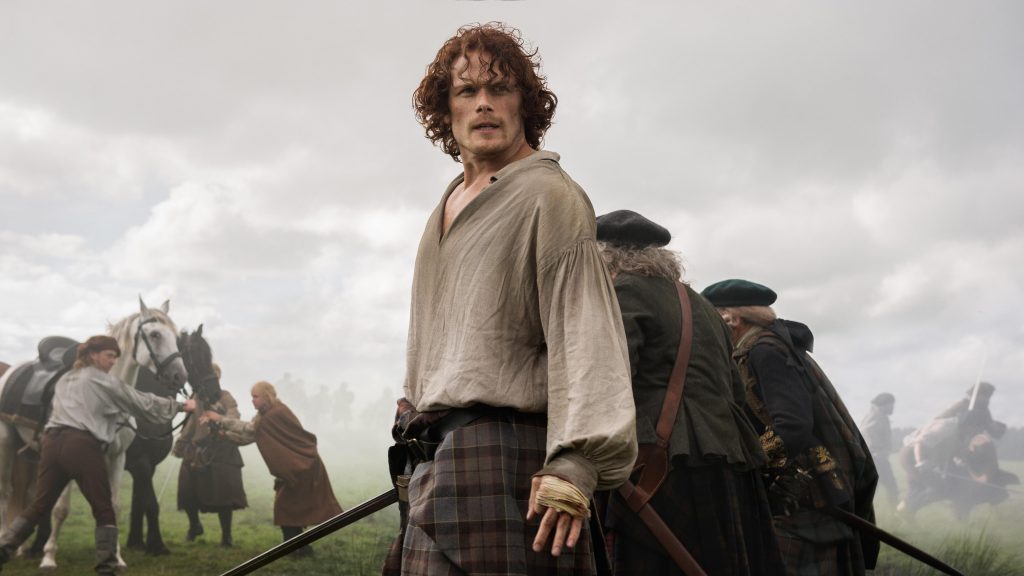 I mentioned Heughan has his own whiskey that he has started, so that should immediately tell you that he is a fan of including indulgences.

Recently we’ve been including celebrities favorite cheat meals on the site to put some emphasis on that side of things as well.

Indulgences and cheat meals incorporated into nutrition is huge among celebrities, athletes and the world’s top performers and we see it mentioned more and more.

That’s one of the reasons we have them built into our own SHJ Nutrition System here at SHJ (on a daily basis).

Here’s a snipper from SportsRec they pieced together from an interview with Glamour and Heughan:

The 6’3″ Scotsman maintains that he loves his whisky and “bad Scottish foods,” but that he follows a strictly regimented diet and fitness plan. While he appears to have no lack of confidence with spending much of his on-screen time walking around in next to nothing, Heughan admits he’s not overflowing with self-esteem. “All actors are insecure,” he confessed to Glamour. “And I’ve got my insecurities, which is why I go to the gym all the time.”

The fact that he makes mention to “bad Scottish foods” makes me assume the word “bad” is implying that they’re not exactly healthy options.

That being said, if he says it that way, he’s also likely implying that he only gets to the whisky and “bad Scottish food” on an occasional basis; and in that sense keeps it in moderation around the hard work he puts into his training and the rest of his nutrition (which seems to be pretty clean and health-first).

In an interview with Men’s Health (which we’ll see more from below), Heughan also mentioned:

“During shooting my weight did vary a little, because it is quite difficult when you are on location, and good nutrition can be hard to find. I started taking supplements, and I started eating protein bars as they were easy to carry around. In the last few months I went Paleo, as my character Jamie gets captured and he is in prison for a short while. I wanted to lean out a bit more, and I did find that that did help, though it was quite difficult at first to get into that regime.”

So he has included supplements, high protein, and even tried to tack on some Paleo dieting techniques during his transformation!

For example: Dwayne Johnson and Kevin Hart incorporate 80/20 dieting with big weekly cheat meals, Hugh Jackman, Benedict Cumberbatch, Tom Hopper, and Terry Crews utilize intermittent fasting (something I use daily as well), Mustafa Shakir and Madelaine Petsch are vegans, Brandon Routh and Frank Grillo opt for paleo, and tons of others utilize their own variations as well. 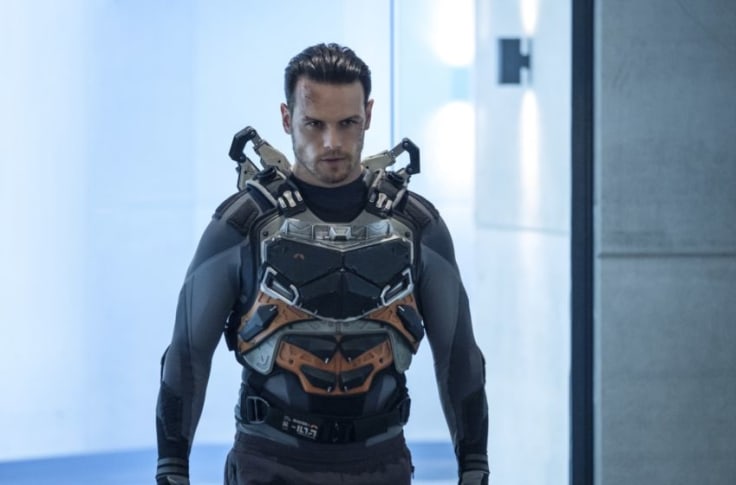 This is where the real good details about Sam Heughan’s routine really start to shine.

Heughan has taken his healthy lifestyle and even started a fitness fundraiser around it, that has done some pretty amazing things.

He talks about it a bit in an interview with Elle Magazine here:

Elle: Obviously Sam, you’re very into fitness and exercise. What drives you to be so dedicated?

Sam Heughan: Probably guilt isn’t it? Probably controlling. I don’t know, I enjoy it certainly, and Outlander has given me the opportunity to sort of have that interaction with people and share my love of what I’m interested in. We have such responsive fans that I got the opportunity to create my own healthy lifestyle and charity fundraiser. I enjoy this and try to share it with other people.

Caitriona Balfe: I think it’s a real release for you and something you love doing.

S: I love challenges, I love goals and picking a goal and working at it, which is true for most aspects of my life. But it’s about having a structure in this industry. For me, if you’re not working on who you are, you have something to work on outside of it.

Luckily for us, Heughan has done a lot of other interviews about his workout routine, so we have a bunch to go on.

Here’s a big snippet from an article in Men’s Journal, which they pieced together from an interview with Heughan and Men’s Health:

While the 6’3” Heughan was no weakling, he did have to hit the gym to get into Highland warrior shape. “Before I got the job I was probably around 82-84 kg (180-185 pounds). I was doing a lot of running; I ran for a charity team and did a lot of marathon running, but I had to look a bit bigger and I needed to look like someone who could take care of himself. He (Jamie) is an outdoors man and a warrior, so I had six weeks in London with a trainer at a CrossFit gym and we started learning the necessary deadlifts and Olympic lifts and then did a lot of conditioning work. Throughout the year I built up my way to 92-94 kgs (202-207 pounds) and really saw my lifts get a lot stronger.” (Heughan’s personal best deadlift is 180kg [396.8 pounds] and he is aiming for 200kg [440.9 pounds] by June.)

While Heughan was in boot camp-mode and training two or three times a day, he was “eating everything,” but he tried to keep his diet as clean as possible with sweet potatoes, chicken, and peanut butter as staples to fuel his muscle growth. Once he got on set, he had to adapt accordingly. “During shooting my weight did vary a little, because it is quite difficult when you are on location, and good nutrition can be hard to find. I started taking supplements, and I started eating protein bars as they were easy to carry around. In the last few months I went Paleo, as my character Jamie gets captured and he is in prison for a short while. I wanted to lean out a bit more, and I did find that that did help, though it was quite difficult at first to get into that regime.”

CrossFit style training is something that seems to have stayed popular among Heughan’s training style as I continued to dig into more interviews and his social media, but he also switches it up as well.

He loves his heavy lifting, but he also started as a runner!  So both of those things work well with CrossFit, but he does bring them into the training style more and more in different moments.

Though Heughan got fond of lifting heavy things up and putting them down to brawn up for the role, he had to shed that mass to play a role of a writer in the independent move When the Starlight Ends, which he shot in Los Angeles over the past few months. During that shoot, the 34-year-old decided to get back to running. A veteran of several half and full marathons (he ran a 1:24 personal best in the London half marathon and a 3:20 PB in the Paris marathon – he also trained to run a three-hour marathon in the 2012 New York marathon, but that race was canceled because of Hurricane Sandy) he trained for six weeks before competing in the Los Angeles marathon, clocking in at 3:36. When it comes to running, he has some very simple advice: “I was doing it more for the enjoyment of the experience, and I think that is the advice I would have. When you are running it, enjoy the whole experience and you will find that you will probably run faster.”

So we’re definitely going to want to add some running to the list of training we’d be doing to train like Heughan!

BUT, for this one we actually have a full bodyweight routine Heughan shared with Men’s Journal in a separate interview to help everyone out who is stuck at home.

So while you may want to check out some of our other celebrity workouts that revolve around CrossFit style training or even endurance work (which I add to resources on a ton of our workouts), we will have a “4-Step Bodyweight Workout” from Heughan to work with.

Men’s Journal tells us that this workout was created by Heughan’s trainer John Valbonesi for his role in The Spy Who Dumped Me and focuses in on mobility, high intensity portions and even strength building.

One Day of Training

I am going to be adding some bonus resources below that will also help you train like Sam Heughan based on the research above, but the 4-Step-Bodyweight Workout is actually shared directly from his trainer John Valbonesi (as mentioned above) with Men’s Journal!

Knees Side to Side

Do each movement for 30 seconds and then move into the next for a total of 60 seconds.  Repeat this two more times per set of exercises.

Push Up and Broad Jump

The Best HIIT Workouts to Add to your Workout