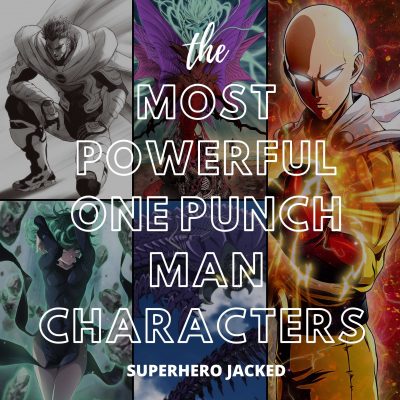 One Punch Man is one of the most popular anime on the planet right now (I know I’ll get flack for that from our Naruto fans – but hey, I did say “one of”).

It follows the adventures of Saitama, a regular guy who by his own definition is just “a hero for fun”. While he doesn’t have any laser eyes or a special utility belt, in his world, he has no equal when it comes to physical strength, speed, and endurance. Despite his insistence that he isn’t a hero, he seems to be the deciding factor for victory when lesser heroes engage in battle against attacking monsters.

Saitama is also a loner, so it is ironic that across the show, he somehow gains the admiration of other higher ranked heroes who are amazed that he is such a lowly ranked hero despite his peak physical abilities.

This list was actually easier to list than others because, in the show, you clearly see that the more powerful characters often get the spotlight when it comes to screen time. Many of the other heroes and villains on the show are merely a preview of the main bad guy to come in the episode. In that sense, while One Punch Man is a very action-packed series, it can be said that it’s a bit on the predictable side.

The characters on the top ten deserve their slot, but the gap between their individual power levels is just so far apart that, you can’t help but think if there ever will be a more suitable replacement. While there are tons of heroes on the show from ninjas and samurais to cyborgs and magicians, it’s worth noting that the hero organization is extremely organized – grouping these heroes into clearly defined categories – which absolutely helps us in making this list.

THE MOST POWERFUL ONE PUNCH MAN CHARACTERS OF ALL TIME

Technically Genos isn’t the start of our list, but rather an honorable mention that is going to kickstart the awesomeness into our actual top ten.

Genos was originally going to make our list as one of our runner ups to the most powerful One Punch Man characters of all time – but seeing as he’s also our deuteragonist and therefore also one of the most popular characters in the entire anime, we decided to highlight him early for you guys.

It also helps that he is one of our characters, like Saitama, Garou and Tatsumaki that we already have a workout built off of!

He tried to convince some of the contenders to become monsters. Some of these heroes do take him up on his offer, but are easily defeated by the reigning champion of the tournament, Suiryu. When Suiryu declines Gouketsu’s offer to become a monster, he is unceremoniously beaten to a pulp – until Saitama comes in and punches Gouketsu and completely destroys him with a single blow.

Coming in at number nine on the list of the Most Powerful One Punch Man Characters is the Dragon Class monster – Elder Centipede!

Elder Centipede is one of the most powerful beings the Monster Association has, as not only does he have an extremely tough skeleton, but he has unparalleled regeneration abilities. When a hero disintegrates or breaks through the outer shell, the inner shell simply takes its place and forms a tougher armor. It takes the combined might of Silver Fang, Bang, and Genos throwing all their ultimate moves to even pierce its tough skin. Despite all that power, it barely fazes the creature and it is only by King and Saitama’s timely arrival that it is defeated.

In our eight spot on this list of Most Powerful One Punch Man Characters is the armored hero, Metal Knight. Despite his name and appearance, Metal Knight is actually a human. Shocker! His real name is Bofoi. He appears during the incident when a giant meteor is about to fall on City Z.  Genos asks him for assistance, but Bofoi simply tells him that he is only there to test out his new weapons, and that he’s actually a safely fair distance away. Metal Knight nonetheless fires a volley of missiles at the meteor, but it barely makes a dent. As per usual, it takes the efforts of Saitama to reduce the giant meteor to tiny meteorites.

Next up among our Most Powerful One Punch Man Characters is Orochi and Psykos. These two beings by themselves are already considered a Dragon class threat by the Hero Association. However, when they combine, they form an even more formidable creature of destruction. In their combined form, even Tatsumaki aka Terrible Tornado, the most powerful psychic and #2 among the S-Class heroes, has trouble dealing with them and is overpowered.

Just missing the top five and coming in at number six among the Most Powerful One Punch Man Characters is Flashy Flash.

Much like Speed o Sound Sonic, he is a ninja and is highly trained in martial arts, specifically the use of the sword. He is currently ranked #13 among the S-Class heroes. He cares little for popularity, but instead places stock in the strength of the individual. When he enters combat, he is confident enough to say to lesser heroes that they should leave instead of causing more collateral damage. He appears very briefly in the anime, mistaking Saitama for a monster, but later recognizes Saitama’s skills as a fighter and as a hero.

Coming in at fifth place on the list of Most Powerful One Punch Man Characters is Garou. Garou is a martial arts who is part-human and part-monster. He gained his martial skills from Silver Fang himself. However, he was never satisfied with just being the best martial arts student. He wanted to become the strongest being there is. Unlike Saitama who sees being a hero as a hobby, Garou actively seeks out strong opponents to test his strength and to beat more heroes to become the ultimate fighter. Unfortunately, his encounters with Saitama have never turned out well for him. A light tap from Saitama made him faint and wake up several days later with no memory of what caused him to lose consciousness.

At number four among the Most Powerful One Punch Man Characters of all time we go out into space once more and go up in the ranks of monsters to their leader – Lord Boros!

Lord Boros came to Earth to enslave it and make it a feeding ground for his legions of monsters. However, that plan was stopped when Saitama jumped up to their ship and started destroying it and defeating his many minions. After his generals had been defeated by Saitama and the rest of the heroes of the Hero Association, Boros stepped in and took it upon himself to personally fight Saitama.

The battle raged across the ship, and each one landed devastating blows on the other. Only Boros has the privilege of saying he exchanged blows with the hero, as every opponent he’s come up with had been dealt with a single punch. Boros is the only one whom Saitama had to really push to unleash his full power as Boros had several abilities that kept Saitama in check – such as enhanced strength, speed, and a healing factor.

Coming in and making the top three among the Most Powerful One Punch Man Characters of all time is our third S-Class hero – and #2 in the ranking – Tatsumaki aka Terrible Tornado. Tatsumaki is a psychic, the most powerful psychic in the world of One Punch Man. She also happens to be the sister of Fubuki, another hero but in the lower B-Class. She is one of the Hero Association’s strongest heroes in their roster.

Coming in at number two among the Most Powerful One Punch Man characters of all time is the hero Blast! According to his wiki page – “Blast is the S-Class Rank 1 professional hero of the Hero Association. Without the knowledge of Saitama’s strength, he is largely suggested to be the Hero Association’s most powerful hero.”

Blast is much like Saitama in the sense that he also sees his hero work as a hobby, and actually spends most of his time collecting mysteriuos cubes. He has an easy-going personality and like Saitama, only gets serious when fighting against monsters.

Coming in at number one among the Most Powerful One Punch Man Characters of all time is Saitama himself!

Saitama was just a regular guy who just so happened to come across a monster trying to eat a child, and rushed to help. In the process, he got beat to a pulp. From then on, he decided to get stronger and not be a weakling unable to save others. He had no special powers except for his determination and his tenacity. Because of his will, he was able to continually do his strict training regimen day in and day out for a year.

After a year’s time of doing 100 pushups, 100 sit ups, 100 crunches, and an 6-mile run daily, he found that his strength, speed, and stamina had increased to such as high level that he could easily defeat any opponent with one punch. He simply became too powerful – and as a result- has become disinterested in hero work and views it as his “hobby”.

It’s safe to say that as the show’s protagonist – Saitama is the strongest hero there is.

The Most Powerful One Punch Man Characters of All Time (Runner Ups):