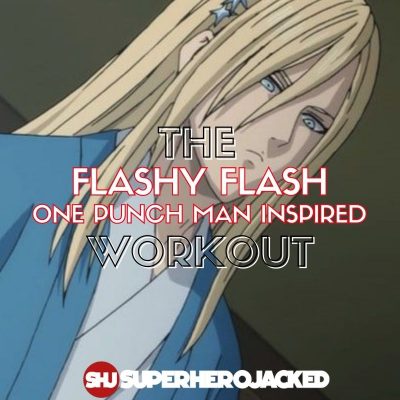 First, this week, we saw King, The Strongest Man on Earth in The One Punch Man Universe, and now it’s time to bring in a speedster.

He’s basically a pretty big deal in the OPM universe…

He will also make for a great addition to switch it up for you guys on our One Punch Man Workout Placement Quiz considering a speedster definitely never hurts when we’re looking to unlock our inner superhuman.

Oh, and the fact that Flashy Flash is absolutely shredded is just another bonus when building a routine around him.

Flashy Flash is actually quite short if compared to an average male height we’ve seen overall at SHJ.

But his 5’7 is slightly above average if only compared to anime characters who don’t fall into that behemoth category we’ve seen. 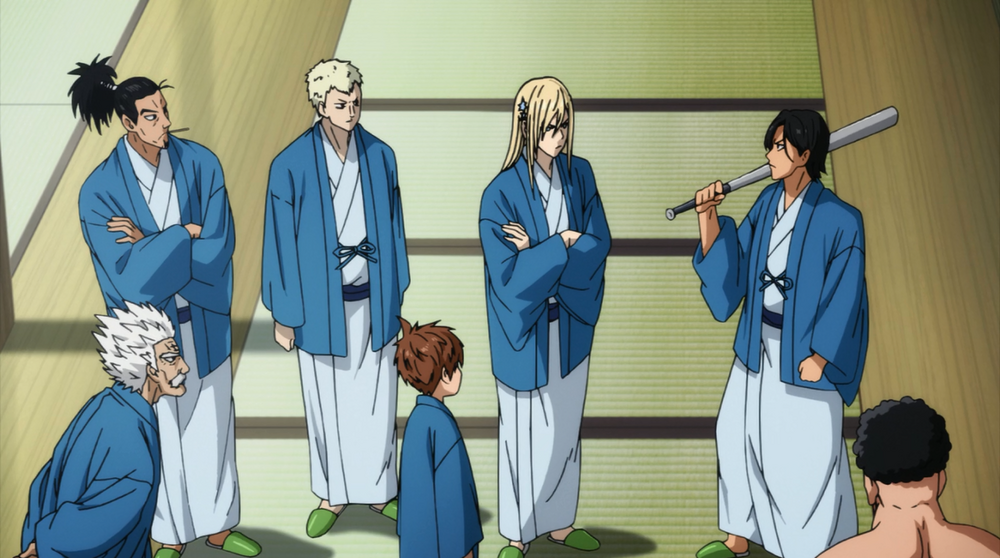 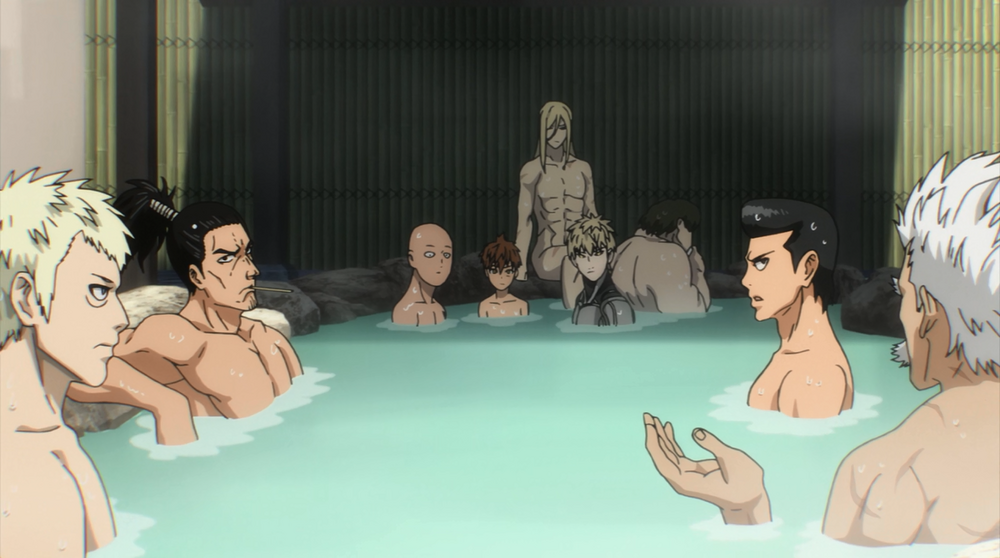 Kickstarting our research into Flashy Flash we will be pulling right from his Wiki Fandom page, which leads us off with a brief bio section:

Flashy Flash is the S-Class Rank 13 professional hero of the Hero Association. He is a former member of the Ninja Village’s 44th Graduation Class, nicknamed “The End.”

He is also one of the few people aware of Saitama’s power.

Flashy Flash is extremely powerful, and when we make our way into the full breakdown of his powers and abilities we begin to learn.

As an S-Class hero, Flashy Flash is very powerful. In terms of speed, he is arguably the fastest S-Class hero in the association, though he seems to be inferior to the top-ranked S-Class hero Blast. He is the former top ninja of the 44th graduating class of the village that Speed-o’-Sound Sonic hails from. Flashy Flash is also one of the few S-Class heroes capable of defeating multiple Dragon-level monsters singlehandedly, as he was able to kill Hellfire Flame and Gale Wind, two powerful Dragon-level threats known for their remarkable speed without sustaining any significant damage or visible fatigue, although he needed to use his finishing move to eliminate them. According to Darkshine, if Garou were to fight him, the latter would most likely die before being able to show any of his techniques.

Flashy Flash is also a very analytical fighter. He strategically waited for the right moment to incapacitate Gale Wind and Hellfire Flame simultaneously to prevent either from escaping, reasoning that the other heroes would have trouble with the ninjas’ speed. He was also able to discern Saitama’s physical attributes by analyzing the sound of his footsteps.

And when they break down each individual ability here’s what they give us:

Immense Speed and Reflexes: Flashy Flash possesses incredible amount speed and reflexes, surpassing most other characters. He is said to achieve victory at the speed of light. His speed leaves powerful shock waves in his wake. He was able to travel to Hundred-Eyes Octopus, a Demon-level Mysterious Being, and slash the monster’s eyes in the blink of an eye. During the initial attack against the Monster Association, Flashy Flash dispatched some monsters so quickly that Shadow Ring, a fellow ninja, could not see what happened. He was able to effortlessly keep up with two Demon-level monsters known for having remarkable speed, Hellfire Flame and Gale Wind in their human forms, only taking some pressure when they transformed into their monster forms and was able to kick them at speeds they were unable to counter. After having stunned Gale Wind and Hellfire Flame with a barrage of fast kicks, he managed to cross a great distance and perform one of his ultimate techniques, Flashy Slash, slicing the two Dragon-level monsters in half before they could even react, and his actions were so fast that they seem to happen almost at the same time. Flashy Flash’s speed was also remarkable enough to impress Saitama, with the bald hero stating he was “kinda fast”.

Immense Strength: Flashy was shown to be strong enough to combat and kill two Dragon-level threats simultaneously. He can deliver powerful kicks that can stun Dragon-level monsters. He can also easily cut massive pieces of stone and create giant explosions throughout his fighting. Additionally, the large crevice where he was battling Gale Wind and Hellfire Flame was completely destroyed as a result.

Immense Durability: Flashy Flash is shown to be quite resilient. He was able to sustain numerous direct hits from two powerful Dragon-level monsters Gale Wind and Hellfire Flame at once without any serious damage, only coughing up small traces of blood.

So, if you didn’t notice, we’re going to be focusing in on Flashy Flash’s speed and strength.

For that reason we will be building this one around some advanced calisthenics progression on top of some overall endurance and speed work.

So expect some high volume, a lot of running, and even a mix of what we’ll be seeing from our 90 Day Unlimited Stamina System in the future here at SHJ.

For this one we’re still going to be having some calisthenics training, but for the most part we’ll be focusing in on endurance work that will build up to longer runs and speedier (quicker) times. For this we’ll used some distance runs, timed runs, and circuits to get a full speedster regime.

Complete the Following Distances FOR TIME!

(Measure Your Time and Complete it For Speed, Looking to Improve Over Time)

Note that while these distances might seem daunting, it is okay to start by running and walking on and off to work your way up to a better score.

Break, run, break, run, and then the next time go out there and break a bit less! 🙂

Complete the Following at Easy to Moderate Pace:

Your recovery run revolves around getting out there and moving for the time listed.

You may be able to get out for a walk/run for 30-60 minutes as a beginner/intermediate if you plan on walking/speed walking for the majority of the duration to allow for more recovery – so keep in mind the time listed is more time spent RUNNING.

That being said: while it’s okay to walk/speed walk, if you plan on doing it for the majority of the duration you should increase the time to 30-60 minutes at a minimum.

Side Note: A good way to measure your improvement over time during your speed circuit is to pay attention to what speed your capable of performing your sprints at and which speed your comfortable with your walks at.  Another great thing to do is measure your heart rate directly after your sprint and directly before the next sprint to see how quickly you recover and then compare that to future circuits.

Complete Each Movement for 30 Seconds

Complete the Following FOR TIME! 🙂

Similar to your long distance run training you should be looking to improve on this run each week, but also take it a bit easier than your timed distance run and don’t be afraid to scale it as needed going into the circuit – especially if you’re choosing one with running.

Your schedule does not need to adhere to this exact daily structure BUT you should have a rest day prior to your distance run day each week, as this will be an extremely important marker for your improvement and how well you are completing it over time! 🙂

Rest days are mandatory, BUT it’s okay to get active as long as you’re allowing your body to recover.