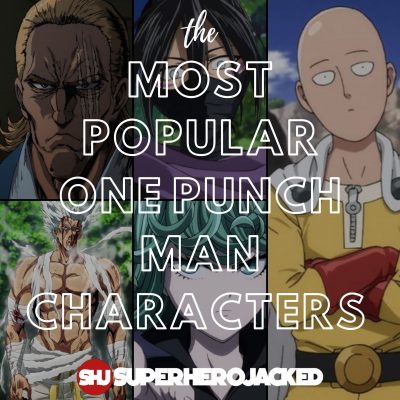 Since we released The Most Powerful One Punch Man Characters list last week, this list was a lot easier to make because of the former’s existence. Nevertheless, I had to do a bit of research on which characters would actually make this list because as One Punch Man is one of Shonen Jump’s most popular manga, there’s so many fan-favorite characters to choose from – both hero and monster alike.

The characters on the top ten deserve their slot, but the most consensus I’ve gotten were the top 3 slots. The other lists I was able to research listed other characters in their top 10 slots.

This being a popularity contest in the sense of the number of fans who like each individual character, it’s easy to get caught up in a debate on which character deserves to rank higher or lower on the list. Fans are fickle that way (but we’re all human).

We have our One Punch Man Inspired Workouts in a mini-database within our larger Anime Workouts Database like we’ve now been able to do for a handful of the most popular shows.

For this one I scoured the internet for help and almost every single listicle has a different take on who The Most Popular One Punch Man Characters are so what I decided to do was compile ALL of them together and place each character in the slot they averaged most.

THE MOST POPULAR ONE PUNCH MAN CHARACTERS

Starting off our list of The Most Popular One Punch Characters of All Time we have the protector of Q-City, Watchdog Man!

Watchdog Man may seem like just a weirdo dressed up as a dog, but don’t let that fool you. He’s a powerful hero who’s risen to the ranks of the S-Class heroes and is currently ranked #12. His speed, strength, and reflexes are so strong that even Garou had a tough time fighting him. I feel that his appeal to fans is the fact that he does his hero work dressed as a shiba inu, much like the dog Hachi.

Do you agree with Watchdog Man’s placement in the top ten or would you push him down to the honorable mentions and bring someone else up into his slot?

Coming in at number fourteen on the list of the most popular One Punch Man characters of all time is Flashy Flash!

Yes, I know his name is an alliteration. But don’t be fooled and don’t blink or else you might not see him pass by. Flashy Flash is a samurai hero who prefers to deal with monsters with his speed and his blade. He is much like Speed of Sound Sonic, who is a shinobi, in this regard. The only difference is that Sonic is out to simply fight the strongest heroes and win, whereas Flashy Flash fights to protect innocents. Flashy Flash is popular because of his skills, and his appealing looks.

At number thirteen on the list of The Most Popular One Punch Man Characters of All Time is Saitama’s self-declared rival, Speed O Sound Sonic. Sonic is a shinobi who trained for years and is one of the fastest characters in the series. He is popular for always trying to beat Saitama in a fight, and repeatedly losing to the latter. There is something admirable about his persistence, however.

Next up among our most popular One Punch Man characters of all time is Lord Boros!

Lord Boros is the first main villain to give Saitama a run for his money. Both fighters seem to be matched in terms of power and reflexes. Boros gave Saitama a fight that ignited his passion to fight again. Despite Saitama’s powerful blows, Boros was able to regenerate quickly and keep up his onslaught of hits. There was seemingly no end to their fight until Saitama got serious and unleashed his ultimate move against him. For that feat alone, Boros is popular with the fans of the anime.

Fubuki aka Hellish Blizzard is the sister of Terrible Tornado. Like her sister, she is a telekinetic able to move objects with her mind. She tries to recruit Saitama to join her club of B-heroes and rise through the hero ranks. However, after a scuffle after Saitama refused her offer, she realizes that he is much more powerful than his current rank suggests. She later becomes in awe that Saitama knows King, an S-Class Hero.

Making it to the Top 10 is Black Sperm, one of the Monster Association’s executive monsters (another way of saying super powerful even among monsters). He is considered a Dragon Class threat. He is strong enough that even an S-Class hero like Atomic Samurai had trouble when fighting him.

At number nine among our list of most popular One Punch Man characters is Silver Fang aka Bang – one of the most skilled martial artists in the One Punch Man universe. He trained Garou, another martial artist, and is the creator of the martial arts style Water Stream Rock Smashing Fist.

Mumen Rider is just a regular human on a bike. And that’s what makes him so likeable. He knows that he doesn’t have any powers or special abilities like the other higher-ranked heroes, but he still does his best to protect the average citizen from monsters and other threats at the risk of his own life.

When the Sea King attacked a refuge center, Mumen Rider distracted him long enough for Saitama to regain consciousness and re-enter the fight. Despite severe injuries and many broken bones, Mumen Rider stood up to the monster, knowing that he couldn’t beat him.

Coming in at number 7 among the most popular One Punch Man Characters is the protege of Saitama, the Demon Cyborg, Genos! Genos has been modified many times and become more cyborg than human. Nonetheless, all his enhancements still pale in comparison to the destructive force that Saitama possesses. Many find is very interesting that such a highly ranked hero would “slum it out” with a B-Class hero like Saitama. Regardless, Genos defends Saitama’s skills and remains fiercely loyal to his Master.

At number six in our most popular One Punch Man characters is Metal Bat aka Bad. He is a hero that uses his steel bat to dispense justice and protect those who aren’t strong enough to defend themselves. While he is known for beating his opponents senseless, he does have a softer side and is particularly protective and completely different around his younger sister, Zenko.

Making it to our Top 5 in our list of most popular One Punch Man characters is the man who can’t die – literally. Zombieman has the ability to regenerate any part of his body and can seemingly get back up to fight even after being “killed” by his opponents. He is one of the few people aware of Saitama’s true power and aims to become like him.

At number four among the most popular One Punch Man characters of all time we have the sister of Fubuki, Tatsumaki aka Terrible Tornado!

While both heroes possess psionic capabilities, Tatsumaki’s power far exceeds her sister’s and is therefore ranked higher in the Hero Association’s roster of heroes. Tatsumaki is #2 in the S-Class ranked heroes and is one of the few heroes who recognizes Saitama’s strength. She’s popular because of her signature green hair and her stare which suggests that other heroes are just beneath her.

Coming in at number three in our list of most popular One Punch Man characters of all time, we have the hero ranked 7th among the S-Class – King. Known by the populace as being the “Strongest Man on Earth”, King actually takes no pleasure in being thought of as a hero.

In reality, he’s just a regular guy who happens to be in the wrong place at the wrong time whenever monsters and heroes are fighting. What people know as his “King Engine” is actually his heart that beats furiously fast when he is extremely nervous. The fact that people perceive him as anything but weak is an interesting plot twist in the anime.

Coming in at number two among the most popular One Punch Man characters of all time (and also listed as number five among the most powerful) is Garou – Silver Fan’s former student and a human-monster hybrid.

The most significant distinction between Saitama and Garou is their motivation for fighting. While Saitama fights to protect others, Garou fights to show his strength is more superior to that of others. Garou is constantly on the lookout for strong heroes to fight, and takes great pleasure in proving that his fighting skills and abilities are a match for none of his opponents – save for Saitama.

Coming in at number one among the most popular One Punch Man characters of all time is the main character of the series – Saitama!

Honestly, are any of us surprised he made the top of this list? Without him, there is no show. There are no epic fights. What makes Saitama so popular is that he is just so overpowered without even having any special powers. He got to be the strongest by following a simple training routine – one that we can all implement in our own daily lives. If you want to check it out, click the link below.

Let me just say it here – Saitama is the strongest human in his universe.

The Most Powerful One Punch Man Characters of All Time (Runner Ups):