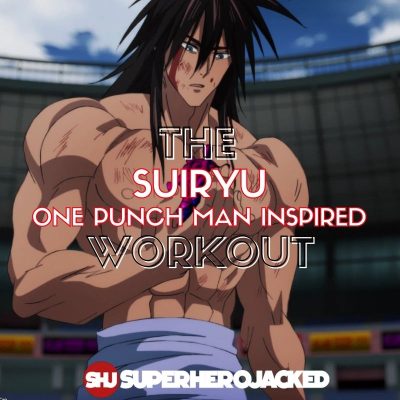 It’s a One Punch Man week this week after getting a couple new workouts in our One Punch Man Inspired Workout Database last week as well.

And who better to join us than the SHREDDED martial artist: Suiryu.

I suppose that’s a matter of opinion, but in MY opinion I think Suiryu is a great addition to our Anime Workouts Database and will be awesome for our Workout Placement Quizzes as well.

We’ve had a lot of martial artists and ninjas among our characters, but Suiryu is JACKED and will be a lot of fun to switch it up and build around both aspects.

Suiryu comes in pretty tall compared to a lot of our male anime characters, actually.

Although he obviously doesn’t compare to some of the random behemoths in there. 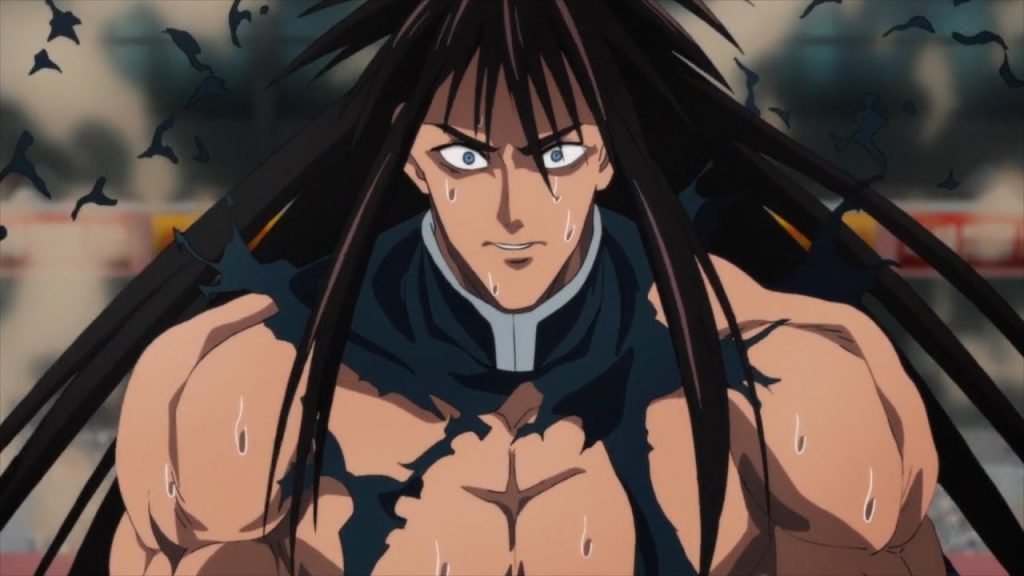 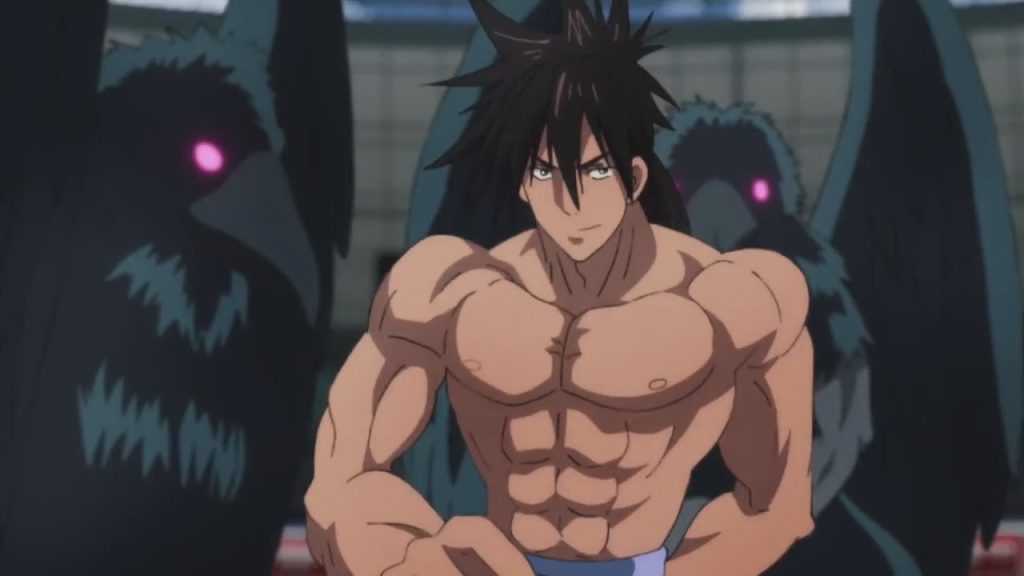 To learn more about Suiryu and his abilities, which we’ll use to build this one out, we’ll be pulling right from his Wiki Fandom page.

Here’s how they lead us off:

Suiryu is a martial artist and user of the Void Fist. He was a top contender in the 22nd Super Fight and a five-time champion of the tournament. He is also one of the few people aware of Saitama’s true strength.

We can skip his physical appearance section, as we obviously know what we’re working with there, and then move onto his powers and abilities.

They give us a LONG section describing his overall power level before breaking down specific individually:

Suiryu is a martial arts prodigy. Despite having spent most of his time goofing off or not taking his lessons seriously, he still ultimately became one of the most revered martial artists in the world, considered a legend for winning four Super Fight tournaments in a row. He defeated two A-Class heroes with one kick each and reached the finals of the tournament with little effort. During his fight with Saitama, he was able to display strength and fighting abilities on par with S-Class heroes, able to make Saitama put a little effort into not being eliminated. Bakuzan stated that if he is able to kill Suiryu, that would make him the strongest. Suiryu considers “Wolfman” a worthy opponent, and wished to fight him, and indeed when fighting Garou in a virtual martial arts battle the two proved even with one another, although Garou was unable to unleash his full power due to a system overload.  Garou was impressed enough with Suiryu that he wanted to find him after their virtual battle, although he quickly dismissed the idea. After the Super Fight tournament, Suiryu was able to fight and defeat four martial artists transformed into monsters of Tiger, if not Demon-level might.

This display of fighting power impressed even Gouketsu, the first champion of the Super Fight Tournament, who had become a Dragon-level Mysterious Being. At one point, Gouketsu offered Suiryu an executive position in the Monster Association if he chose to become a monster, implying that if he ate a monster cell, he could become an extremely powerful monster, further proving his great strength since the stronger the human the stronger the monster transformation will be. However, as a human, Suiryu is no match for the likes of Gouketsu and Saitama, who both can defeat him with ease.

From there they go on to break down each individual ability with a lot of depth.

Normally I would cut each one down a bit to save some space, but Suiryu’s ability descriptions are just too good to cut:

Immense Strength: Suiryu possesses superhuman strength, far surpassing that of average heroes. During the Super Fight Tournament, Suiryu effortlessly defeated two A-Class heroes Max and Sneck with one kick each. He easily cut the fighting ring in half with one chop and proceeded to flip up half of it with one stomp. His overwhelming strength was enough to terrify most of the audience in the tournament, including the security. He was strong enough to hold back and kick Choze’s energy orb into the sky. Suiryu was also strong enough to blow off one of The Three Crows heads with a single kick despite being in his weakened state. With his last burst of strength, he managed to break a toe of the Dragon-level monster Bakuzan. Even when he is completely drained of energy, he had enough power to crack the concrete when he smashed it with his fist. When flexing his muscles, he was able to shatter metal bars around his biceps, showing off his incredible muscle power.

Immense Speed and Reflexes: Suiryu possesses an extreme amount of speed and reflexes, being able to kick at the speed that normal humans cannot perceive.He also defeated Max, an A-Class hero, in an instant, with a single kick that the hero was unable to react, as well as being able to effortlessly dodge several strikes from and defeat another A-Class hero, Sneck, with another kick that the latter was also unable to react. Furthermore, Suiryu was fast enough to keep up with Monster Choze in their duel while the other martial artists, except Gouketsu, could not see their movements at all.

Immense Durability: Suiryu possesses a very tough body. He was able to come out of his fight with Saitama without any lasting injuries though the hero wasn’t serious at all. He didn’t sustain any visible damage on his person despite having been launched out of the fighting ring by Saitama’s hip bump that used Suiryu’s own momentum against himself even when the impact shattered part of the concrete audience stand. Suiryu was capable of stopping an attack from Choze who attempted to penetrate his body using his horns, with his muscles. Additionally, he also managed to take hits from a suppressed Gouketsu without being knocked out and even survived a barrage of punches from Monster Bakuzan despite being heavily injured.[19][20]

Immense Stamina and Endurance: Suiryu possesses great stamina and endurance as he was able to withstand a hip bump from Saitama that sent him flying into the audience and recovered in little time. Even after the fight, a short time later he is able to fight and defeat multiple martial artists who became Mysterious Beings. After defeating the transformed martial artists, he was still able to perform one of his martial arts techniques on the transformed Gouketsu. Despite being heavily injured, Suiryu remained conscious, albeit barely, after being hit by Gouketsu. His great endurance is yet again shown through the fact that he was able to withstand a heavy hit from Monster Bakuzan, despite sustaining heavy injuries from Gouketsu prior and still stay conscious.

Enhanced Senses: Suiryu was able to sense Bakuzan’s bloodlust as well as being able to sense Saitama’s strength, considering him as a worthy opponent after witnessing him defeating Zakos with one slap.

Clearly we have A LOT to work around.

We do love to make calisthenics workouts when we have martial artists and ninjas hit the site, but considering Suiryu’s abilities and overall physique we’re going to be hitting the weights.

So be ready for weightlifting, a ton of of high intensity work, and even some endurance in there.

For this one we’re going to make our strength and speed focus around a PPL Split and then another two days devoted to high intensity circuit training that will work on our endurance while also putting our muscles to work as well.  One of those days will be completely calisthenics and the other we’ll throw in some weights.