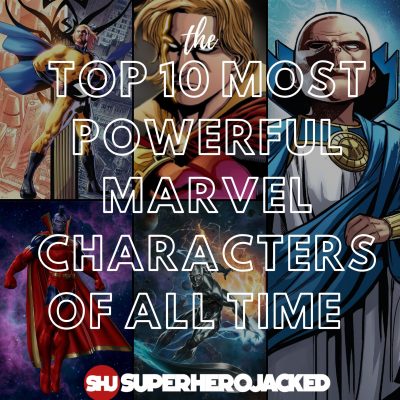 It’s difficult to rank the Top 10 Most Powerful since there are so many strong characters in the Marvel universe – both in the comics and in the big screen.

When I first started to write articles here on the site, these lists were in the forefront of my mind. I grew up reading the comic books of my uncle, and he had tons of Marvel comics (like, 10 boxes worth of adventures), which was also why I spent weekends with him and my aunt so I could read all the comics I wanted to.

The characters on the top ten deserve their slot, but the power levels are just so close together, and there’s just SO MANY powerful characters that even our runner-up section at the bottom of this article was hard to lock down.

BUT, before I rant about the power level throughout the show TOO much (might have already done that), I do want to point out that the Marvel universe is just chock-full of so many super-powered heroes and villains. It is one of the most popular brands in the entire world, and we have to thank our lucky stars that Stan Lee was alive during our time to create such as diverse and wondrous universe to explore.

We have our Marvel Inspired Workouts in a mini-database within our larger Superhero Workouts Database like we’ve now been able to do for a handful of the most popular heroes, and we also even just recently got our Marvel Superhero Workout Placement Quiz to help SHJ Army members find the best workout for them.

For this one I scoured the internet for help and almost every single listicle has a different take on who The Most Powerful Marvel Characters are so what I decided to do was compile ALL of them together and place each character in the slot they averaged most as well as keeping the list to base TEN most powerful and then increasing the length of the normal runner-up slots I normally do in no specific order.

THE MOST POWERFUL MARVEL CHARACTERS OF ALL TIME

Starting off our list of The Most Powerful Marvel Characters of All Time we have the leader of the Inhumans – Black Bolt!

I mean, can you destroy planets and moons with a single word?

Yeah, I didn’t think so. Black Bolt is an Inhuman, a group of humans that were experimented on by the Kree in the early part of the Kree-Skrull War and granted powers with the intention of having them serve as soldiers against the Skrull. However, the Kree abandoned the experiments after hearing a prophecy that one of the Inhumans would bring about the end of the Supreme Intelligence.

Black Bolt is a member of the Inhuman Royal Family with Medusa as his queen, and the other members of the Royal Family: Karnak, Lockjaw, Crystal, Triton and Gorgon. He has the ability to emit a powerful sonic blast that can destroy anything in the vicinity. Because of this, Black Bolt is supremely careful to use his voice only when he is in imminent danger, and mostly uses sign language to communicate.

Coming in at number nine on the list of the most powerful Marvel characters of all time is Gladiator!

He was born on Strontia, which is part of the Shi’ar Empire and he is the leader of their Imperial Guard. He was also a member of the Annihilators, Dark Guardians, and Guardians of the Galaxy. Gladiator is capable of immense strength. He is able to rip black holes apart, shatter planets, and stand toe-to-toe against the Phoenix Force, an Omega Level mutant. He is also capable of psionic abilities and flight. What’s interesting to note here is that he is only able to use these abilities to their fullest extent when he is confident in the purpose or goal.

At number eight among the most powerful Marvel characters of all time is The Enclave’s greatest experiment, and the bearer of the Soul Jem, Adam Warlock.

Initially meant to be The Enclave’s protector, Adam rebelled against his creators, and wandered space for a time until he met the High Evolutionary, and was asked to help him defeat the evil Man-Beast on Earth. The High Evolutionary gave Adam the Soul Jem, granting him immeasurable power and strength enough to beat Man-Beast by absorbing the souls of other beings and using their strength in battle. In the upcoming MCU movie Guardians of the Galaxy Volume 3, the character is set to make his debut being portrayed by Zac Efron (supposedly).

Sentry is Marvel’s Superman. As Superman 2.0, he has more power than he knows what to do with. Not only is he capable of incredible feats of strength, but he can also bend time, teleport, manipulate the weather, heal from practically anything, is invulnerable, and so much more.

Sentry is the hero name of Robert Reynolds. Reynolds was an addict who consumed the Golden Sentry Serum, and gained the power of a thousand suns and the abilities of a superhero. With the new powers, he debuted a hero to society, and was accepted by the public and much of the superhero community. He became friends with Reed Richards, Spider-Man, Professor X, and The Hulk.

Coming in at number six in our list of the most powerful Marvel characters of all time is the lesser known Summers brother, Gabriel Summers – known by the X-Men as Vulcan- Cyclops’ brother. Vulcan is an Omega Level mutant and is capable of several types of energy manipulation. He can manipulate his force field into different shapes and can absorb energy and redirect it towards his opponents. He is also able to withstand powerful psionic attacks and can even drain his opponents’ energy.

Making it to the top five among the most powerful Marvel characters of all time is the Allfather himself, Odin Allfather! Odin is the King of Asgard, the realm Eternal and is the father of Thor and Loki. He is a powerful warrior and the protector of the Nine Realms, including Midgard. Odin is the oldest Asgardian, and possesses the Odinforce, allowing him great strength, speed, reflexes, and regenerative powers via the Odinsleep. With the Odinforce, he is also able to sense enemies and danger from across dimensions. Because of his long years, he is a master tactician and strategist.

At number four among the most powerful Marvel characters of all time we move into a legendary mutant, Franklin Richards!

Franklin Richards is the son of Reed and Sue Richards, and like his parents possesses super powers. He is a reality warper, able to alter the reality he is living in and even change his anatomy and power output. Because of this, he has to be careful in letting his powers run wild. After the Multiversal collapse, Franklin used his powers to restore the universe.

Wendell Vaughn was a SHIELD agent, and a former member of Project PEGASUS. He was sent on a space mission to find the origin of the Quantum Bands. During his trip, he was chosen to be the new Protector of the Universe, a position previously held by Captain Marvel.

Wielding the Quantum Bands, Quasar is able to disperse his entire being into bursts of quantum energy, and is able to use the bands to generate melee weapons. He can use the bands to create anything he imagines, much like the Green Lantern Corps and their rings. He is categorized as an Alpha Plus powered being.

Born Norrin Radd on the planet Zenn-La, Norrin offered his services to Galactus as his herald in order to safeguard his planet from being consumed. Gifted with the Power Cosmic, the Silver Surfer traveled across the universe searching for suitable planets for Galactus to devour.

Because of the Power Cosmic and the use of his silver board, Silver Surfer is able of incredible feats of speed, and is able to manipulate and absorb energy, conjure force fields, and rearrange matter molecular level.

Number One: Uatu the Watcher

Coming in at number one among the most powerful Marvel characters of all time is Uatu the Watcher!

A member of the oldest beings in the universe, Uatu is a cosmic being capable of being telepathy, illusion generation, time travel, teleportation, flight, and cosmic awareness. He is a being charged with the role of observing the events that happen in the universe, but mandated never to interfere with the events.

Would you place Uatu at number one or does Silver Surfer give him a run for his money?

The Most Powerful Marvel Characters of All Time (Runner Ups):