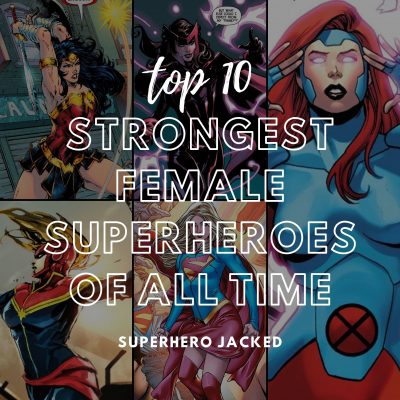 The SHJ Army loves listicles that rank popularity, power, and strength; so that’s what we’re going to give them!

This time we’re talking about The Strongest Female Superheroes of All Time.

We’ve been seeing a bunch more listicles here – and if you’re new here they’re a bit unique because you’re also going to be getting workout routines that are built around inspiration from our favorite characters – and it has been helping members find some characters they may have otherwise not noticed are waiting within our Workout Database.

To be fair, I should clear up that when I say “Strongest” I mean “Most Powerful”.

In the past we had a couple listicles talk about the strongest AND the most powerful and it split the two into different categories, but for this one they’re going to be one in the same.

Here are some other listicles we’ve seen recently that talk about the strongest, most powerful, or most popular superheroes and characters:

And the list goes on and on, but I think that should suffice to get you started in some of our awesome lists other than this one.

I should also mention how I’m building this list considering we do it a bit differently each time.

This time around I’m basing it entirely on the characters powers and abilities and using other sources and listicles to help me build this one combined with my own understanding and research of the character’s overall powers.

It’s just coming right down to their powers and overall strength!

MOST POPULAR SUPERHEROES OF ALL TIME

I am a huge fan of X-Men and Wolverine is one of my list of top 3-5 characters; therefore I LOVE Mystique.

On top of the powers listed above she is also extremely powerful with her hand to hand fighting abilities; similar to our female character who comes in at number eight on this list with NO powers at all.

I think we all love a speedster! Not only does Jesse Quick have that super-speed, but she also has increased strength.

Her Wiki Fandom explains it as such: “She possesses super-strength like her mother. As with her mother, the mechanism of this ability remains unexplained, which irritated her father.”

You HAD to knock Black Widow was making the list, right?  She made our list for the most powerful superheroes with no powers, and now she’s back on the strongest female superheroes of all time.

This may not scale in the sense of tracking her overall abilities and how powerful they are, but if we scale her in at a level of effectiveness with her powers and abilities and the amount of damage she is able to do both solo and on a team; then she definitely deserves a spot on this list.

If I didn’t make a couple swaps to the list and add to the honorable mentions and runner-ups category this list would be flooded with even more X-Men.

That being said, I’m sure you could have guessed that Storm would be on this list if you gave it a second thought.

She was even one of the four Horsemen of Apocalypse due to how strong she is, so that says something about the fact that she’s coming in at number seven on this list!

For those of you who don’t know this yet (we haven’t yet met her in the MCU): in the comics the spirit of Brunnhilde transformed Jane into Valkyrie.

Without knowing that, and without even seeing her powers, though: I’m sure you could tell that she was worthy of making this list just based on the shear fact that she’s worthy of wielding Mjolnir!

Scarlet Witch is one of the strongest characters in the MCU and she’s only coming it at number five!

After her recent portrayal in WandaVision it’s clear that she’s only becoming more and more powerful, and the MCU seems to have some big things planned for her.

That being said, this list is also built with her powers in the comics in mind, and there are a few ladies that are even stronger!

Captain Marvel is extremely powerful, and I would actually love to see her go head to head with the next character on our list!

Brie Larson has stated that she thinks Captain Marvel is the strongest member of The Avengers, and I’m actually curious to know what you guys think!  Is she more powerful than Thor? Hulk?

She’s also a character that I find very similar to Captain Marvel.  Who do you think would come out on top if they were to go head to head?

There were some lists that had Wonder Woman just making the top five, some that had her at number one, and some that just had her in the top ten.

The range of where she was listed among the strongest female superheroes of all time is actually quite surprising, but personally I think she deserves her spot in the top three.

We started with an X-Men character, had one at the middle of the pact, and now we’re finishing up with number one as the most powerful there is.

Jean Grey has the power to be an unstoppable being.  Her power is just essentially endless.

We got a chance to see it in the original X-Men movies and then again in X-Men Apocalypse, and she’s even stronger in the comics!

The Strongest Female Superheroes of All Time [Runner-Ups and Honorable Mentions]: