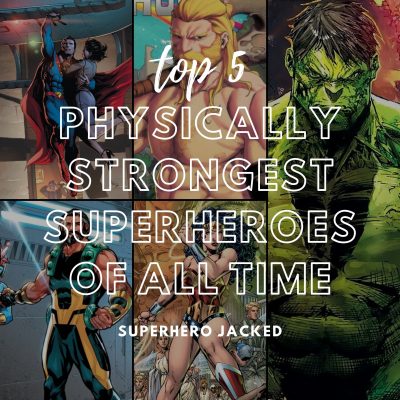 I already told you guys in our last couple listicles in this new format we’re hosting (more on that in a second) that we’ll be taking a look at the strongest superheroes of all time, and here we are.

And, to be clear, we’re specifically talking about physical strength, not overall power, although many of the heroes on this list will be found on both (and in similar placement).

These new listicles we’re hosting bring us a mix of fun, while also allowing us to share workout routines that have been inspired by characters in the past and give The SHJ Army another way to find some of these awesome character’s routines that may otherwise be hidden deep inside our Workout Database.

Our last two listicles within this new category were:

Which is why we’re now talking about the strongest superheroes of all time, but this time in regards to strength being physical strength, like the type we here at SHJ strive for within our routines.

What makes these listicles different than others we’ve seen in the past is that we’re not strictly focusing in on lists based around the workouts themselves.

For example, here’s a couple you’d likely be interested in if you’re on this one (that fit the other criteria of listicles we’ve seen):

Of course there have been so many more that you can check out in our Workout Listicles section of the blog.

Point being: we’re here to focus in on fun now as well.

And, quick spoiler alert for all our anime fans out there reading: the next few listicles of this style will be moving towards the anime side of things; I’ve just been preparing for it with the other workouts I have added to the site in the last few days/weeks.

Without further ado, the strongest (physically strong) superheroes of all time!!!

THE [PHYSICALLY] STRONGEST SUPERHEROES OF ALL TIME

Wooo! Starting off with a surprise.

As you guys may be aware: I almost always like to include a bonus or at the very least an honorable mention of some sort.

This time I’ll actually be including a sixth superhero among the strongest ever, and that is Shazam!

This is actually for a few different reasons.  One, he deserves a mention, two The SHJ Army loves both Shazam and Zachari Levi, and three it leaves us with a perfect split between Marvel and DC and I like my unison.

Don’t worry, we build it around Billy Batson after he says the word!

You can check out The Shazam Inspired Workout Routine here.

Onto number five among the strongest superheroes of all time.

I am actually way to excited to have Hercules on this list.

Personally I think the rest of the list is extremely cliché, so being able to have a character like Hercules that brings it a little flair for the people who don’t automatically see it coming is something I enjoy!

Another reason I really like the fact that Hercules is on the list is because it diversifies the characters and celebrities whose workouts we’ve seen on the site, and therefore the ones I’m able to share with you guys within these new listicles.

Although, if you want our original Dwayne Johnson Workout Routine and Diet Plan we have that too, he just happened to be super open with his Hercules training…

If we want to be really fair we also have Kellen Lutz Workout Routine and Ryan Gosling Workout Routine who have also starred as Hercules in their own variations of the hero.

Oh, and if we’re being REALLY technical we even have a Hercules Inspired Workout drawing inspiration from the Disney character as well!

You can check out The Hercules Inspired Workout Routine here.

Our one and only Wonder Woman coming in at number four for the ladies.

When I first began researching the strongest characters outside the most powerful among the superheroes I was a little worried we weren’t going to have any woman in the top 5.

But, after reading more and more it’s VERY clear Wonder Woman deserves a spot at this slot.

You can check out The Wonder Woman Inspired Workout Routine here.

But still fun nevertheless, I mean we’re right back to our God of Thunder who we love oh so much!

He came in at our number two slot among the most powerful superheroes of all time, but now he gets shot up a peg due to us specifically talking about strength and one of his team members coming in a bit higher.

That’s a good thing though as it switches us up a little bit and makes it more fun.

Plus, we still get to share all our Thor Inspired Workout, and you guys know how much we love Thor and Chris Hemsworth around here!

Yeah, I wasn’t messing around when I said that.

You can check out The Thor Inspired Workout Routine here.

Some people will argue that Superman should be at the number one slot.

Others will argue that he’s WAY too cliché to even be fairly included on this list.

No matter how you spin it not EVERYONE will be happy, but I personally think we did a great job jumping in and out of Marvel and DC quite fairly and this moves Superman down a peg from our last listicle where he came in as the most powerful superhero of all time.

It’s always nice to dethrone the king with another character, we don’t want to see him winning EVERYTHING.

That being said we have seen quite a few Superman Inspired Workout Routines as well.  It’s going to look almost like Thor’s list but with a little bit more diversity among the actors!

We also have our Henry Cavill Workout, Tyler Hoechlin Workout, Brandon Routh Workout, Tom Welling Workout, and since we were technical with voice actors for Wonder Woman, we also have to give Matt Bomer credit as his voice acts as Supe!

Wooo, that was a mouth full.

You can check out The Superman Inspired Workout Routine here.

NUMBER ONE: THE HULK

Did you guys see this one coming?

I think this one is quite self explanatory with an argument maybe coming in for Superman and Hulk to swap positions, but nevertheless we’re going to give it to the big green guy!

It’s also great because it gives us the opportunity to share some pretty awesome workout routines.

We’ve even seen a few different workout routines and Hulks here at SHJ that you guys might find fun.

And, we know he’s the strongest superhero of all time, so his routines are all built around getting…well…STRONG!

You can check out The Hulk Inspired Workout Routine here.

And now it’s time for some honorable mentions.

These are some characters that could have been added to the list had it been a top ten or fifteen, but considering I kept it to six they didn’t make the cut:

And of course quite a few more!

What do you guys think?  Tell me in the comments below.