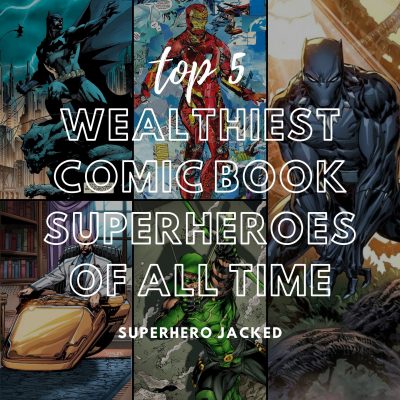 We had a couple awesome anime inspired listicles hit SHJ recently, but I thought it was time to come back to the superheroes.

These listicles help us comb through our Workout Database with characters and celebrities that The SHJ Army may otherwise not find, but they’re also fun in general!

Prior to taking a look at The Most Powerful Anime Characters of All Time, and a handful of other awesome topics, we did have a few superhero listicles as well to kickstart this new section.

Here’s a few other superhero listicles you may be interested in:

All of which were a lot of fun to write as well.

So if you have any suggestions on some other fun listicles you’d like to see us put together don’t hesitate to leave a comment below.

But now it’s time to get into The Richest Superheroes of All Time.

For this one I cut villains and I also held off on extending the list to 10-15 superheroes and characters because of how varied the actual net worth estimates were with all he sources I was finding.

So, to make it easy, I stuck to the top five richest superheroes and then another five honorable mentions below!

RICHEST SUPERHEROES OF ALL TIME

Don’t worry, Professor Xavier didn’t mind control all his money.  It was actually mostly inherited, but he did a great job sustaining it and using it to help The X-Men!

The majority of characters on our list inhereted their wealth, but the first two don’t really make it anywhere near the wealth we’ll some from the top three richest comic book superheroes of all time!

Similar to Charles Xavier, Oliver Queen is the only other character on this list with under $10 billion of worth.

He, like a few others on the list, also inherited his wealth and then used it to become a vigilante.  That wealth comes from his family business: Queen Industries.

Although he had his billions of inherited money, though, Queen still opted for a bow and arrow, which makes him much different than the next character on the list of the richest superheroes.

Next up is Batman!

Bruce Wayne is a character that I look up to most among comic book superheroes.

Not only does he use his inherited wealth from Wayne Industries to save Gotham and be one of the most badass superheroes of all time, but he’s powerless and doesn’t strictly rely on his tech (although he uses it to his advantage, of course).

Not too far ahead of Batman is Iron Man!

Tony Stark may have inherited Stark Industries from his father, but he is definitely a playboy, billionaire, philanthropist once that suit is off.

Similar to the other members of this list, Stark took his genius level intellect and used that in conjunction with his wealth to go out and save the world.

You guys ever hear of a little thing called Vibranium?  Well Black Panther controls the only place in the world that it can be mined.  Within Africa, we’re talking about Wakanda!

Vibranium is the indestructible material that makes Captain America’s shield!

We do have some honorable mentions, though. But, I’m sure you could have guessed if you’ve read any of my listicles in the past.

Here’s a few comic book superheroes that potentially deserve a spot on this list depending on what source you go by.

The Richest Comic Book Superheroes of All Time [Honorable Mentions]: