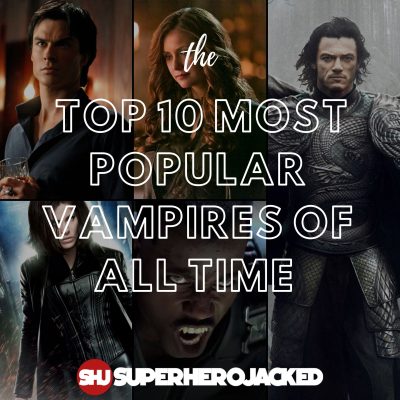 The Top 10 Most Popular Vampires of All Time is a list of characters that have popularized the vampire in pop culture today. It’s actually quite apt that we do a Top 10 Vampires List as it’s October and Halloween will soon be upon us.

This list was easy to think of as we already have a few vampire characters on the website like Blade, Katherine Pierce, and Damon Salvatore from Vampire Diaries, and Seline from Underworld. Just like these characters, we’ve got others that also make it on this list of the Most Popular Vampires of All Time.

The characters here are based on recent pop culture, but we’ll also be taking a look at some of the characters from popular shows during the 80s and 90s. Don’t be surprised if you see Spike or Angel on this list, because it’s highly likely that they’ll make it on here as they were quite iconic vampires during their time on primetime (lol).

For this one, I scoured the internet for help and almost every single listicle has a different take on who The Top 10 Most Popular Vampires of All Time are so what I decided to do was compile ALL of them together and place each character in the slot they averaged most as well as keeping the list to base TEN most powerful and then increasing the length of the normal runner-up slots I normally do in no specific order.

TOP 10 MOST POPULAR VAMPIRES OF ALL TIME

Starting off our list of The Most Popular Vampires of All Time, we have Buffy’s ally and beau, Angel!

Angel is a vampire that has struggled with his vicious and hungry side since 1753. It’s 2021 now, so if Angel were still hunting and killing bloodthirsty vampires, he’d be well into his 260s. He initially appeared in Buffy the Vampire Slayer alongside Buffy and her team of vampire hunters, but later moved to Los Angeles, which despite being called the City of Angels, had several hordes of vampires living in the city and preying on the unsuspecting humans.

Coming in at number nine on the list of the most popular vampires of all time is the oldest and strongest vampire in Louisiana, Eric Northman!

Eric is the lover of the human Sookie, and is the owner of the vampire bar Fangtasia. He is over 1,000 years old and like most vampires in the series has the same weaknesses such as holy water, sunlight, etc. He is ,however, stronger than other vampires as he is shown to be able to smash the vampire queen to the ground quite easily and is able to throw several humans several feet away with the flick of his wrist. He is popular because despite being a vampire, he feels no need to show off his strength and is quite confident in his ability to remain calm and maintain his human facade.

At number eight among the most popular vampires of all time is Buffy’s ally and former enemy, Spike.

Spike is a British vampire living in Sunnydale, where Buffy and her vampire hunter group called the Scooby gang live. They initially recognize each other as enemies and Spike even tries to kill Buffy and her friends several times. Later on, they are able to capture him and implant a microchip that prevents him from causing any of them harm. He later realizes that he’s fallen for the Slayer and fights alongside her to protect Sunnydale from other vampires. There must be something about Buffy that attracts male vampires – first Angel and then Spike. What are the odds?

Next up among our most popular vampires of all time is the main antagonist of the Vampire Diaries series and the vampire possessing Elena Gilbert, Katherine Pierce!

Katherine Pierce is the main villain of the Vampire Diaries and is the vampire-turned-human behind all the antagonists in the series. She was initially a human during the 14th century in Bulgaria but later on traveled to England after she was banished by her family for having a child out of wedlock. She later became a vampire as a means of self-preservation and consistently does actions that allow her to continue to live, even sacrificing others to ensure her own freedom and pardon.

Hero or Villain: Hero (Kind Of)

Just missing the top five and coming in at number six among the most popular vampires of all time is the vampiress, Vampirella!

Hailing from the planet Drakulon, Vampirella traveled to Earth as a means of saving her planet which had run out of their food supply of blood. She sets about trying to find dark remnants of her own race which she can use to restore Drakulon and save her race. Like most vampires, she has enhanced strength, speed, stamina, and healing. She can hear even the faintest whisper and can sense others’ emotions based on their scent.

Making it to the top five among the most popular vampires of all time is one-half of the main male protagonists in the Vampire Diaries, Damon Salvatore!

Damon is a 178-year old vampire who together with his younger brother Stefan, resides in Mystic Falls. He is portrayed as a selfish person, especially when it comes to the love of his life, Elena – to the point that he will do anything to keep her to himself, even driving away her loved ones. He eventually marries Elena later on in the series. When she falls under a magical slumber, Damon for a time loses his way, but eventually finds himself waiting patiently by Elena’s side for the day when she wakes up so they can live a life together and grow old together. He even takes the injection with Stefan’s blood so that he can turn human and live a normal life with Elena.

At number four among the most popular vampires of all time, we move into the vampiric anti-hero of the Marvel universe, Morbius!

Michael Morbius was a renowned biochemist until he developed pseudo-vampiric abilities after injecting himself with an experimental vaccine that was meant to cure his rare blood disease. After taking the vaccine, he found he possessed superhuman strength and speed and could see in the dark and find beings using echolocation, much like how bats do. Since gaining his powers, he has spent his time trying to cure his hunger for human blood and revert himself back to his old self.

Coming in and making the top three among the most popular vampires of all time is the hero of the Underworld series, Seline!

Seline is a vampire and a soldier of the vampire clan. She is regarded as one of the most skilled fighters the coven has, and she is loyal and believes in their war against the Lycans or werewolves. However, upon learning of deception in the coven, she begins her own investigation into their crusade and finds out that eons ago, a vampire princess fell in love with a Lycan slave and when she was murdered, this set off the war between the two races. After learning this truth, she allies herself with a Lycan hybrid named Michael and fights to protect him as she believes that he is the last link to the truth that can end the war.

Coming in at number two among the most popular vampires of all time is the half-vampire, half-human vampire hunter, the Daywalker, Blade!

Seriously, Blade was as cool as a hero could get back in the 90s and early 2000s.

Blade is the sire of a human woman and vampire. When he was born, his mother died at childbirth and he was raised by an old vampire hunter named Abe Whistler. He is trained to hunt and kill vampires and he does so with deadly weapons like guns armed with bullets tipped with holy water and knives and blades that can cut through flesh. What is interesting is that while Blade has all the powers of the vampire, he has none of their weaknesses and can therefore walk in direct sunlight, earning him of Daywalker.

Coming in at number one among the most popular vampires of all time is the original vampire, Vlad Dracula!

Originally releasing in Bram Stoker’s black and white movie Dracula, Vlad Dracula is the first of the vampires and the ruler of all its clans. In the movie Dracula Untold, we are shown the human side of the first vampire, and the role of Dracula is amazingly portrayed by Luke Evans. In the movie, Dracula is a Romanian Prince and is drafted by the Persian ruler to fight in his army in exchange for sparing his people from invasion. Later on, the new Emperor demands his son to do the same and this is when Dracula refuses. As a result, he dooms his kingdom and searches for a way to save his people and his son. He eventually does and becomes a vampire temporarily to protect his people and save his son.

The Top 10 Most Popular Vampires of All Time (Runner Ups):