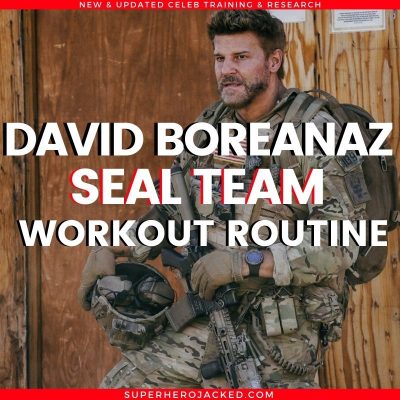 David Boreanaz isn’t the first member of SEAL Team to make it to SHJ, but I still don’t think we’re ready for this grueling circuit!

Oh, and just in case you were wondering, our first SEAL Team member was when we covered Max Thieriot’s Workout Routine after he got massive for the role.

Actually, after having Deadpool’s Calisthenics Workout on the site and going back to his original roots of being in the The U.S. Army Special Forces I decided I wanted to have a bit of a military week.

Between Deadpool and rattling off a few of our other character workouts that were inspired by military training within our Workout Database, I thought this was a perfect week to feature Boreanaz’s training.

AND, to top that off we’ll have a female celebrity workout who will fit the Seal training theme as well this week.

For this one we’re going to be pulling from two big sources, starting with Men’s Health.

Men’s Health starts us off by talking a bit about Boreanaz and his warm up with trainer Roy Paras:

Boreanaz’s workout prep has him facedown on the massage table, where his trainer, Paras, works to stimulate blood flow, see if there are any adhesions, and break up scar tissue.

They go on to bring us into the workout, starting with a bit more of a warm up and brings us into some words from Boreanaz:

The workout starts with light cardio on a stationary bike: something to warm up the muscles and get moving. His fitness inspiration is his character Jason Hayes, who informs a lot of his work ethic off set.

“The character himself has got a really aggressive drive,” Boreanaz says. “To even go into wanting to become a Tier 1 operator, they have to go through some serious physical endurance of strength training just to get through Buds, go through another 12 months of hell to even make it on a team. It’s really about the drive for me and the character.”

Men’s Health also shares that a good portion of the workout actually takes place outside as well, and tells us:

The rest of the workout features pullups, lifting, and a hopscotch-type running drill. We’re supposed to spend about half-an-hour together, but an hour in, Boreanaz insists on showing me one last spot.

And in an interview with Men’s Journal they not only share even more details, AND a sample of the workout, but they also give us some insight into just how often Boreanaz and the cast is training:

Boreanaz reports to Paras six days a week. Since the show films so many days out of the year, there’s a trailer on set filled with gym equipment where the whole cast of SEAL Team can get their pump on. On days when they aren’t filming, Boreanaz drives to EPX, but no matter where they go, the program stays the same.

MJ actually shares a full day of training with us, and they go through a super-similar warm up to what Men’s Health described (which makes sense, obviously), and then take us through four different circuits and some boxing to finish it off.

Which all fits the details of what Boreanaz and Paras shared with other sources!

I’ll be giving you the exact circuits Boreanaz and his trainer shared with Men’s Journal below, and I’ll also share some other resources that will be good for switching it up.

Get ready for some intensity and volume.

This is shared from an interview with Men’s Journal, Boreanaz and his trainer Paras.

Circuit A: Complete 2 Rounds for Time

Circuit B: Complete 4 Rounds for Time