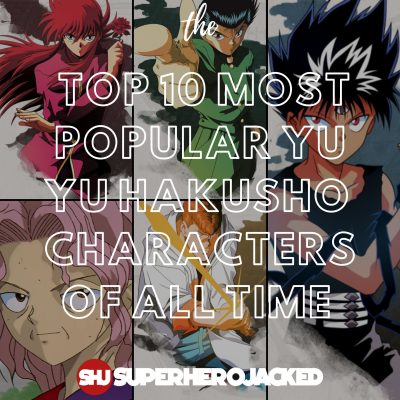 Yu Yu Hakusho was originally released in the 90s, but it has come back to popularity thanks to the airing of its original episodes on streaming services like Funimation and Netflix. It follows the adventures and escapades of Yusuke Urameshi, a teenage boy who is chosen to be a Spirit Detective, a human that has the power to perceive demons and protect humanity from them.

The characters on the top ten deserve their slot, but their popularity are just so close together, and there’s just SO MANY popular characters that even our runner-up section at the bottom of this article was hard to lock down.

BUT, before I rant about what makes each of these characters so great and well-loved, I just want to say that Yu Yu Hakusho is a classic anime. It’s been around for a while, and the fact that it’s still quite popular even after 20 years since its pilot is a feat in itself. I feel that what makes a show great is if it stands the test of time – and this show certainly has!

We have our Anime Workouts Database that lists the workouts of several characters across many anime shows  – and we also even have our Workout Placement Quizzes to help SHJ Army members find the best workout for them.

For this one, I scoured the internet for help and almost every single listicle has a slightly different take on who The Most Popular Yu Yu Hakusho Characters are, so what I decided to do was compile ALL of them together and place each character in the slot they averaged most as well as keeping the list to base TEN most popular and then increasing the length of the normal runner-up slots I normally do in no specific order.

TOP 10 MOST POPULAR YU YU HAKUSHO CHARACTERS OF ALL TIME

Starting off our list of The Most Popular Yu Yu Hakusho Characters of All Time we have the D-Class Demon Rando!

Rando is the main antagonist of the Disciple Selection arc in the first season of the series and is a demon who has mastery over 99 different techniques. He uses these skills in battle and his prowess with them is devastating. He is the first combatant of Yusuke who revels in inflicting pain on others and actually toys with his opponents to make their agony last longer. Why is he popular? Perhaps because of his many skills and the fact that he could use even Yusuke’s Spirit Gun to great effect.

Coming in at number nine on the list of the most popular Yu Yu Hakusho characters is one of The Three Kings who rule the Demon realm, Mukuro! Mukuro is said to be a dangerous and ruthless combatant. She’s so strong that most opponents would rather concede defeat than get into a ring with her. Talk about girl power!

At number eight among the most popular Yu Yu Hakusho characters is the leader of the Four Saint Beasts, Suzaku! Suzaku is a C-Class demon with the power to multiply himself and have his clones shoot fire shots at his opponent while he hits his enemy with an arc of lightning. During the Spirit Detective arc, Suzaku came into possession of the Makai whistle which allowed him to summon spirit insects that inhabited humans. Because of this Koenma charged Yusuke with finding Suzaku and taking back the Makai whistle in order to stop the possession of the humans.

Next up among our most popular Yu Yu Hakusho characters is the King of the Spirit World, Koenma! Koenma is the ruler of the Spirit Realm and is the one who resurrects Yusuke as a Spirit Detective. He is revealed as the benefactor and manager of Team Urameshi during the Dark Tournament saga. He has the power to metamorphose his appearance and shift from being a child to an adult at will.

Just missing the top five and coming in at number six among the most popular Yu Yu Hakusho characters is the Master of Yusuke and Kuwabara- Genkai! She is a very determined and practical old woman who has spent years mastering her use of spiritual energy. Because of this, she has developed rather harsh training techniques and uses them to train Kuwabara and Yusuke. Although appearing to have a hardened exterior, she does show that she loves Yusuke as when she heals his wounds when he gets injured in battle.

We’ve also mentioned Genkai in other lists like The Most Powerful Female Anime Characters and also The Greatest Anime Mentors of All Time!

Making it to the top five among the most popular Yu Yu Hakusho characters is Yusuke’s Spirit Guide and one of the Grim Reapers, Botan! Botan is a spirit that herds the souls lost to face their judgment in the afterlife. She is the first spirit Yusuke encounters when he dies saving a little boy in the pilot episode. She has the ability to fly and is also able to fuse the power of others to make them stronger with the use of the Power Sphere she has in her body.

At number four among the most popular Yu Yu Hakusho characters is Yusuke’s friend and former rival, Kuwabara!

Kuwabara has immense spiritual energy and after some training, was able to channel his energy to producing twin Spirit Swords. As the series goes on, we see Kuwabara hone his skills and his manipulation of his spirit energy, and he even gets to the point of becoming even more powerful than Sensui.

Coming in and making the top three among the most popular Yu Yu Hakusho characters is the series’ main protagonist, Yusuke Urameshi!

Yusuke is popular because he has been shown to have a tenacity and will to fight on that many viewers can relate to. He never gives up and will fight his hardest to win against even insurmountable odds. Throughout the series, fans see him hone his spirit abilities and even take the place of one of the Three Kings after Raizen dies.

Coming in at number two among the most popular Yu Yu Hakusho character is Kurama, a human who was fused with the soul of a Fox Demon.

He is considered an S-Class Demon and a lower S-Class Human fighter. What makes him popular is that he’s the brains behind Team Urameshi’s battle tactics and strategies. His intellect is so great that he can actually identify the weakness of an opponent when he meets them for the first time. This definitely helps the team when they need to battle stronger opponents.

Coming in at number one among the most popular Yu Yu Hakusho characters is the Demon Ninja, Hiei! Hiei actually comes in at 6th in our list of Most Powerful Yu Yu Hakusho characters. He’s a C-Class Demon that fights alongside Team Urameshi in the Dark Tournament and also has some wicked cool fighting moves. What makes him popular? Maybe the fact that his battles are just some of the dopest fight scenes in the series. Or it could be the fact that he has pre-cog and can actually anticipate his opponents’ moves and counter them faster than one can blink.

Would you place Hiei at number one or does Kurama give him a run for his money?

The Most Popular Yu Yu Hakusho Characters of All Time (Runner Ups):