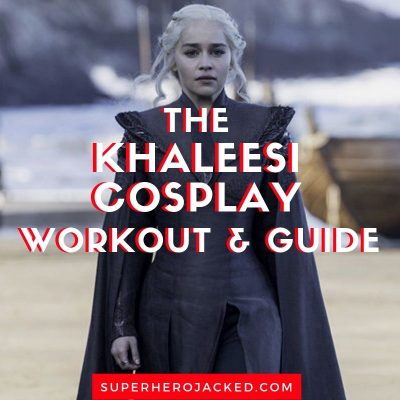 Who wouldn’t want to be The Queen of Dragons?

I mean, I suppose anyone who watched the ending…

But let’s forget about that for a minute and remember just how amazing Dany was throughout the entirety of the show.

If you don’t already know, by the way, this is our new category that I announced I’d be starting due to the high demand in cosplayers we have hitting the site, but it’s also an opportunity for me to give you secondary options to the main character workouts that will be slightly more generic and beginner-intermediate oriented; whereas the character workouts get pretty high volume when we begin talking about our overpowered characters!

It’s a good thing Dany is short, because Jon Snow (who we also saw this week in the cosplay category) is also short!

Although, I think that makes her that much more badass – am I right? 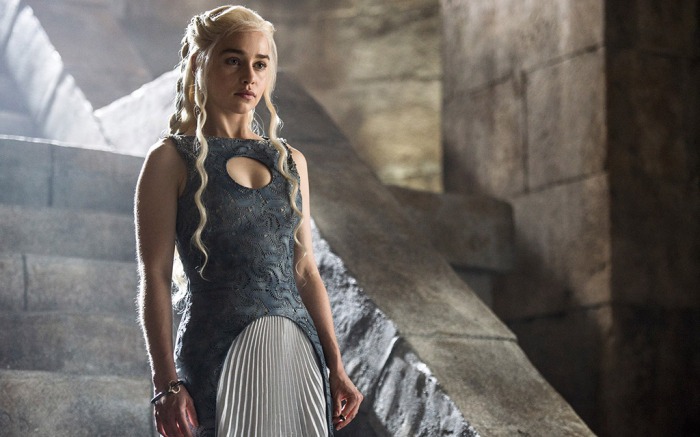 Either way, my suggestion would be: The Ladies Glutes, Tone & Slim Vol. 2 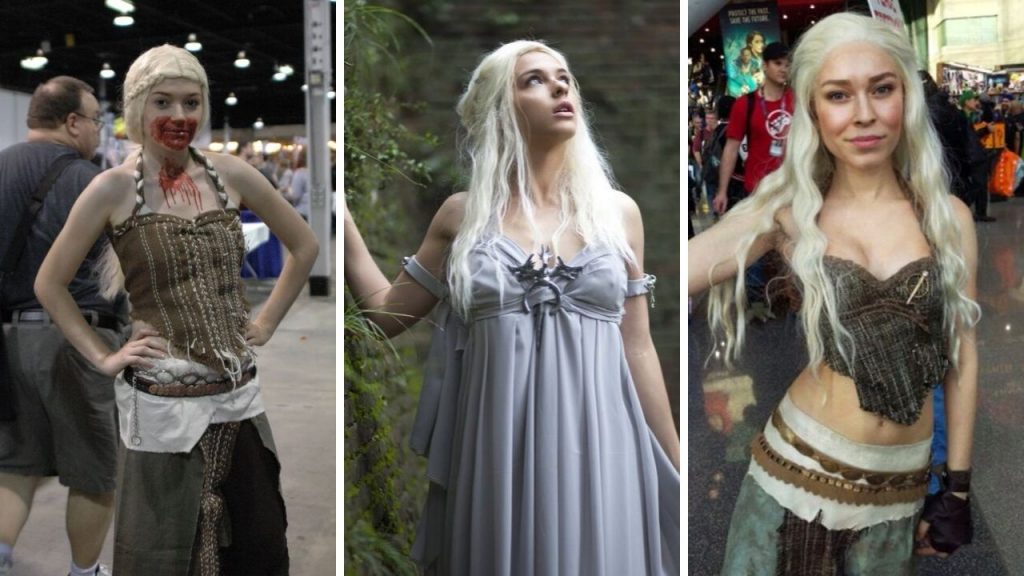 Here’s a section you guys have never seen before (although in a week or two I’ll have to stop saying that I guess).

In the last couple articles in this category I tried molding together the cosplay and workout routine research section, but I’ve decided it’s better for you guys if I separate them so we can talk a little bit more about variations and look at some more information and options for you.

As you can tell from the picture above Khaleesi cosplay has a handful of options (and I didn’t even include later seasons cosplay which I’ll be sharing below).

Here’s some suggestions, and I tried to diversify it:

**These are not the budget options.  These are from our friends over at EZCosplay and are NOT simply “Halloween Costumes” but cosplay outfits that are made to transform you into these characters.**

**These are budget options that are from Amazon and may be simply Halloween Costume items, but are also the top options we suggest from the platform.**

Along with this killer workout I’m going to build for you to turn you into The Dragon Queen, these are our favorite options for her outfit. 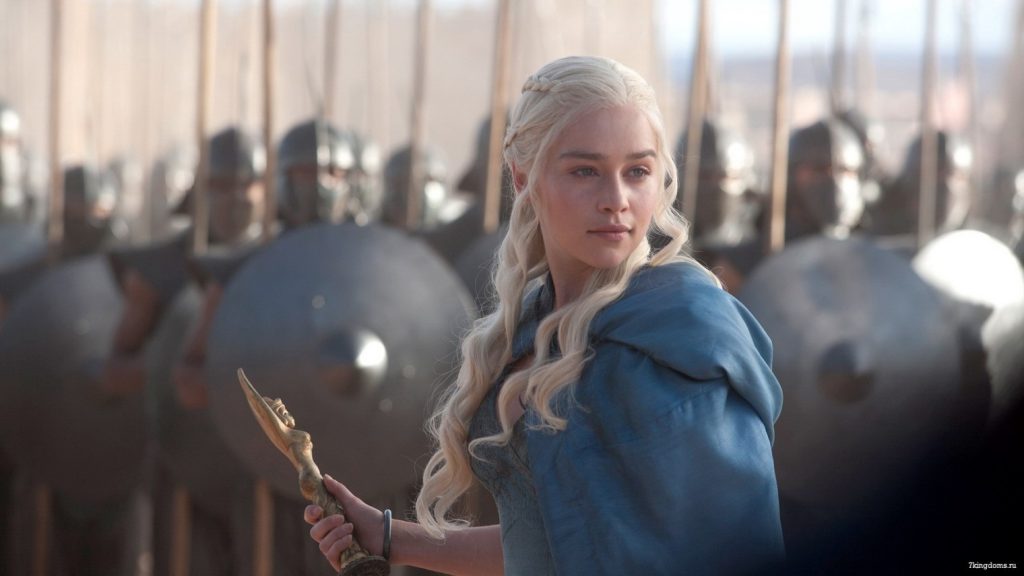 So we have some more fun in this section.

So let’s start at Game of Thrones Wiki Fandom with a bit of a biography for Queen Targaryen:

Queen Daenerys I Targaryen, also known as Daenerys Stormborn, colloquially known as Dany, was the younger sister of Rhaegar Targaryen and Viserys Targaryen and only daughter of King Aerys II Targaryen and Queen Rhaella Targaryen, who were both ousted from the Iron Throne during Robert Baratheon’s rebellion. She also served a brief tenure as the de facto Queen of the Andals and the First Men and the twenty-first ruler of the Seven Kingdoms, after claiming the throne from her predecessor Cersei I Lannister, who was killed in the Battle of King’s Landing. However, Daenerys was never formally crowned, nor did she sit upon the Iron Throne. Upon her destruction of a surrendered King’s Landing, Daenerys was assassinated by Jon Snow to prevent further carnage. She was eventually succeeded by Brandon the Broken (an elective monarch chosen by the Great Council of 305 AC).

After the respective deaths of her remaining brother, Viserys, and husband Khal Drogo, Daenerys builds up her own base of power in Essos, where she hatches three dragons, is joined by prominent advisers, such as Ser Jorah Mormont and Tyrion Lannister, liberates the slaves of Slaver’s Bay, acquires the Unsullied of Astapor, and unites the Dothraki. After the War of the Five Kings, Daenerys rules Meereen for a period of time before sailing to Westeros to begin her war to take the Seven Kingdoms with her followers and allies to claim the Iron Throne from Cersei Lannister.

During her campaign, Daenerys negotiated with Jon Snow, the King in the North, who sought her help against the returned White Walkers, a threat seeking to wipe out all of humanity. The two became allies after Daenerys’s allies in the Reach and Dorne had been destroyed by House Lannister’s forces. After striking back, she agreed to parley with Cersei in King’s Landing to negotiate a temporary truce while they fight the army of the dead. To that end, she allowed Jon Snow to venture beyond the Wall to capture a wight as proof to provide for Cersei. Daenerys rescues Jon’s men when they are encircled by the army of the dead, though one of her dragons is slain by the Night King. Following the attack, Jon pledges allegiance to Daenerys, before presenting the wight before Cersei, who agrees to a truce. Daenerys then sails north with Jon, putting her quest for the Iron Throne on hold in order to fight in the Great War; the two give in to their love during the voyage, unknown that they are in fact related, as Jon is secretly Daenerys’s nephew: the son of Rhaegar and Lyanna Stark. Soon after arriving at Winterfell, she and Jon discover the truth of his parentage, before fighting for the north at the Battle of Winterfell, her forces contributing significantly to the survival and victory of the living.

Alright, so it’s a bit longer than Jon Snow’s bio.

It’s so you know what we’re workin’ with here.

As we did for Jon Snow, I’m going to be scaling down Emilia Clarke’s regular training a bit and instead turning it into a beginner focused routine.

We’ll be using some of the same techniques we used for Jon’s, but with a little extra focus on glutes and legs for the ladies.

For the sake of the cosplay that I suggest I will focus in on a couple things:

That should get you guys right into the character’s physique.

Whether or not you want to throw on the hood and mask is completely up to you. 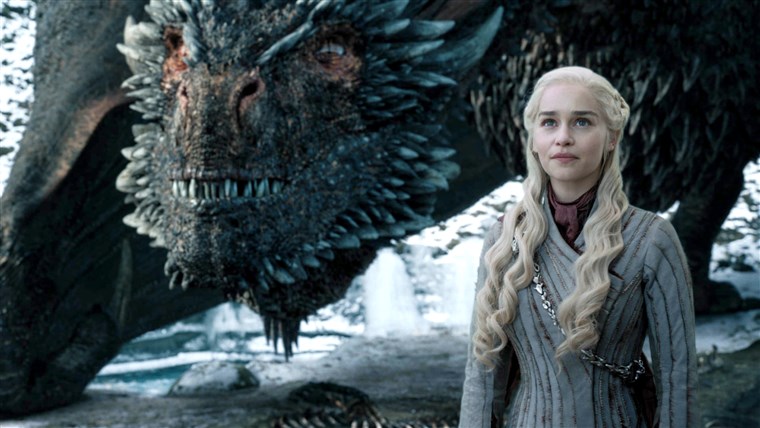 Five days a week might seem high volume but we’re going to be using 3 full body workouts a week paired with 2 sessions of cardio.  They’ll last anywhere from 30-45 minutes a session and be nice a quick and easy for you guys so make sure to pair this with an awesome diet plan as well for the best results.

**This can be done on any 5 days of the week, but this is how I would likely format it for myself.**

Hack Squat or Back Squat

I tend to vary my cardio 10-15 minutes each.  Sometimes I’ll do 10 minutes and hop off and eventually come back to that same machine, and sometimes I’ll stick to it for one 15-20 minute session before moving on to the next.

Complete a total of 30-60 minutes each cardio day. 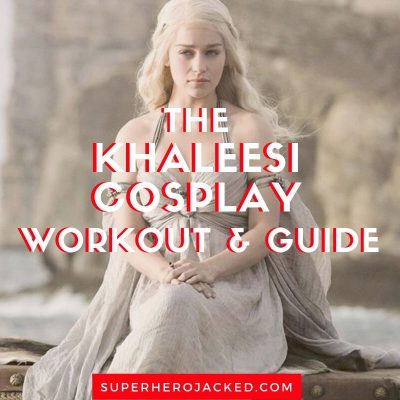 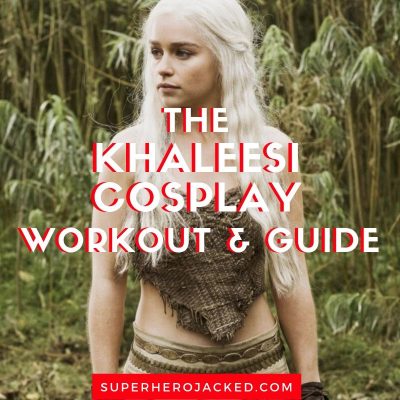 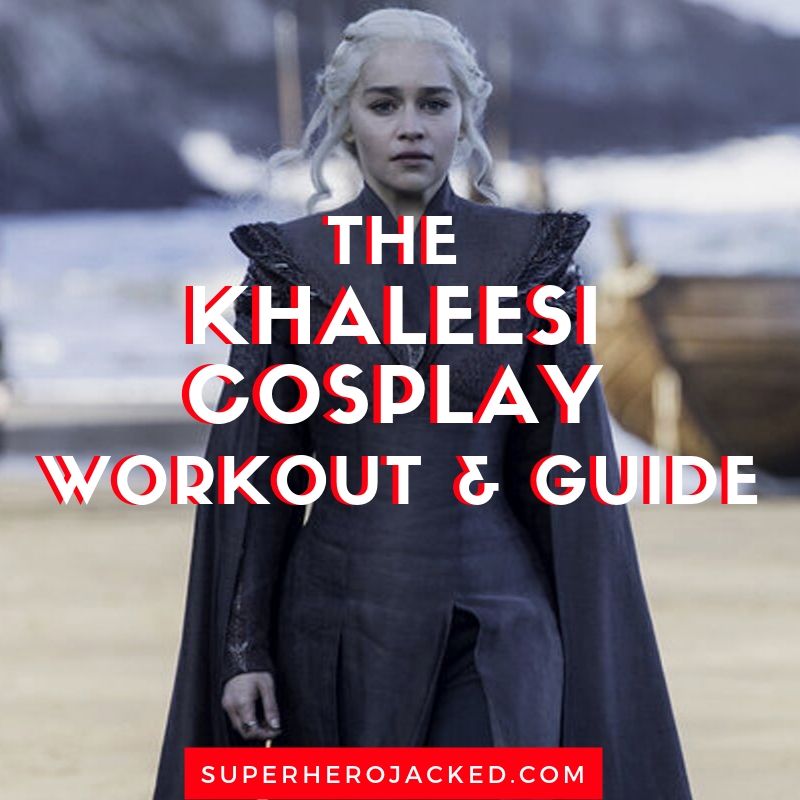 I HATE SPAM! Don't worry, your email is safe with me.

I freakin' hate spam! Don't worry - your email is safe with me!