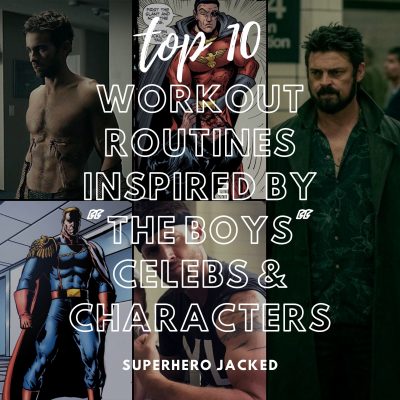 Who is ready for Season Two of The Boys!?

We have OVER ten workouts from The Boys celeb and character inspired workouts.

Yes, you read that right.  OVER ten.  Surprise.  We’re back to my bonuses like I used to do on every single listicle that hit SHJ.

I know, I know, exciting stuff.

As you guys know our Workout Database is the most comprehensive database on the internet and we’re slowly creeping to that 1,000 workout market.

For that reason we have awesome listicles just like this one to help you guys find your favorite celebrities and characters that might be doing a good job of hiding in the database and out of site.

Some of our other listicles revolve around things like:

But just to be clear about how this works: we’re going to be basing this listicle around a few things (none of which are me simply saying “This is an exact order of the best workouts”).

Here’s what we’ll be working with:

So sit back and get ready for WAY too many workouts to use before Season Two comes out….

Starting with our celebrities from The Boys:

This is the obvious first choice, am I right?

Not only is Karl Urban a badass in real life, but everyone here is going to want to be Billy Butcher.

Sure, he has a bit of a dark side, but we all love him.

You can check out the full Karl Urban Workout Routine and Diet Plan here.

New up is The Deep himself.

Sure, he plays a perv in the show, BUT, Chace Crawford is actually awesome and got ripped for the role.

I also promise that this workout WON’T cause you to grow the gills Crawford shows off when he gets shirtless as The Deep.

You can check out the Chace Crawford Workout Routine and Diet Plan here.

Technically speaking Ackles isn’t a part of The Boys just yet, but he has been casted for Season Three.

I know what you’re thinking: “But we literally are JUST getting Season Two as you publish this.”…but that’s okay!

Ackles is set to play Soldier Boy, and I couldn’t live with myself if I didn’t include him in this one.

You can check out the Jensen Ackles Workout Routine and Diet Plan here.

Esposito plays Susan Raynor in The Boys, who works with the CIA and makes Butcher some big promises (that don’t really go as planned).

When I first went into this one I was trying to get some female faces from The Boys onto SHJ and was pleasantly surprised with Esposito’s nutrition and workout routine that I was able to share.

You can check out the Jennifer Esposito Workout Routine and Diet Plan here.

And moving into our characters from The Boys:

Awe yeah! We led the celebs with Karl Urban and now we lead the characters with Billy.

Butcher is dark in the comics just how he is in the show, but rather than dark I see badass.

So, we created his workout routine to reflect that.  Think of The Punisher as a good example of this.

Butcher was also a Black Ops member, so he definitely no joke…

You can check out the Billy Butcher Workout Routine and Diet Plan here.

Homelander might be stealing the spotlight (light, get it?) but this one is Starlight!

Starlight was another one of my favorite characters in Season One.

She had some moments where she was hesitant and a little bit late to the party; but she always showed up and took a stand when it counted.

That being said: she’s also super strong!  So this one was definitely a fun workout to create for you guys.

You can check out the Starlight Workout Routine and Diet Plan here.

Homelander is like The Boys version of Superman (if that wasn’t obvious), which makes his workout extremely hard and vigorous.

So if you’re looking to train for strength, speed, endurance and any other power you can think of….all at the same time…then this is the one for you!

You can check out the Homelander Workout Routine and Diet Plan here.

Next up is our female counterpart to Homelander.

She’s not quite as powerful, but can be compared to Superman and Wonder Woman.

You can check out the Queen Maeve Workout Routine and Diet Plan here.

The next two on our list are new to the site in the last few weeks leading up to Season Two.

Black Noir actually has a ton of awesome powers to build a workout around, so he was definitely a great way to lead us back into The Boys themed fun.

He’s also a great character to pair with one of our bonus workouts, in my personal opinion (and we even saw them go head to head).

You can check out the Black Noir Workout Routine and Diet Plan here.

Stormfront is our newest character that is coming to The Boys Season Two.

He is our new antagonist on The Seven!

And I say “HE” but his character is actually gender-swapped from the comics to the show, so he will be portrayed as a female character and is being played by Aya Cash!

He is often compared to Thor, so I think the fact that he is gender-swapped is pretty fitting considering Thor has representations as both a male and a female character!

Whether that portion of the casting was done on purpose or not, it was nevertheless very fitting.

You can check out the Stormfront Workout Routine and Diet Plan here.

Bonus One: The Female

Oh, c’mon! How could we not include The Female!?

We actually saw The Female and Black Noir go at it in Season One and I’m hoping to see some more action from her in Season Two as well.

She may be mute at the moment, but she’s extremely strong and I’m ready to see what else she can do!

You can check out The Female Workout Routine and Diet Plan here.

And now it’s time to get fast as hell!

If you couldn’t tell: this is The Boys play on The Flash.

For that reason A-Trains workout routine actually shares some of the training we’ve seen in some other Flash workout routines with it’s own flair added in as well.

If you’re looking to run: use this one!

You can check out the full A-Train Workout Routine and Diet Plan here.