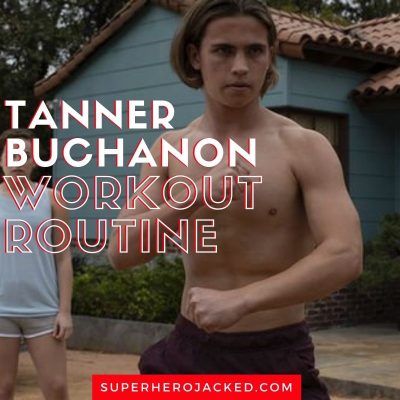 As I mentioned in Xolo Mariduena’s Workout Routine: we finally are getting some awesome information from the two main stars behind Cobra Kai!

If you’re an Academy member you know I rock my Cobra Kai headband during my workout all the time and I’m a HUGE fan of the show.

Prior to this we’ve had our Cobra Kai Workout Routine and even our William Zabka Workout and Diet, but now we’re stepping up a notch.

In his interview with Men’s Health, which was really him showing us the full workout rundown with his training, Julian Greaux, Tanner breaks down each movement for us.

As you’ll be able to tell when we get into the full workout routine below there are actually even more specific movements that are mixed martial arts and karate oriented than we saw in Xolo’s routine!

Buchanon makes a joke about needing to strengthen up his legs and be able to kick high because if not he wouldn’t have been able to kick Miguel over the railing, but in reality he really does look like he has been working hard on his kicks and lifts to prep for Season Four!

If you’re looking for some other mixed martial arts style routines, we also have a handful that I consistently share here within our character workouts to step it up a notch into MMA:

You can even pair Tanner Buchanon’s workout routine AKA Robby Keene Cobra Kai’s Workout with some of the workouts I’ve shared above to turn it into a full fledge weekly routine!

Let’s get into it!

This workout is shared by Men’s Health and Tanner Buchanon!