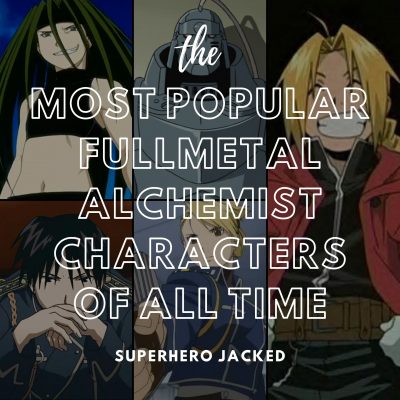 Let’s be frank, Fullmetal Alchemist is one of the BIGGEST anime of all time. And now we’re going to break it down into smaller pieces and discuss who deserves to be recognized as the most iconic of all.

Being as popular as this anime is, stating who is MOST popular is going to be a challenge, but if Edward can get through it all, so can I.

Many characters in the series deserve recognition, but only 10 will make the cut. However, I will be sure to throw in some runner-ups as well.

I mean, hell, Edward even made it onto our list of The Most Powerful Anime Characters of All Time!

BUT, before I get into the popularity of these characters, I do want to point out that Fullmetal Alchemist has also made its way into our ever growing Workout Database.

We’ve been on a huge Fullmetal Alchemist kick lately at SHJ and are working hard on getting a mini-database together for you guys, as well as a placement quiz to help you find your ideal workout!

Feel free to check out our Anime Workout Database in the meantime.

For this one I scoured the internet for help and almost every single listicle has a different take on who The Most Popular Fullmetal Characters are. So what I decided to do was compile ALL of them together and then took the average of all the compiled ratings and placed them in their slot accordingly. Additional characters who did not make it in the top ten that I want to mention as well can be seen in the runner-up section.

Starting off our list of The Most Popular FMA Characters of All Time we have the scandalous Homunculus: Lust!

If you’re not careful, she’ll have her finger wrapped around you before you even know what happened.

Well maybe not quite wrapped around, but more like impaled through you and whatever cover you think might have stopped her from tearing through you. She is known as “The Ultimate Spear” due to the endless length that her nails extend, and their ability to pierce through basically any substance to hit her mark.

Despite her name being Lust, she is not terribly lascivious in character. She is more of a sadist who “gets off” on torturing her victims. She is typically calm and collected, utilizing her charm and intelligence to manipulate others for personal gain. Where she may not seem all that lustful in nature she makes up for in her sheer BLOODLUST.

Coming in at number nine on the list of the most popular FMA characters of all time is Winry Rockbell!

In need of repairs… This is your woman!

Another beauty here on the list today is Winry. She is anything but lady like in character though, as she is a huge tomboy who is usually seen in her mechanic’s jumpsuit.

Winry is not only a highly skilled automail mechanic, but also possesses basic skills in surgical procedure. She is an essential asset to the Elric team due to this combination of skills. Not just any “surgically precise mechanic” could provide support for Edward’s arm and Al’s armor after all.

At number eight among the most popular FMA characters of all time is a master alchemist: Izumi Curtis!

Izumi being in the top ten for most popular is no surprise. She is an absolute beast in both her alchemical ability and physical prowess.

I know, I know, this isn’t a list about power but I can’t help but say it…

Izumi’s greatest ability is not in her combat ability however, but in her ability to perform alchemy through her sheer will without the use of runes and transmutation circles. Izumi’s humble “housewife” persona that she typically holds is what I believe makes her so enjoyable. One would never expect her at face value to be the dangerous master of alchemy and combat that she truly is. But I dare anyone to make the wrong comment towards her and see for yourself what happens next..

Next up among our most popular FMA characters of all time is the ultimate shield: Greed!

Greed is true to his name as a homunculus. He fights for the riches of the world and wants to have it all for himself. Deep down this is not who truly lies at his core…

Greed in the end really just wants “all the friends.” He is an arrogant but charismatic character that you can’t help but want to wait and see what becomes of him throughout the story. Two scenes in particular speak to his deeper desires. The first being when Wrath destroys his chimeras, in which he retaliates angrily despite claiming that they were just possessions. The second scene that shows this true desire for friendship is when he kills his friend Bido in order to reclaim lost memories and then breaks into tears soon after over his friend’s unfortunate passing.

That right there would make your daddy cry…

Coming in at number six is the softhearted and compassionate Alex Louis Armstrong!

Alex Louis Armstrong is a towering beast of a teddy bear. Despite his intimidating physique, he is a sensitive and emotional man who you just want to give a good hug.

Alex’s compassion is shown out on the battlefield in the way he cares and protects those around him. The death of anyone, friend or foe, seems to tear him up inside. He is also a soldier through and through who respects those of rank and draws a high honor from the Armstrong family name.

And speaking of soldiers of the Amestrian military…

Coming in at number five is a sharpshooter gunning for the top: Riza Hawkeye!

So let me just start with this quote here: “I like guns. Because unlike swords and knives you don’t have to feel your victim die.”

Riza on the surface is the perfect soldier. She is a calm and collected individual who rarely relaxes her attitude on the job. Deep down inside her is a kindness that understands the burdens of a soldier. This makes Riza a very relatable character as she must put on a strong face, but deep inside feels the weight of her own actions and of those around her.

At number four among the most popular FMA characters of all time we move into the ever hateful Envy!

Envy is one of two homunculus who possesses a form true to its personality and traits. I refer to IT as it due to the fact that Envy itself has no identifying gender.

Envy is a true sadist who relishes in human torment and mistreatment. Envy deep inside constantly feels, well envious, of those around it. Among those who Envy enjoys, mainly its homunculi comrades, it is quite rambunctious and at times humorous in character.

Coming in and making the top three among the most popular FMA characters of all time is the armored titan Alphonse Elric!

Alphonse is the kind-hearted and affable younger brother of Elric. He is the byproduct of a failed human transmutation experiment in which his soul was seperated from his body. His soul was then alchemically bound to a powerful suit of armor, which ironically, cannot sustain too much damage or his soul will detach from the armor held by a Blood Seal.

Coming in at number two among the most popular FMA characters of all time is the Hero of Ishval himself: Roy Mustang!

Roy is an absolute powerhouse of a character… just thought I’d start there.

I know, I know this is a popularity list but I couldn’t resist…

As a person Roy is a flirt who tends to shirk his duties and lay them on his subordinates. He enjoys flaunting his uniform and is typically seen in formal attire even in a more casual setting. This is not the man who truly lives inside Roy though. He is a brilliant tactician who would put his own life on the line for the well-being of his subordinate and those in his care.

Coming in at number one among the most popular FMA characters of all time is the Fullmetal Alchemist himself: Edward Elric!

Edward is the main protagonist of the series and there is good reason why. Throughout the series Edward powers through trial after trial and comes out on top.

Edward is the abrasive and immature older brother of Alphonse Elric. However, this personality that most know him for is only who he is on the surface, similar to Roy Mustang. Deep down Edward is a selfless, loyal and greatly compassionate young man just like his brother.

I can agree with Edward making it to the top spot as he truly has an amazing journey and character development as the series carries forward. What do you think?

The Most Popular Fullmetal Alchemist Characters of All Time (Runner Ups):