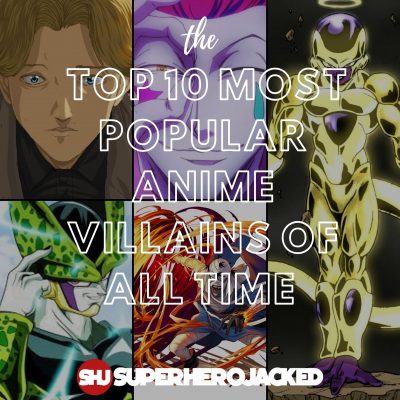 We’ve all grown up seeing at least one anime show. These days, Japanese animation studios dish out anime after anime each year, and some of those shows have become so popular that there are entire comic cons devoted to just those characters with people from all over the world flying in and cosplaying their favorite characters. I personally never got into cosplay, but I do love watching anime.

The characters on this Top 10 list deserve their slot not only because of the familiarity of the show but also their own personalities we discover in each show.

These villains have proven that even villains have a certain depth to them, and despite them being bad guys, we immediately recognize their name when they are mentioned because of the lasting impression their character gave us – even if that impression is what a bad egg really looks like.

I searched several notable sites such as TheTopTens, CBR, and Ranker to come up with the list and these are the top 10 villains that came up the most often on those websites. Hope you enjoy it!

TOP 10 MOST POPULAR ANIME VILLAINS OF ALL TIME

Coming in at number ten among our list of the most popular anime villains is the antagonist and nemesis of Kenshin Himura, Shishio Makoto!

Shishio Makoto is the leader of the Juppongatana – a group of anti-government warriors bent on destabilizing the new Tokyo government. He is the main antagonist in the series and is the successor after Kenshin abandoned his Battosai role. He is a precise and masterful swordsman and is powerful enough to evade and counter even Kenshin’s strikes. They are evenly matched as they are both able to predict the movements of the other after seeing each other in combat. His only drawback is his extreme hyperthermia – his body temperature continues to increase the longer he fights and his body is unable to cool itself down.

Next up, at number nine on our list of the most popular anime villains is the ultimate creation of Dr. Gero, Cell!

Cell was created as the Ultimate Warrior, combining DNA and abilities from the greatest warriors like Goku, Vegeta, Piccolo, and Frieza. He is one of the few androids not actually completed by Dr. Gero himself, but by his highly intelligent AI from another dimension. He is the culmination of years of genetic research and has the abilities of the greatest fighters like Goku’s Kamehameha, Vegeta’s Big Bang attack, and the Death Beam from Frieza.

At number eight, we have the main antagonist in the show InuYasha, Naraku!

Naraku is a half-demon spider that was the result of the human Oniguma being badly burned after an explosion nearly took his life. He desires the Jewel of Four Souls which grants its user near-invincibility when all pieces are gathered. As a half-demon, he is able to regenerate and has enhanced strength, speed, and reflexes. He has the power to absorb other beings, inheriting their powers in the process.

At number seven on our list of the most popular anime villains, we have the bane of Joe Joestar’s life – Dio Brando!

Dio Brando was the child of a petty criminal and was raised with the belief that you could only gain what you wanted in life if you took it for yourself and didn’t give a hoot about the ethics of it. Indoctrinated with this belief, Dio put on the facade of a goody-goody two shoes so that he could live in with the Joestars, a rich family who his father once tried to rob. He made it his life’s goal to upstage Joe Joestar and prove that he was more superior to him in every aspect.

Just missing the top five most popular anime villains of all time is Envy from Fullmetal Alchemist.

As one of the homuculi, Envy has the ability to shape-shift into any being he desires. He is able to do so while also copying that person’s voice. He is one of only two homunculi who have a true form, physical incarnations of the traits they embody. Because he is the embodiment of Father’ envy, he is immortal and has enhanced strength, speed, durability, and reflexes. In his weakened state, he can even possess humans and make them an extension of himself.

Starting our top five most popular anime villains of all time is a member of the Phantom Troupe in Hunter x Hunter, Hisoka Morow!

Hisoka is a completely self-serving and sadistic individual. He does what he wants, when he wants because he just feels like it. He takes pleasure in inflicting pain on others weaker than him and sometimes allows weaker opponents to escape and become more powerful just so that they can offer a greater challenge for him later on. This is why he actively seeks powerful Nen users to fight against and toy with.

Next up, coming in as one of our most popular anime villains is Sosuke Aizen from Bleach!

Sosuke is a character who follows the normal trope of a good guy turned bad because of ambition. He originally desired what was good for the Soul Society, before he become deluded that he knew what was good for the Society and decided to take it by force. He staged a war using Arrancar with the Soul Society before finally being defeated and imprisoned for his crimes. He is a master manipulator and is a powerful user of Kido Spells. He is also a master hand-to-hand combatant and swordsman.

Coming in within the top three most popular anime villains is Light Yagami, the most corrupt wielder of the Death Note!

Light Yagami is a genius and a child prodigy. He discovers the Death Note at a young age and immediately recognizes its power to control society and manipulate people. He decides to use the power of Death Note to rid the world of evil people and become the new society’s god.

Coming in at number two among the most popular anime villains is the vilest and evil character in Monster, Johan Liebert!

Raised as a spy by the government, he escapes their custody and uses his gifts of persuasion and intelligence to convince others to kill and manipulates people into doing his bidding before killing them for his own pleasure. He is the main antagonist in the show and is so depraved because there is no rhyme or reason as to why he kills. He just kills because he wants to watch the world burn to the ground.

Coming in at number one among the most popular anime villains is the King of Universe 7, Frieza!

Frieza is by far the most recognized villain in all anime. Even though people haven’t watched the series, his name is instantly recognizable. Aside from this, Frieza boasts some extremely powerful abilities such as the Death Beam and telekinesis. He is considered as Goku’s greatest enemy and archnemesis. Unlike other villains who actually look and act like villains, Frieza presents a calm and composed demeanor which hides his true sadistic and sociopathic persona.