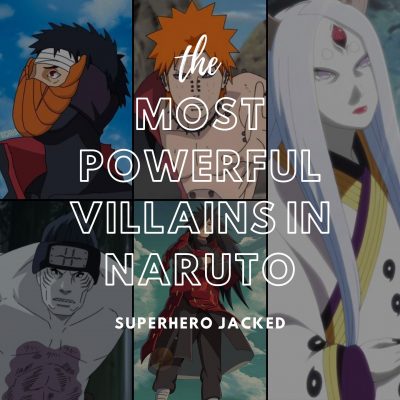 Which would only make sense considering our list of the overall strongest had a nice split of heroes, villains and even anti-heroes and anti-villains!

I mentioned in our other Naruto lists (especially the most powerful), that it was one of the hardest to actually rank compared to our other anime that we’ve broken down the strongest for – but thankfully ranking the villains was at least slightly less difficult.

I’m not saying it was easy, but it was definitely easier than the mixture of heroes and villains.

Part of that is how I went about ranking them.

For this one I went through a handful of different lists, as well as combining them with the rankings we’ve already seen – and for the most part our different sources were in agreement – which is always a good thing.

I should admit that Naruto isn’t my all time favorite anime, although it’s definitely in my top five, but I pump out these lists and keep the Naruto Inspired Workouts coming specifically because I know you guys love it so much.

We even recently got our Naruto Workout Placement Quiz which helps you guys find the best routine specifically for you and your goals.

But these listicles are not only fun, but they also help you find characters that may have otherwise been hidden within our Anime Workouts Database.

Starting off our list of the most powerful Naruto villains is Gaara!

Gaara may not have made it to our list of The Most Powerful Naruto Characters of All Time, but he did make it to our most popular, and does deserve a spot among the strongest Naruto villains as well.

His Wiki Fandom page breaks down some of his incredible abilities by describing this for us: “Having been trained since infancy as Suna’s “ultimate weapon”, Gaara was exceptionally strong even as a child, effortlessly killing the countless assassins sent after him. As a genin, he became known internationally for completing B-rank missions. He also set the record time of completing the Chūnin Exams in the Forest of Death, and unscathed; a feat normally incapable for a chūnin.”

Next up on our list of the strongest Naruto villains of all time is Kisame Hoshigaki.

We actually haven’t seen Kisame outside of having recently brought him into our Jump Rope Workouts Database (meaning he hasn’t been in any Naruto lists), but his placement among the top villains was virtually unanimous among all the sources.

Here’s what the Naruto Wiki Fandom says about his powers: “Kisame was an extremely powerful shinobi who earned admittance into the Seven Ninja Swordsmen of the Mist and later Akatsuki. He easily killed his former master, a member of the Seven Swordsmen’s strongest generation while the man wielded Samehada against Kisame.”

Next up among our Most Powerful Villains in Naruto is the first from our Otsutsuki Clan.

Momoshiki’s Wiki Fandom gives us some insight into why he shows up among our most powerful: “Because of the lengths that Kaguya went to prepare against Momoshiki and Kinshiki (and Urashiki in the anime), Sasuke speculated that they were a threat greater than her, confirmed in scrolls found in one of Kaguya’s dimensions. Momoshiki also claims that he could have defeated Kaguya himself.”

Do you think Momoshiki could have defeated Kaguya himself? I personally do not.

Moving close to our top five strongest Naruto villains of all time brings us our second Otsutsuki member with Isshiki coming in at seven.

These two Otsutsuki clan members could arguably come in above our three or four villains, but I found that most sources had them ranked this way as well for certain reasons.

That being said, Isshiki is otherworldly powerful, as described by the Naruto Wiki here: “Isshiki’s power is so vast that Jigen’s body, despite the various enhancements he gained to be monstrously powerful in his own right, has difficulty containing it, preventing him from using the full extent of it for long. While limited, he could pressure both Naruto Uzumaki and Sasuke Uchiha, the two strongest shinobi in history simultaneously, and upon exerting himself more, decisively defeat both of them, sealing the former while nearly killing the latter.”

Coming in at number six among the most powerful Naruto villains is Orochimaru.

I personally was going to place Orochimaru more around the eighth spot, but sources disagree and were in unison placing him more around this position. What do you think?

One source writes this about his powers: “Orochimaru is often written off as one of the weaker Naruto villains, but this is a mistaken view. In fact, Orochimaru is one of the most terrifyingly powerful characters in the Naruto universe. Why? Because he’s made himself almost impossible to beat. Using his Living Corpse Reincarnation technique, he’s able to transfer his consciousness to new bodies when the old one gets finished. His extensive knowledge of different jutsu, as well as his possession of the DNA from other ninjas that allows him to use their powers, make those bodies pretty hard to stop in the first place.”

Starting our list of the top five most powerful Naruto villains is none other than Itachi Uchiha.

I actually have Itachi listed as more of an “anti-villain”, but he’s definitely coming in on this list nevertheless!

Itachi came in at number one among our Most Popular Naruto Characters of All Time, and he was the strongest member of the legendary Uchiha clan by the age of 13, but there were still a lot of Naruto characters who surpassed him in overall powers and abilities throughout the course of the show.

And not surprisingly, we have a handful of other Uchiha’s still left to see…

Similar to our Otsutsuki Clan, we have a bunch of Uchiha’s on this list as well.

Coming in at number four among the most powerful villains in Naruto is Obito Uchiha.

Obito’s power is described as being virtually limitless. While he didn’t make it into the top five among the most powerful Naruto characters of all time, he does come in here among the villains on the show.

Leading into our top three most powerful Naruto villains of all time we have Pain!

Pain’s Fandom from the Naruto Wiki describes his power level and leads into our number two spot extremely well with: “Nagato’s position as the leader of Akatsuki was well-deserved, being regarded as its most powerful member. Despite his fragile state and damaged legs, Kabuto Yakushi regarded Nagato as his second most powerful reincarnated shinobi, second only to an enhanced Madara Uchiha.”

Kabuto, who we’ll see mentioned in the honorable mentions (runner-ups) regarded Pain as the second most powerful reincarnated shinobi behind none other than Madara Uchiha.

One source even listed Madara Uchiha as the strongest Naruto character of all time in terms of combat, not overall raw power – which should tell you just how strong of a character we’re dealing with.

Madara even came within our top ten most popular Naruto characters of all time as well – so I’m glad he was able to lead us into the end of our list of villains as our final Uchiha.

Coming in at number one among the most powerful Naruto villains of all time is Kaguya!

Kaguya was listed as our Most Powerful Naruto Character of All Time as well, so if you have read that list you obviously could have seen this one coming…

In that list I used a source to describe her power by stating: “The literal deus ex machina of the entire series, Kaguya, was the rabbit-demon puppet master pulling all the strings the whole time. The alien mother of the Sage of the Six Paths, it was Kaguya who first created and dispersed chakra. This gave her god-like powers, including flight, the ability to merge herself with nature, change environments, dimension-hopping, telepathy, chakra absorption, regeneration and the ability to create. In combat, she can use her bones as weapons and even a scratch from them will reduce a target to ash. She can shoot needles out of her hair and control its length and density.”

The Most Powerful Naruto Characters of All Time (Runner Ups):