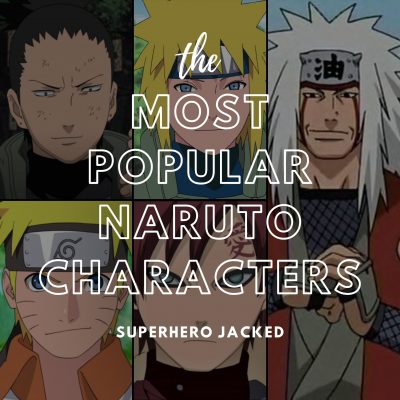 The Most Popular Naruto Characters of All Time are all over the place.

I pulled from all different polls and all different sources and each time the list was varied at least a few spots for a handful of characters.

That being said, I decided to finally take all the sources, all the polls, and all the votes that we’ve received with character request forms at SHJ and then find an average among the characters to make this list.

There’s almost no chance every single person will agree with the order of this list, but I do hope the actual fifteen characters I name are close to your personal top fifteen as well!

From what I saw from other lists, at least that stayed fairly the same – with the exception being the order.

We recently added out Naruto Inspired Workout Database as a mini-workout-database within our Anime Workouts Database – which is one of a few we now have among anime inspired workouts.

It joins other anime and shows like Dragon Ball Z, My Hero Academia and Avatar: The Last Airbender – but Jujutsu Kaisen, Demon Slayer and One Piece aren’t far behind them!

On top of these databases I’ve also been doing my best to prioritize awesome listicles like this one to make it easy for you guys to find the best character routines for you.

Alriught, but before I just keep hyping up how awesome our content is…let’s move into the actual list!

Starting us off at number fifteen among the most popular Naruto characters is Tsunade!

Tsunade didn’t make every popularity tier list, but she did make enough to warrant her a spot on our list.  She also kickstarts the list and joins two other female characters to help push this into a more diverse range for us!

Had Tsunade made her appearance in the series a bit earlier she may very way have gained a few spots on other lists – but I still prefer placing her here at fifteen instead of in an honorable mention slot!

At number fourteen among the most popular Naruto characters is a character that proves to us the importance of hard work and determination: Rock Lee.

I personally thought he was going to be much higher on this list – especially when I factored in the requests from The SHJ Army – but I suppose top fourteen with a list as good as this one is actually pretty good!

Coming in at number thirteen among the most popular Naruto characters, and our second female to join us thus far, is Sakura!

While researching this list I learned that many people either love or hate Sakura – or at least it seems that way.  She came in as the top fifteen most popular, BUT, a lot of Naruto fans weren’t happy about it, and voiced their opinions on the matter.

Sakura was with us from the beginning and had a ton of potential for a character arc, but unfortunately seemed to fizzle out a bit as the focus really moved into other characters like Naruto and Sasuke.

At number twelve among the most popular Naruto characters is our first of a handful from the Uchiha family: Obito!

There was so much build up and anticipation for us to uncover the background of the mysterious Obito, only to learn just how tragic it really was.  Obito not only became a big part of the overall Naruto narrative, but he was also vital in helping make Kakashi the teacher we know him as.

At number eleven among the most popular Naruto characters is a character that, from what I can tell, is loved by SO many Naruto fans.

The ironic part is that while I was doing the research for this list I was able to find some polls that have him in the top ten, and then others that just don’t even have him ranked at all!

The next Uchiha on our list, with still a couple more to come, and bringing us into the top ten most popular Naruto characters of all time is Madara Uchiha!

Moving into the top ten Naruto characters of all time onto number nine we have Naruto’s father and the fastest ninja of all time: Minato!

Minato, also called “Yellow Flash” was extremely hyped up, but he lived up to the hype with his powers, the big reveal of being Naruto’s father, and much more.

At number eight among the most popular Naruto characters of all time we have the hermit himself.

I personally love Jiraiya, and I was really happy to see that he made the top ten slot and is loved by so many other fans.  The fact that he is known as a hermit and a pervert and those are two of the top listed qualities of him on most sites that have a bio written up should just show you how light hearted he is.

I mean, c’mon, even Master Roshi is known as a pervert and he’s one of my favorite anime characters of all time.

At number seven on our list of the most popular Naruto characters is our final female character that will show up, but the frontrunner among them on the popularity polls!

Some lists have her named the best Waifu of all of Naruto, while others make note to the fact that she is one of the least criticized characters of the whole series and one that fans adore.

Coming in at number six among the most popular Naruto characters is one that I would have thought to be in the top fifteen but not quite so close to the top five: Shikamaru!

I personally see Shikamaru as one of the smartest ninjas out there, and definitely relatable when it comes to his laziness, but I also generally see the polls and requests trending towards the strong willed, highly motivated and super powerful characters.

Moving into our top five most popular Naruto characters of all time is one that I am super happy made it this high: Gaara!

Coming in with another heartbreaking backstory that builds up an extremely popular and developed character is Gaara’s overall arch and past.  Gaara could have easily gone over to the dark side after what he went through, but instead he made a complete flip and became one of the most loved characters on the entire show.

Moving into the top four most popular Naruto characters of all time you guys likely know the four we’re going to see by now – but the order is one that is actually pretty hard.

For the most part Sasuke and Kakashi came in at numbers three and four, but some lists even had Sasuke at number two, while other fans did not like him at all (which I was a bit surprised by).  As one of the main characters since the very beginning and one of the strongest shinobi in the entire series – I thought fans would all love him just as much as I do.

Coming in within the top three among the most popular Naruto characters of all time is our favorite teachers, leaders, and all around shinobis: Kakashi!

Kakashi, like many other Naruto characters in the series, has a sad backstory, and one that remains hidden for quite some time. Overcoming your past is definitely a big theme in Naruto, and Kakashi does that and then some.

Coming in at number two among the most popular Naruto characters of all time is the man himself: Naruto!

Naruto and Itachi go back and forth among the top two characters of all time on what feels like every other list I looked at.  There was no clear winner, but in the end I think Itachi was just slightly ahead of him. Naruto still remains one of the most inspiring and powerful anime characters of all time and he continues to inspire hundreds and hundreds of new SHJ Army members daily.

The most popular Naruto character of all time goes to Itachi Uchiha.

He’s not just loved within Naruto, he’s loved by everyone in the anime community.