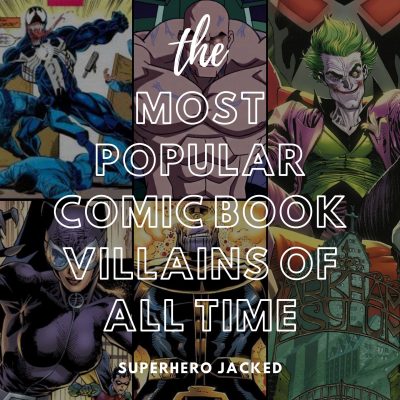 The original plan was to go from The Most Popular Superheroes of All Time into another anime themed listicle to break it up a bit.

But, when I sat down to start building my anime listicle I realized what I really want to be writing about is The Most Popular Villains of All Time!

These listicles started as a way to help members find workouts they may have forgotten about, missed, or just would have otherwise had a hard time finding within our Workout Database, but now they’ve grown into much more.

Oh, and don’t worry, we’ll be getting more articles and lists featuring all your favorite villains like this one!

For this list, though, I will not be using ANY of my own biased, and I also will not be taking into account anything to do with the characters workout routine we’ve built based on them or how effective I believe it is.

This is entirely based on research into user ratings and popularity of the characters.

Oh, and if you’re new here to SHJ, another awesome part of the listicles here is that not only are getting what you originally came for, but you’re also getting any workouts that we’ve built inspired by the characters of the list!

As always, leave your comments below if you were expecting other characters or even if you think this list is going to make some serious swaps now that MCU and DCEU are making such crazy moves!

MOST POPULAR VILLAINS OF ALL TIME

Black Adam’s popularity has skyrocketed due to Dwayne Johnson and Warner Bros hyping up the movie that is set to come out; before it even has an official release date!

That being said, Black Adam is one of the couple of characters we’ll find on this list (and honorable mentions) that have appeared as both villains and anti-heroes (or even sometimes heroes).

He’s insanely strong, badass, and I’m not surprised his popularity continues to go up.

I think Mysique would be on my own personal list of favorite villains of all time, but I’m not sure if she’d make the top ten.

That being said, with the popularity of the X-Men films and the performance by Jennifer Lawrence, Mystique’s popularity has blown up as well.  The strangest part is that not even Magneto was on the top ten (although he did usually come in shortly after within 10-15 range).

I expected Harley Quinn to easily make the top five most popular villains of all time, but I suppose eight isn’t that far off…

Harley does however come in as the number one most popular female villain of all time, which is definitely a big win; although Catwoman (which got pushed to honorable mentions) was in the lead for a LONG TIME prior to Harley’s big screen appearances.

I am so happy we have at least one non-Marvel/DC villain on our list, and it’s all thanks too our Amazon Series: The Boys!

For those of you who haven’t seen it: it’s definitely not your typical superhero show, but it is AMAZING.  It is so easy to hate Homelander, but that’s also what makes his character so dang popular.

I think Bane was a fan favorite among the most popular villains of all time even before Tom Hardy portrayed him in The Dark Knight Trilogy; but that obviously only helped boost his rankings!

Speaking of Tom Hardy, this isn’t the only character on the list he has portrayed among the top ten…the other is actually on the other side of the world coming in as a Marvel villain!

Lex Luthor is the newest villain we’ve drawn inspiration from to create a workout routine, but his popularity is one that has always been there.

He gained his powers from the Everyman Project, and although we haven’t seen a big appearance from him in the movies (other than if you count Jesse Eisenberg), his popularity is unscathed.

Here is Tom Hardy’s second character among the list of the most popular villains of all time!

Venom made an appearance in our original Spider-Man trilogy with Tobey McGuire, and now he even has his own film, with more set to follow.

With that being said, there’s a strong chance Venom’s popularity will only grow!

You had to know Thanos was coming in at the top three after how big Endgame was!  Not only was Josh Brolin’s performance incredible, but there were years of build up leading to the moment he finally had a larger time spent on screen.

Thanos was already a huge comic book favorite, but now that he’s had such an impact on the MCU his popularity within the top five most popular villains will likely be pretty strong for a while.

Loki is definitely within my top three favorite villains, and it seems like I’m finally in the majority and popular vote when it comes to one of these polls!

I am SO excited for Loki and Tom Hiddleston to have their own shown on Disney+ and I’m sure that will only bring Loki even more of the well deserved popularity among fans.

The man of the hour!  Whether you are in love with The Joker because of The Dark Knight Trilogy and the performance Heath Ledger gave us, how AMAZING he is as an overall character, or even the most recent insane performance by Joaquin Phoenix; there are a slew of reasons why The Joker is the most popular villain of all time.

The Joker is my favorite villain of all time, and the only thing I wish is that would could get him back in some kind of trilogy or sequence of films similar to the way we had Heath Ledger!

The Most Popular Comic Book Villains of All Time [Honorable Mentions]: