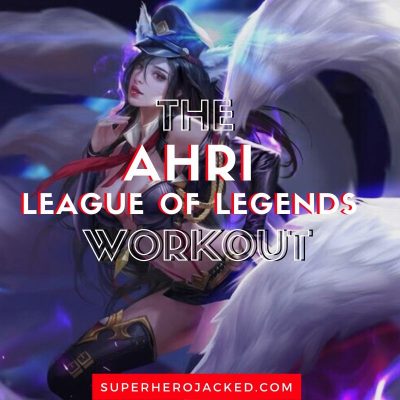 As I promised on Sett’s workout routine, we’re going to have more League of Legends themed workouts, contingent on how you guys like this week.

And this week’s female League of Legends character is Ahri’s workout!

I named a handful of other League of Legends characters on Sett’s article (both male and female), but if you guys have any of your own recommendations or suggestions please leave a comment below.

And while I mentioned Tracer’s workout in Sett’s article, we have actually seen quite a few Video Game Inspired Workout Routines here at SHJ; but hopefully this allows us to break into a whole new realm.

We actually saw Tracer in our Cosplay Workout Category, but I’ll be jumping in and out of that and our regular Character Workout Routines Category to scale the difficulty of the workouts accordingly (and decide when and when not to base it around physique and/or powers and abilities).

This height and weight is not actually from Ahri’s Wiki Fandom or LoL, but rather from a full concept list made by KestrelGirl on Reddit.

And the list is pretty awesome, so we’re using it! 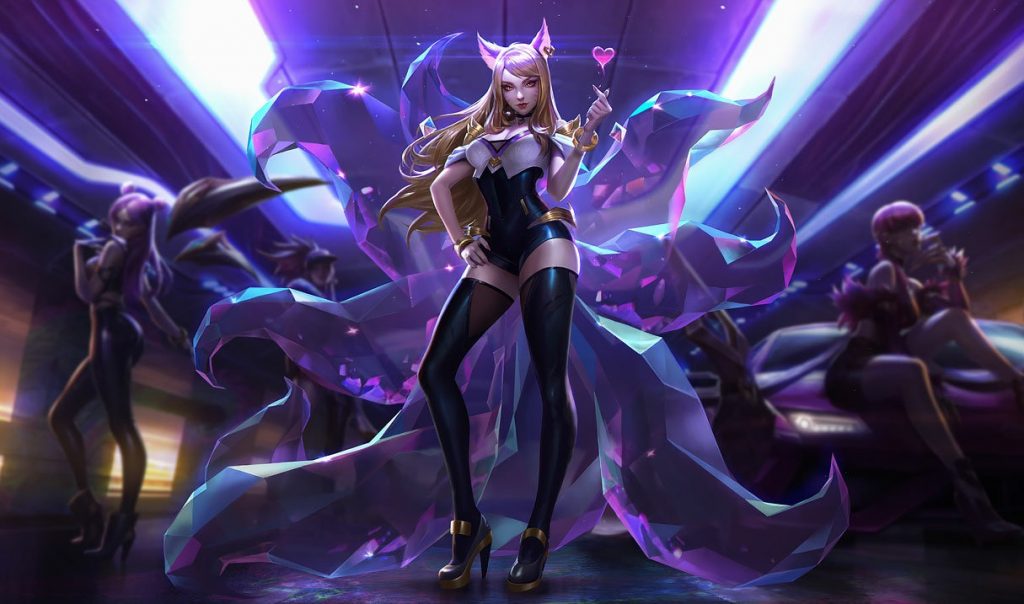 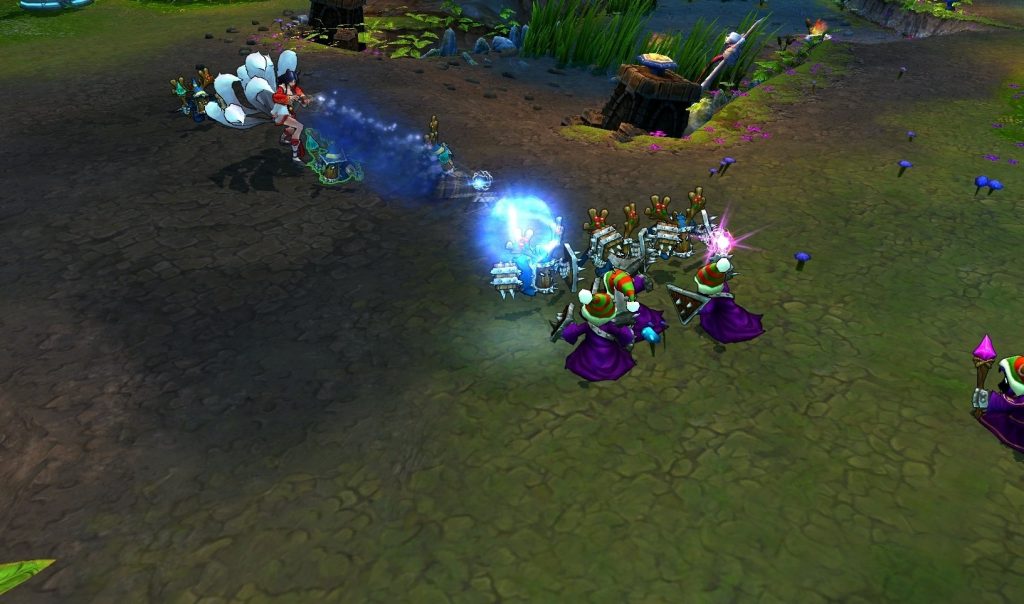 As I mentioned on Sett’s workout routine: the League of Legends Wiki Fandom is a cool place.

You get to check out tabs for Classic Champion Strengths, Abilities and Overall Power; and also tabs for TFT, and even Lore (which is what we’ll be using here).

Here’s what Ahri’s Wiki Fandom gives us as a brief bio in her Lore section:

Innately connected to the latent power of Runeterra, Ahri is a vastaya who can reshape magic into

orbs of raw energy. She revels in toying with her prey by manipulating their emotions before devouring their

life essence. Despite her predatory nature, Ahri retains a sense of empathy as she receives flashes of memory from each soul she consumes.

They continue into much more depth for her actual biography section, which they title as ‘The Nine-Tailed Fox”:

Abandoned in the snowy woods of northern Ionia, Ahri knew nothing of her original family save the token they left her: a pair of matching gemstones. She joined a pack of icefoxes as they stalked prey on their morning hunt, and before long they adopted her as one of their own. With no one to teach her the magic of her kind, Ahri instinctively learned to draw it from the world around her, shaping destructive

spheres and quickening her reflexes to take down prey. If she was close enough, she could even

soothe a deer into a state of tranquility, so much that it remained serene even as she sank her teeth into its flesh.

Ahri first encountered humans when a troop of foreign soldiers camped near her den. Their behaviors were strange to Ahri and, curious to learn more, she watched them from afar. She was especially drawn to a hunter who, unlike his wasteful companions, used every part of the animals he killed, reminding her of her fox family.

When the hunter was wounded by an arrow, Ahri felt his life seeping away. She instinctively devoured the essence leaving his body, and gained brief flashes of his memories – the lover he had lost in battle, his children from a strange land of iron and stone. She found she could push his emotions from fear to sorrow to joy, and charmed him with visions of a sun-soaked meadow as he died.

Euphoric at the rush of absorbing the hunter’s life, Ahri felt more alive than ever, and traveled Ionia in search of more victims. She relished toying with her prey, shifting their emotions before consuming their life essence. She alternated between dazzling them with visions of beauty, hallucinations of deep longing, and occasionally dreams colored by raw sorrow.

As you can tell: Ahri’s powers and abilities are mainly coming through her magic powers.

Generally speaking it’s harder to build a workout routine when that is the goal; which is why we would generally swap over to a cosplay oriented workout like, for example, Scarlet Witch’s Workout Routine.

So while I’m not going to be swapping the entire article into the cosplay section and making it a guide that also gives you suggestions on costumes, I will be focusing in on Ahri’s physique more-so then basing this one around her powers.

I named a few other female League of Legends Champions I’d love to have on the site, but Ahri definitely seems to be a fan-favorite for cosplay, so this one will be based around getting you the physique needed to jump into one of her skins!

For this one we’re mainly focusing on toning up and burning fat to get a physique like Ahri. Or, a physique that has you ready to jump into one of Ahri’s skins (or costumes, rather). For that reason I’m going to be giving you 3 days of training that focus in on Full Body, Upper Body and Lower Body, with a focus on core and glutes as well.  The other two days will be devoted to fat burning cardio, and it will be your choice how you complete it (I will share a handful of options).

3 Sets (Superset or Break in Between)

(20 Seconds On, 10 Seconds Off, Cycling Through Movements)

3 Sets (Superset or Break in Between) 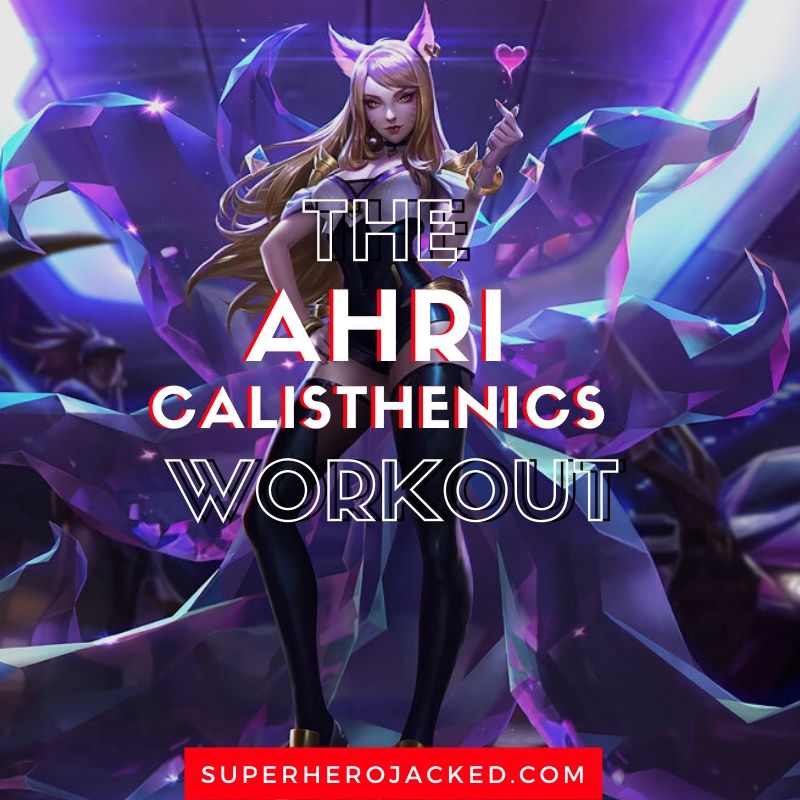 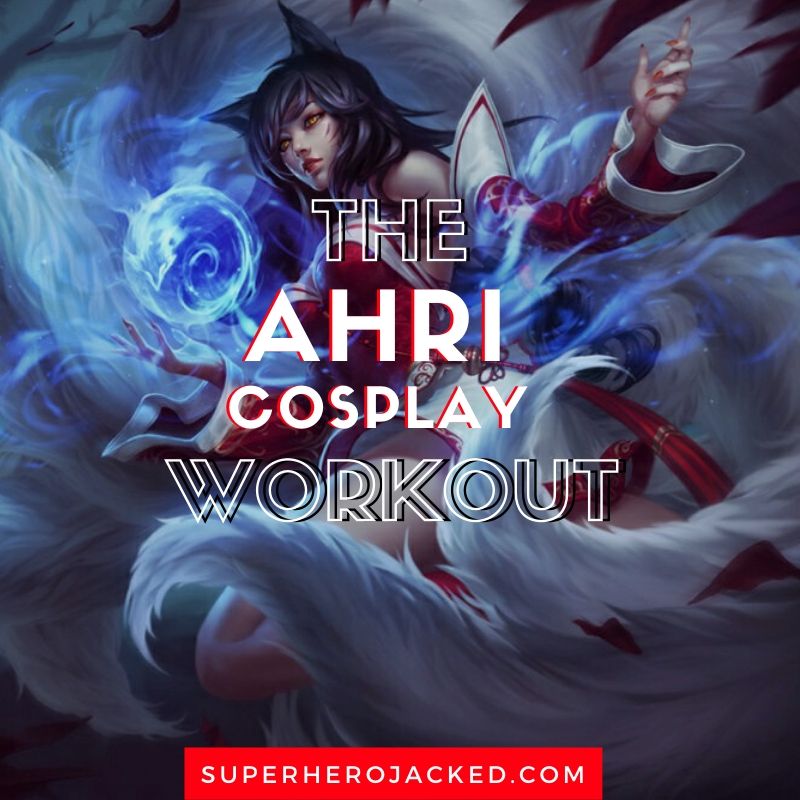