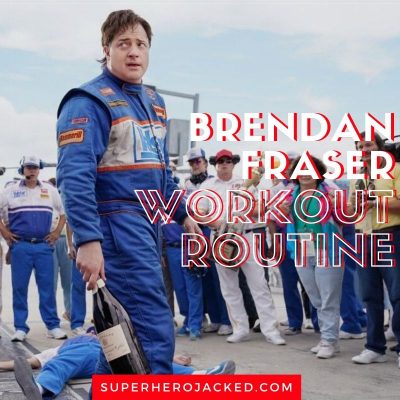 We have a new superhero in town….

Actually, we have a few, but we’re going to start with Brendan Fraser’s workout routine considering he is our Doom Patrol!

Let’s give him some credit, right?

Fraser went from George of the Jungle, The Mummy Trilogy, Gods and Monsters, Journey to the Center of The Earth and tons of other amazing roles to being what he described as blacklisted from Hollywood.

But now he’s back and better than ever as Doom Patrol with a fierce set of stars surrounding him!

So we’re going to take a blast from the past and look back at just how Fraser got into jungle-man shape!

Fraser is listed at around 210 lbs right now, but back in his George of the Jungle days he was probably closer to 150-160!

Which is fairly light considering he’s at the top end of the range amount average height males we’ve seen at SHJ; just nearly pushing into our tallest range. 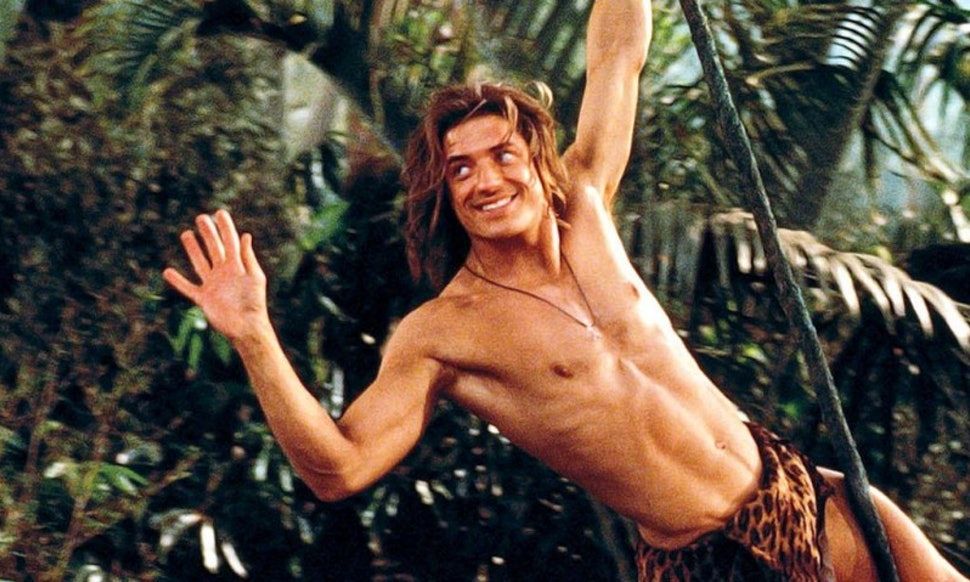 Brendan Fraser cut down to an extremely skinny and lean physique to swing around on vines as George of the Jungle.

Unfortunately for Fraser, he did not have all of the same information we have today back in 1998 when he was preparing to play George.

That being said, we do have information on what he did to obtain the physique!

The Morning Call shares this about his dietary information:

Fraser was determined to get in the best physical shape of his life. Before he began the movie, he went on a strict high-protein, low-carbohydrate diet. For six months, he worked out an hour a day with weights. By the end of filming, he had less than six percent body fat.

“I was a walking steak,” he says. “I knew George had to be as muscular as possible and, unfortunately, an anatomically correct muscle suit with a zipper in the back was out of the question.”

This actually seems most like our “Strict High Protein Diet” that I have researched to be most popular among male celebrities (over 300 celebrities researched and compiled all together in my book, Superhuman Secrets).

And while they tell us he trained for an hour a day with weights, we do have some extra information we’ll be sharing in his workout routine research section.

That being said, if you do want to replicate his low carb diet (which was probably done by eating a ton of chicken and steak considering his comment), the best way to do so would be to utilize our Superhuman Diet Class or our Eat Fat, Lose Fat Class inside our Academy.

Although, I recommend changing either of these up to be the most sustainable for YOU specifically. 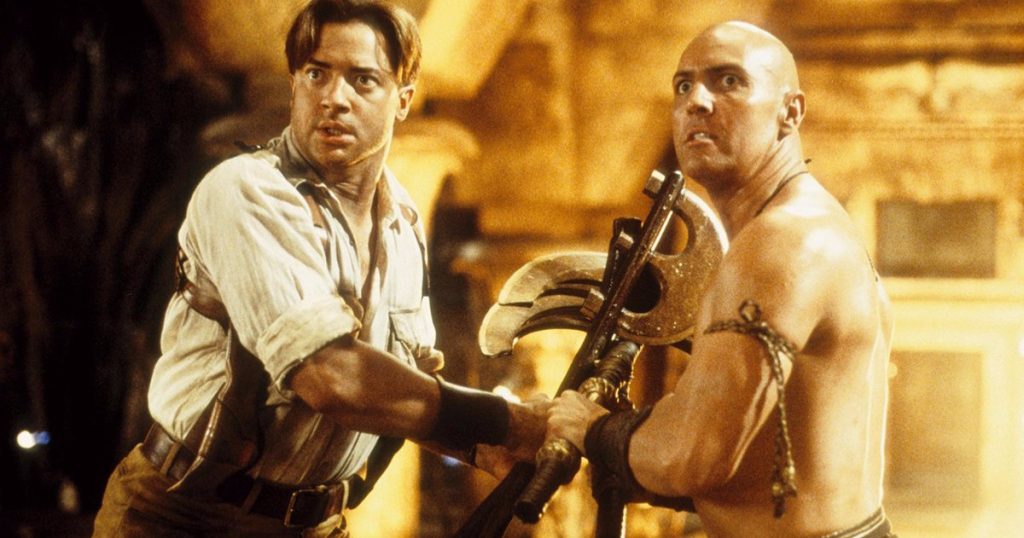 Brendan Fraser trained for several months prior to being ready for George of the Jungle, and then he kept that regime going to some extent to continue on into other roles like The Mummy, Journey to The Center of The Earth, Gods and Monsters, and more!

That being said, in our above sourced quote it mentions that he trained for an hour a day, but I do want to take a deeper dive into some more information from others sources.

Here’s what Independent has to tell us about his training:

Fraser went into strict training for several months before shooting began, and did a pumping iron session before every take to bring his muscles up to their chunky best. For the vine-swinging sequences he was supported by a mountain-climbing harness concealed in his loincloth: officially called a Swiss seat, it became more familiarly known, he admits with an embarrassed laugh, as a “butt flap”

Between his intense training protocol and doing his own stunts, Fraser tells GQ that he was put together with tape!

Here’s some quotes from what he refers to as “probably trying to hard”:

“I believe I probably was trying too hard, in a way that’s destructive,” Fraser said. “By the time I did the third Mummy picture in China [in 2008] I was put together with tape and ice — just, like, really nerdy and fetishy about ice packs. Screw-cap ice packs and downhill-mountain-biking pads, ’cause they’re small and light and they can fit under your clothes. I was building an exoskeleton for myself daily.”

And they continues with:

His injuries led to multiple surgeries, including a laminectomy, a back procedure to relieve pressure on the spinal cord or nerves. But, “the lumbar didn’t take, so they had to do it again a year later,” Fraser said.

It’s okay, though, we now have him back and better than ever as Doom Patrol.

But for those of you who were wondering what happened to Fraser, he also shares this:

Fraser said that his injuries were one of the many reasons he distanced himself from the spotlight, along with being sexually harassed by Philip Berk, a former president of the Hollywood Foreign Press Association [Berk denies the allegation], plus his divorce from actress Afton Smith and his mother’s death from cancer in 2016.

“Going to work — in between being in and out of those hospitals, that wasn’t always possible. So what I’m saying to you sounds, I hope, not like some sort of ‘Hey, I had a boo-boo. I needed to put a Band-Aid on it,’ but more of an account of the reality of what I was walking around in,” Fraser explained.

“I changed houses; I went through a divorce. Some kids were born. I mean, they were born, but they’re growing up. I was going through things that mold and shape you in ways that you’re not ready for until you go through them.”

Fraser is back at the gym, Daily Mail confirms with some pictures of him heading out, and doing great.

I also took it a step further and tried to get some specifics of Fraser’s apparent hour long sessions and aside from most sources making it seem like he was doing typical bodybuilding in conjunction with a more than extreme dietary regime, I was also able to find some information on his personal trainer.

Unfortunately, said personal trainer was apparently suing him for not giving him credit, and when I then researched his name he was a ghost with nothing to show.

So, dead end, but The LA Times does tell us: “The trainer who says he turned actor Brendan Fraser from flab to fab for the film “George of the Jungle” is suing the vine-swinging, tree-slamming star for allegedly cheating him out of a film credit.”, simply for those of you wondering why I didn’t dig deeper in the jungle for more specifics!

That being said, I do want to counter the “he worked out for an hour a day” comment from our earlier source and continue onto information from Irish Times, who has Fraser telling us something much different:

Given that he spends most of that movie wearing only a loincloth, Brendan Fraser underwent a rigid workout regime which burned off his body-fat and gave him the toned physique one would expect from any self-respecting, vine-swinging jungle king. “I had a routine that any athlete would have,” he says. “I did it for six to eight months – jumping, rolling, swinging, hiking, swimming all day long.”

So expect to not only see an hour in the gym, but also a ton of extra cardio added in!

For this one we’re going to be training with an old-school 5 day training regime which we saw Fraser using in one source (which we’ll shoot to complete within an hour or so as stated), and then combining it with different variations of athletic training cardio, which Fraser himself mentions taking part in.

If you cannot complete the designated cardio you can swap it out for 30-60 minutes of other variable cardio options that can be found within other workout routines within our Workout Database.

Wednesday: Back Day and Parkour

Whether this is at morning or night, it’s time to get out there and hike!

Start slow, but work your way up to 3+ miles of hiking if you want to get in George of the Jungle shape!

Again, this can be performed at any point in your training, although I’m sure many of you will do it right there in an accessible pool at your gym (if that exists).

For this one I recommend utilizing the swimming protocol we generally share right from Speedo!

For this one we have just the thing.  Choose from some of our parkour training options!

For this one we have just the thing.  Choose from some of our MMA training options!

For your running days I would recommend scaling up as best you can.

Here’s the formatting I would utilize: 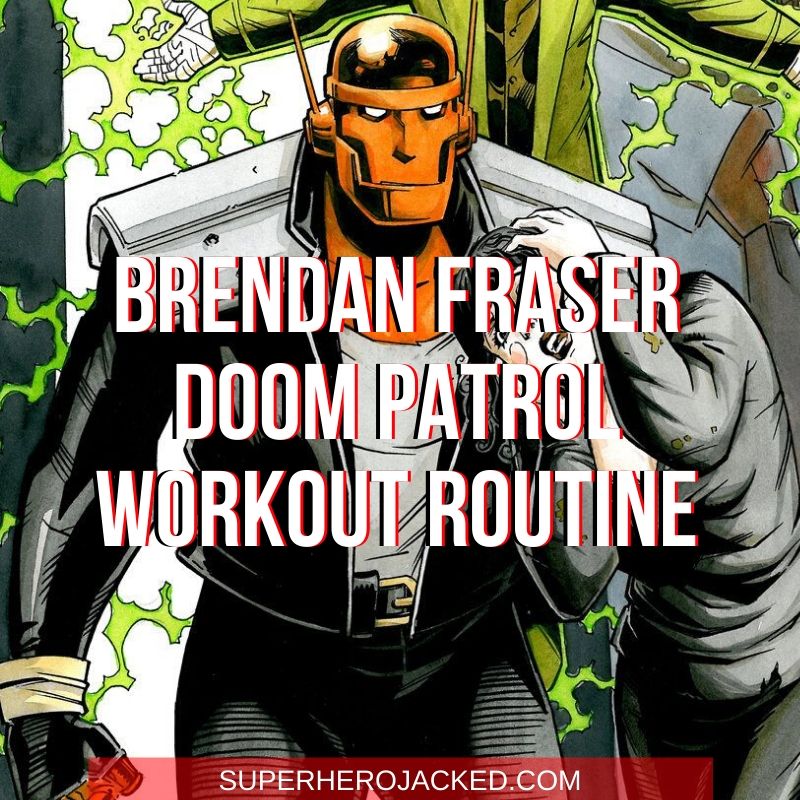 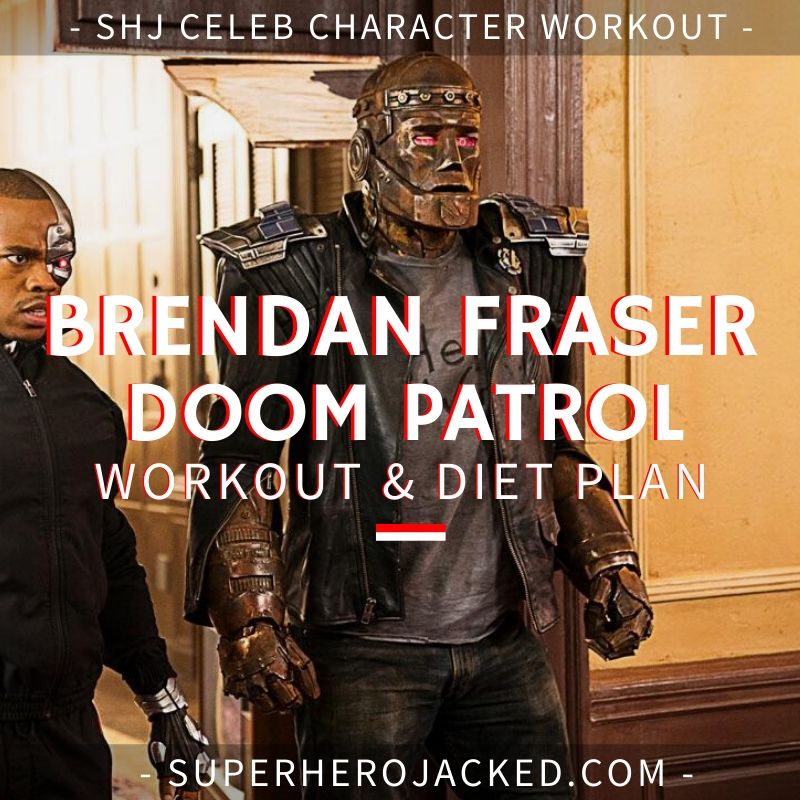 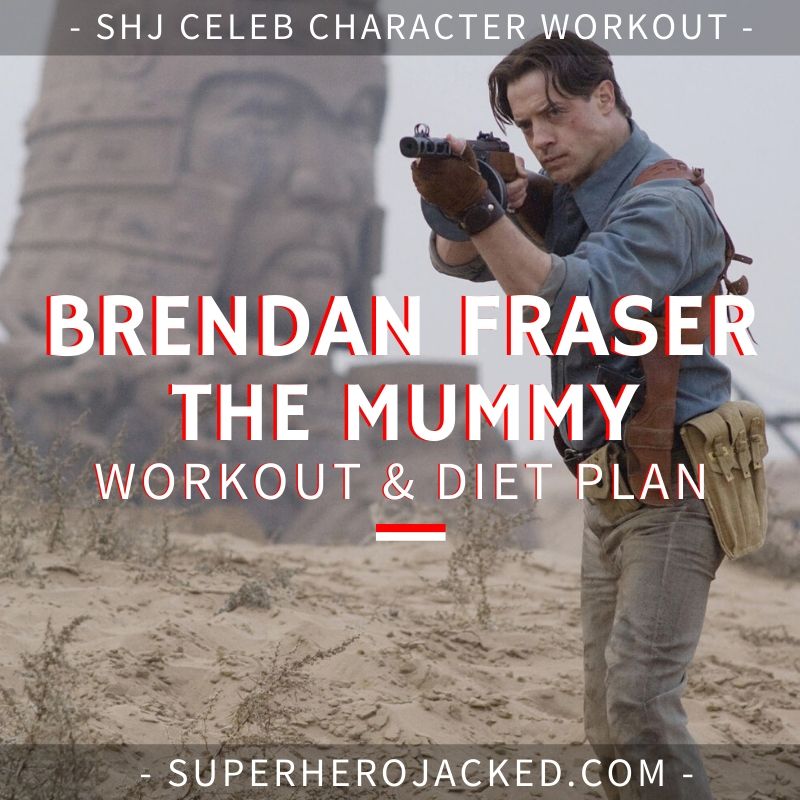 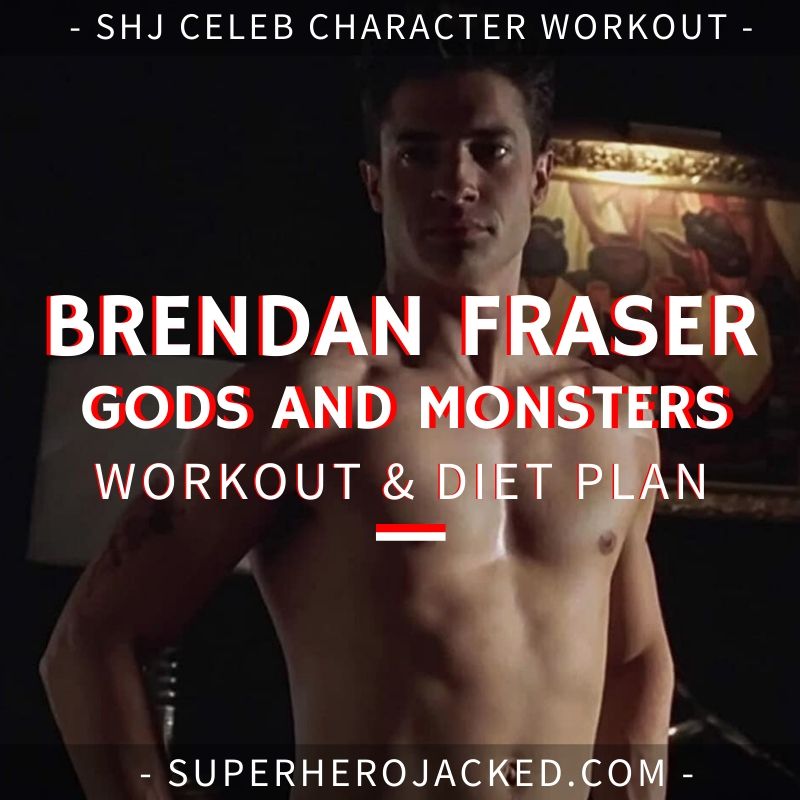 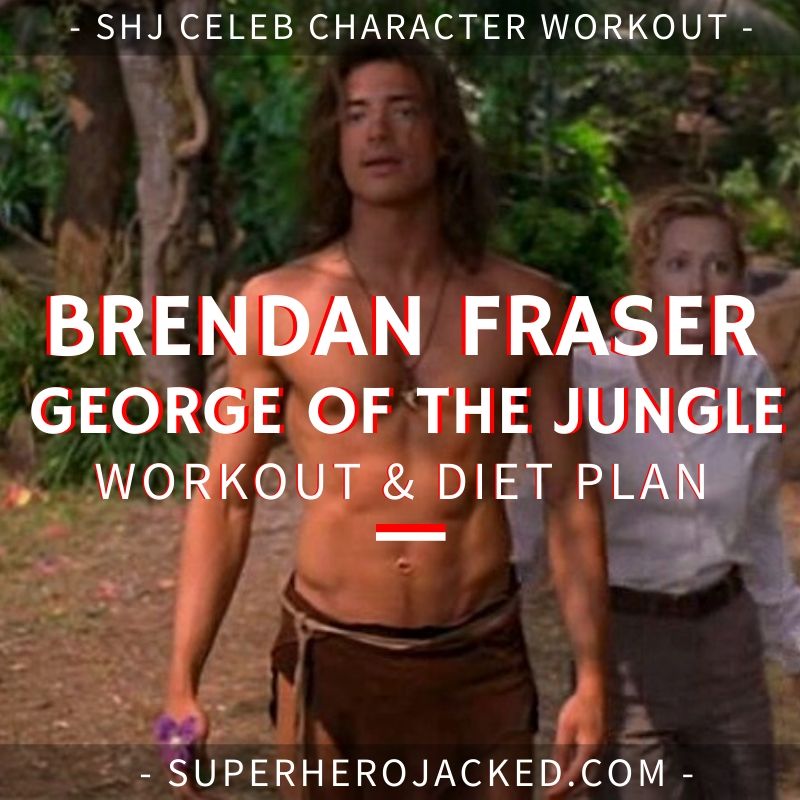 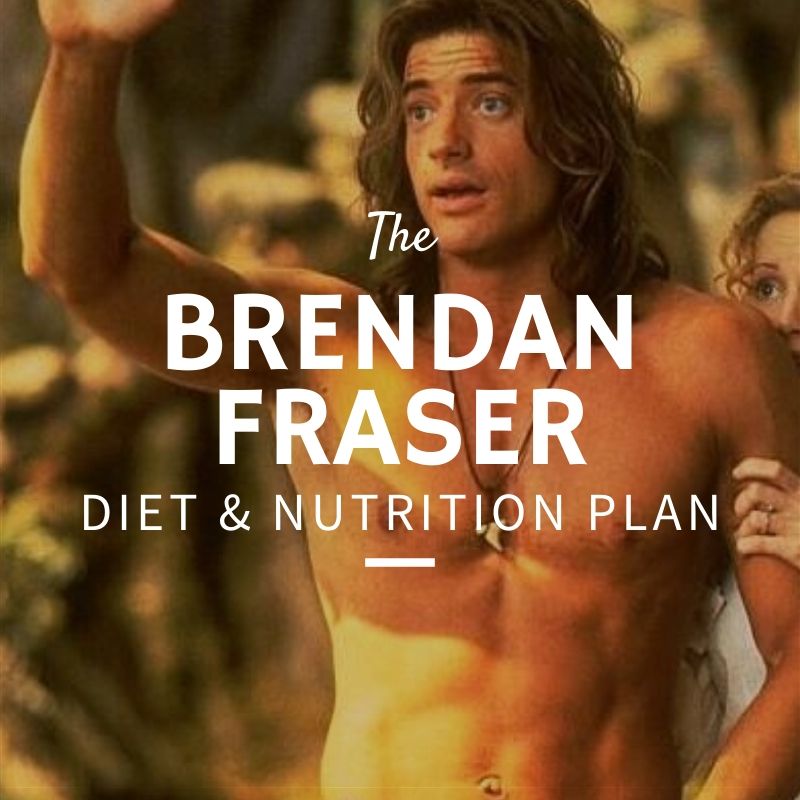