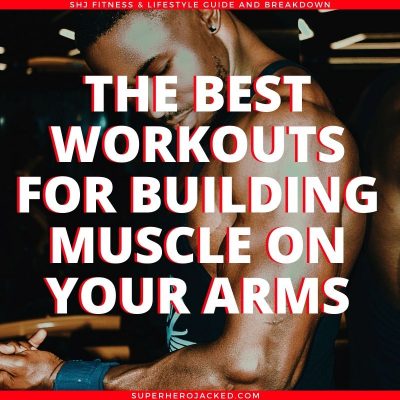 It’s time to grow our arms!

As you know our Workout Database is constantly expanding and we’re building off into new categories, such as singular circuits, new workouts and variations from celebrities we’ve already seen, their ab workouts, and even calisthenics workout.

Well, now the next thing on the list that The SHJ Army is asking for is biceps and triceps!

Instead of waiting weeks and weeks to build out enough workout routines that feature completely separated arm workouts, I decided to write an article that breaks down the workouts that include my favorite arm workouts into categories right here for you to mix and match with.

To be clear: that means you’ll be able to see exactly which female celebs, male celebs, characters, and even calisthenics workouts include my favorite arm training and then take from them and use their arm days!

These workouts will sometimes come in the form of push and pull days, and other times they may just strictly be referring to a workout that involves biceps and another that involves triceps as my favorites; where as there will also be a few that combine their training to be full blown “arm days”.

That being said: I do want to discuss how I’m building these mini lists and some other things you should know going into this.

How I’m Building The Lists

There you have it!

Those are the categories in which I’ll be building out our mini-listicles to make up our top workouts for building muscle on your arms!

Another thing you should be aware of is the fact that these workouts are mass building workouts AS A WHOLE, which means it’s also often a good idea to use the entire routine so that you have the benefit of the compound movements in conjunction with the accessory work.

We learned a bit about the difference between compound lifts and isolation movements in a recent article and we know isolation lifts are going to usually be what “isolates” our arms (both biceps and triceps), but the muscles in our arms are also being hit secondary in a lot of other lifts, which is why they are paired the way they are within these workouts.

Keep that in mind when jumping into your training!

Let’s get started with some of the top two workouts I suggest for building your arms:

Who other than the man himself to start us off with the top arm workout(s)?

Dwayne Johnson is MASSIVE, and his arms are too.

The Rock’s workout includes a six day split so if you decide to do the entire training protocol you’ll be hitting your arms throughout the week with all the other training and then you’ll also have your arm day that is specifically focused on isolating and hitting your bis and tris.

We’ve also seen a Dwayne Johnson Hercules Workout that we’ll be rehashing on the site soon, but his main workout that he shared as his “go-to” with sources is the one I linked to above and below, and the one I suggest to build some massive arms!

But this is your best place to start.

You can check out the Dwayne Johnson workout routine here.

Next up is All Might’s Workout Routine!

I thought about sharing Black Adam’s Workout as number two just to go with the Dwayne Johnson theme, but All Might’s workout is just too perfect to pass up.  He has a solo arm workout that will allow you to pull it out and use it in any other workout regime and the rest of his training program compliments it perfectly.

As you guys are likely aware, we build a lot of the Character Inspired Workout Routines within The Workout Database (including The Anime Inspired Workouts) around celebrity workouts that we have researched and discovered throughout the course of our hundreds and hundreds of celebrities researched, and you’ll likely see a lot of inspiration from The Rock and other workouts within All Might’s programming as well.

If you want to train with All Might and let your inner My Hero Academia fanboy (or fangirl) out while building some massive arms, then this is the next best program behind the high volume training that comes with The Rock’s above.

You can check out the All Might workout routine here.

And now it’s time for a couple calisthenics workout.

Gyms closed their doors all over the world and suddenly everyone in The SHJ Army was ready to pick up calisthenics workouts (well, duh).  Thankfully, when you have a Workout Database that’s pushing a thousand workouts, you’re well prepared.

BUT, we still make calisthenics workouts a priority, including our Ultimate Calisthenics Workout and Guide, which has helped hundreds and hundreds of members.

That being said, Stephen Amell’s initial training to transform into The Green Arrow was primarily calisthenics and parkour training. He stated that he is much more impressed by someone who can bang out 20+ pull ups than he is with someone who can rep 315 bench.

And, to some extent he has a point.  I mean we are talking about unleashing our inner superheroes, so part of that definitely feels more genuine when you’re using stuff like bodyweight and parkour.

When you check our Stephen Amell’s Workout Routine you’ll find that he actually is one of the handful of celebrities here on the site with TWO right there on his initial article (now we not only update old articles but we also just add more workouts to the site from celebrities we’ve already featured, including one I’ll be referring to below).  His first workout is where you want to be for this one.

Not only is it all calisthenics, but there is literally an ARM DAY within the calisthenics training!

You can check out the Stephen Amell calisthenics workout routine here.

Puck comes in at number four not only because I wanted to give you a character workout as our secondary calisthenics, and not only because I find him as one of the most badass and underrated Marvel characters, but also because his routine is freakin’ awesome!

For this one you’re not going to have a specific arm day that isolates and targets strictly your biceps and triceps, but you are going to have a calisthenics workout capable of building massive arms!

You’ll be using high volume dips, push-ups and other exercises to not only build massive arms, but also train you to work your way up to some advanced calisthenics movements.

Oh, and the best part?

Not only do you get a calisthenics workout capable of building up your arms, but it’s also mixed in with a powerlifting style workout routine to get you BIG like Puck.

Tack that on with the fact that another focus of the workout is to build your core in order to actually accomplish advanced calisthenics like we see from Puck in the comics and animated series, and you’re all set with massive arms AND a strong and shredded core (AKA six-pack abs)!

You can check out the Puck calisthenics workout routine here.

Have you ever seen Simone Missick’s arms?

Well, if not, you’re definitely missing out. Simone Missick stars as Misty Knight in Netflix and Marvel’s Luke Cage series and she came in ready for a superhero show!

While this one doesn’t have a specific “arm day” like Dwayne Johnson, All Might, Stephen Amell and our next male celebrity, this one was too good to pass up.

Ladies who want some toned arms, this is definitely where you want to be.

The program revolves around building muscle (not getting huge and “manly” as some women often fear) and toning and building up your arms a bit is definitely something that is going to come from it.

You can check out the Simone Missick workout routine here.

By now you guys should know I love sharing a bonus workout for our listicles.

This one is actually one of the newer workouts we’ve had on the site.  Recently, as I began mentioning above, we started hosting workouts from celebrities we’ve already featured on the site with updates to their training regime outside of their original article.

As you all know, if you’re already a member of The SHJ Army and know how all this works, celebrities’ workouts and training methods are constantly changing to better fit their goals and lifestyle changes.

Which means yours should be as well!

Alexander Skarsgard’s Tarzan physique is shredded and lean but the arm workout that he utilized to prepare for it is AWESOME and definitely one of my favorite arm days.

His is another great workout to pull his arm day from to use in another regime, or even pair with the entire Tarzan Workout to get a full week of massive arm training within the rest of the workout!

You can check out the Alexander Skarsgard Tarzan workout routine here.

Obviously if you’re looking for isolation exercises to build your arms you can go to almost any workout routine within The Workout Database and pull specific exercises from them, and there are TONS of other routines that give you more accessory workouts for massive arms that compliment a big physique.

We will continue to get more workouts for specific bodyparts separate from our original celebrity workouts like we have been with our celebrity ab workouts and celebrity circuit workouts, so keep an eye out for those listed with bicep and/or tricep workouts!

As always, remember that all these diets and routines should be paired with our Nutrition Pillars; you can even check out our article on The Top Diets Used Among Celebrities as well.