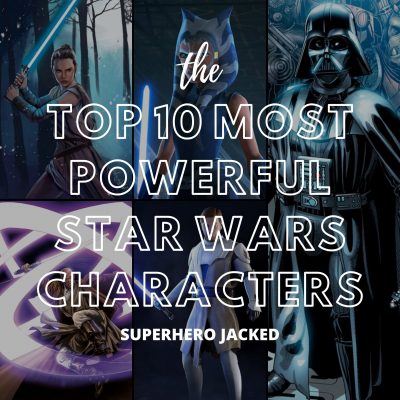 The Most Powerful Star Wars Characters have a lot of the familiar characters we’ve grown up with, with a few I’ve added from recent Star Wars films and series.

Star Wars was a big part of my childhood, and I really wanted to do this list justice and pattern it to other powerful lists you’ll find here on SHJ like The Most Popular Villains of All Time, Top Ten Most Powerful Superheroes with No Powers, Top 5 Physically Strongest Superheroes of All Time, and others we’ve already seen because I really love Star Wars (my saber collection can attest to that) and I had to whittle down my list and choose just ten characters.

Star Wars has given us many characters to both love and hate, and the fandom will always somewhat be divided on who gets the top slots in any ‘Most Powerful’ list from the saga. On that note, I had to do a bit of research and get rankings from several websites to come up with this list.

The characters on the top ten deserve their slot, but keep in mind that their power levels and force abilities vary as some are seen at the peak of their power and some not.

However, before I go on about power levels and force abilities throughout the article (might have already done that), I do want to point out that while Star Wars is one of the most popular sci-fi sagas out there, not a lot of attention is given to the workouts the characters do. Although you can find some popular science fiction character workouts here on SHJ, it’s far from complete, and we will continue to add more workouts from other characters in the future – because you guys deserve that and much more.

Of course, we’ve also done a handful of “Most Powerful” and “Most Popular” for other sagas, comic book lore, and anime so if you’d like to check those out you can visit our other listicles here.

For this one, I scoured the internet and Wookieepedia (no not a typo, that’s really a thing) for help and almost every single list has a different ranking on who The Most Powerful Star Wars Characters are. So, I decided to compile them together and place each character in the slot they were more or less at most often as well as keeping the list to the top 10 most powerful in terms of Force ability and character development.

Leave your comments below on whether you agree with the list, or whether you feel other characters should have made it into the list!

Starting off our list of The Most Powerful Star Wars Characters of All Time we have the Sith Lord Darth Revan, the main protagonist of the Knights of the Old Republic game!

I mean, who wouldn’t want to be a hero of their own game?

Yeah, we all would. BUT, That’s not the only trick up Revan’s sleeve. One source writes this about his power level: “Revan is extremely powerful in the ways of the Force, masterful in combat with a lightsaber. He possesses high agility, speed, and strength boosted by the Force that he uses in his fighting style. Revan mostly uses one lightsaber, but wields two as dark Revan, both his red Sith one and his original purple one. Revan is also an extremely cunning and able military commander, an expert with his tactics and strategies”

Do you agree with Revan’s placement in the top ten or would you push him down to the honorable mentions and bring someone else up into his slot?

Coming in at number nine on the list of the most powerful Star Wars characters of all time is Jedi Master Mace Windu!

Windu coming in after Revan is fitting considering Windu is one of the oldest human Jedi Masters in the Jedi Order.

Mace Windu is one of the most powerful Jedi in the Jedi Order, and he also happens to be one of the oldest human Jedi Knights. Not only is he a Jedi Master, but he was able to stand toe-to-toe against Darth Sidius – even after him defeating several Masters.

And not surprisingly, we have a handful of other humans still left to see…

At number eight among the most powerful Star Wars characters of all time is a trio of Force users known as The Celestials (The Son, The Daughter, and The Father).

The Celestials are a trio of extremely Force-sensitive beings who have the ability to read the future and understand prophecies. They were introduced during the Mortis arc in Clone Wars. They all lived on Mortis, an ethereal realm within The Force.

The Celestials at SHJ:

Next up among our most powerful Star Wars characters of all time is Ahsoka Tano!

A fan-favorite – Ahsoka Tano was Anakin’s padawan at the beginning of the Clone Wars but left the Jedi Order later. She made an appearance in Star Wars Rebels when the group was fighting some Imperial Inquisitors. In The Mandalorian, we see she has grown into a powerful Jedi who helps those in need with her dual lightsabers.

Just missing the top five and coming in at number six among the most powerful Star Wars characters of all time is Jedi Master Obi-wan Kenobi.

A powerful Jedi Knight, Obi-wan was the Apprentice of Qui-Gon Jinn and the Master of Anakin Skywalker. He is an extremely skilled Jedi, defeating Darth Maul in The Phantom Menace, and holding his own against Count Dooku and General Grievous on multiple occasions throughout the Clone Wars.

Played by Ewan McGregor in the prequel movies, many fans have taken to McGregor’s portrayal as the definitive Obi-wan. While there isn’t an actual Obi-wan Inspired workout, SHJ does have an Ewan McGregor running routine.

Making it to the top five among the most powerful Star Wars characters of all time is our second Sith Lord – Darth Plagueis!

The Master of Darth Sidious, Darth Plagueis is a Sith Lord who was obsessed with unlocking the secrets of eternal life. He spent years researching midichlorians and nearly completed his research before being killed by his apprentice.

At number four among the most powerful Star Wars characters of all time, we move into a much-debated character from the sequel trilogy – Rey!

Rey is the granddaughter of Palpatine and the protagonist in the sequel trilogy. She was a scavenger before being found by BB-8 and the Rogue Stormtrooper FN-2187 or Finn. She proves her Force sensitivity by being drawn to Anakin’s saber. Later on, she trains to be a Jedi under the tutelage of Luke Skywalker and then Leia Solo, helping the Resistance defeat the First Order and restore peace to the galaxy.

Coming in and making the top three among the most powerful Star Wars characters of all time is our favorite green Jedi (literally- his skin is green) – Jedi Master Yoda!

The powerful Yoda has trained many Jedi over the course of his 900 years and served as a Grand Master in the Jedi Council. He trained Obi-wan and Luke Skywalker in the Force. His strength and skill is truly shown in the Attack of the Clones, when he faces off against Count Dooku, absorbs force lightning, and saves Anakin and Obi-wan!

I should make a point to say: Luke Skywalker is the most powerful human in the sequel saga.

The son of Anakin Skywalker – Luke became the last Jedi after the fall of the Empire. He formed a new Jedi Temple to train the next generation of Force users (including his sister, Leia). Later on, after the betrayal of Ben Solo to the Dark Side, he would become a recluse until a certain scavenger finds him and reunites him with his sister, Leia.

Coming in at number one among the most powerful Star Wars characters of all time is none other than the Sith Lord, Darth Vader!

Anakin Skywalker – The Chosen One – was a Jedi Knight of the Republic and the best pilot during the Clone Wars, until he turned towards the Dark Side and became the Sith Lord known as Darth Vader. Throughout the original trilogy, he spends his time trying to crush the Rebel scum and turn his son Luke to the Dark side to rule as father and son. Aww. Best Dad award goes to..?

Would you place Darth Vader at number one or does Luke give him a run for his money?

The Most Powerful Star Wars Characters of All Time (Runner Ups):