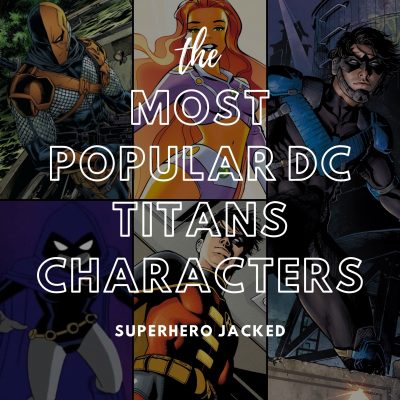 With the Season 3 release of DC Titans coming this August (which I know we are all excited about), it’s time we rank its Most Popular Characters!

Now, you might look at this list and ask why your favorite characters from Season 3 aren’t on here, but that’s because it hasn’t been released yet, so we are focusing on Seasons 1 & 2.

(Trust me, I would have loved to add Red Hood to this list if I had the chance!)

The characters on the top ten definitely deserve their slot, but I feel if we had more screen time for some of them, the rankings could have been different.

We have our DC Inspired Workouts in a mini-database within our larger Superhero Workouts Database like we’ve now been able to do for a handful of the most popular shows – and we also even just recently got our Justice League Workout Placement Quiz to help SHJ Army members find the best workout for them.

For this one we had to use some resources like Screen Rant and our own calculated opinions to form these rankings. In a series like Titans, where the characters become somewhat of a family, it’s hard to choose one favorite over another. But that’s why we gather information from other fans like yourself!

Starting off our list of The Most Popular DC Titans Characters we actually have two people: Hawk and Dove!

I mean, you can’t really split up a crime-fighting duo, can you? (cough cough) Dick Grayson

In either case, both Hawk and Dove are both founding members of the Titans; and they rejoin after Grayson decides its time for another chance at starting up. Hank and Dawn are like two sides to the same coin: Hank being wild, aggressive, and unpredictable; while Dawn is kind, calm, and nurturing. Even though their relationship ends for this reason, their love for each other is still strong, which allows them to still be able to work together.

Coming in at number nine on the list of the most popular DC Titans characters is Super Boy!

If Super Boy had more time to shine instead of being controlled by Cadmus, his rank would probably be better than number 9 (I mean, come on, he’s the half-son of Superman). Even with his limited free will, though, you are able to see what it’s like for a new superhero to struggle with the fact that the world isn’t as kind of a place as it should be.

Plus, do you see the bond between him and Krypto? Dogs truly are man’s (and Kryptonian’s) best friends!

At number eight among the most popular DC Titans characters is the badass assassin with daddy issues: Rose Wilson.

It was tough to decide what rank to give Rose, but in the end, it had to be number 8. A master manipulator, Rose was able to infiltrate the Titans for her father, Slade. Finding out that Rose was manipulating the Titans was sad, but it was all worth it when she chose the Titans over her father in the end. She was even able to get the bad boy, Jason Todd, to fall head over heels for her; which is no small feat.

Next up among our most popular DC Titans characters is Bruce Wayne’s bad apple: Robin!

Now this is a character that you can either love or hate, but it seems like most people love him. Known for his short-temper and impulsiveness, Jason is known to piss off a lot of the Titans; who in turn distance themselves from him. He does what he wants, and when he can’t, he gets mad. This eventually causes him to cut ties with the Titans and run away with Rose Wilson for a short time, until that doesn’t work out either. (I guess being the bad boy isn’t as glamorous as it sounds)

Just missing the top five and coming in at number six among the most popular DC Titans characters is Wonder Girl.

From the start, Donna Troy was a top choice for her emotional backstory with Garth a.k.a Aqualad. And even still, she became more popular as the series continued. She was known to even help Dick Grayson out when he needed some guidance. Being somewhat of a leader for the female superheroes of the Titans, she ultimately sacrificed her own life for Dove’s.

Making it to the top five among the most popular DC Titans characters is the shapeshifter: Beast Boy!

Garfield gained his number 5 spot for doing something that nobody else in this show was able to do; remain hopeful! Even after the Titans broke up for the SECOND time, Garfield decided to stay at Titans Tower and help anyway he could, knowing that if he gave up, there would be no hope left to reunite with his new family.

At number four among the most popular DC Titans characters is Raven!

Rachel received her rank for the growth that she made throughout the series. Coming a long way from the scared little girl she was in the first season of Titans, Rachel is now trying to get used to having people to call a family (besides her demonic father). It’s hard to do when her powers are still out of her control, but she tries her best. She really does grow a lot during the two seasons, though, as you can see with the new assortments of powers, which gives us a lot to like about her.

Coming in and making the top three among the most popular DC Titans characters is the big bad of season 2: Deathstroke!

Honestly, Slade Wilson has always, and will always be a badass character. You don’t mess with Deathstroke’s family and not expect to be hunted down for the rest of your life. Every hero needs a villain, and the Titan’s were unlucky enough to get Deathstroke as a villain since day one.

Coming in at number two among the most popular DC Titans characters is Starfire!

It only makes sense to see Kori at number 2 because of her role as “Team Mom”. Originally set out to kill Rachel, Kori instead became a sister/mother figure to her when she needed it most. And it definitely helped seeing how Rachel could have caused the destruction of not only the Titans, but the world!

Coming in at number one among the most popular DC Titans characters is Nightwing!

We all knew this was coming. Without Dick Grayson, there wouldn’t even be a Titans! The original Boy Wonder outgrew his adopted father’s shadow and decided to make a name for himself with his own team; stating he would be better than Bruce. But it’s never as easy as it looks, and Grayson found that out the hard way. Even through all the hardships he’s faced in his life, though, Dick Grayson never gave up, and was able to bring his family back together!

Would you place Dick Grayson at number one, or did someone else steal the show?