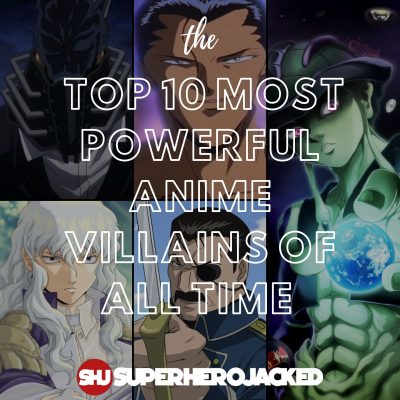 Anime has been around for decades, and with such a long tenure in the entertainment industry, there are bound to be many villains from different series that have proven their worth as the most powerful villains.

Because of this, we have our pick of the litter when it comes to choosing the most powerful villains of all time. Of course, we would do a longer list eventually, but for now, let’s start off with a taste of the power of evil.

Even though they’re bad guys, some of the characters on this list actually do have noble intentions, it’s just that sometimes, the ends just really don’t justify the means, and they are taken down either by the show’s protagonist and his friends, or de-powered and imprisoned left to ponder the error of their ways for all eternity. Okay, that last bit seems incredibly unfair, but they’re villains. And usually, as is the case in many shows, they almost always have a contingency plan to make an escape.

As I said we’ve already made a list for The Best Anime Villains of All Time so it was natural to delve into the most powerful this time around. We’ll take a look at different anime from current popular shows to shows that are from our youth (but still gosh-darn great) that have stood the test of time and become anime legends.

With any “Most Powerful” list, we have to look at the abilities of each character compared to others in the series, and also rank them in terms of overall power. So, here’s my take on the top 10 most powerful anime villains of all time. Stay tuned for the more comprehensive list coming in later weeks.

TOP 10 MOST POWERFUL ANIME VILLAINS OF ALL TIME

Coming in at number ten among our list of the most powerful anime villains of all time is Sosuke Aizen!

Sosuke Aizen is the former captain of the 5th division in the Gotei 13. He later leaves the Soul Society and wages war with
them using an army of Arrancar. However, he was defeated and was depowered and imprisoned for his crimes. What makes him powerful is his genius intellect, which allows him to use his other physical and spiritual abilities to great effect against any opponent. He is a powerful Kido spell caster, a master swordsman, and an unmatched hand-to-hand combatant. On top of that, he also has the ability to regenerate his body from any damage dealt by Ichigo’s Mugestu.

Next up, at number nine on our list of most powerful anime villains is Francis Scott Key Fitzgerald from Bungo Stray Dogs!

He is the leader of the American organization known as The Guild. He has the ability narcissistically known as The Great Fitzgerald, which allows him to grow more powerful the richer he becomes, which is nice considering he was already born filthy rich. While not outrightly a villain, he is simply willing to do whatever it takes to ensure his family’s happiness by bringing his daughter back to life. He has sworn to invade Yokohama to acquire The Book, which is foretold to have the incantation necessary to bring his daughter back to life and make his family whole again.

At number eight is the main antagonist in Yuyu Hakushu, Shinobu Sensui.

Known as the Black Angel, Shinobu is the main antagonist in YuYu Hakushu and was a former Spirit Detective in his youth. He had a very black and white view of the world and was virtuous to those whom he considered righteous and totally brutal to those who he believed to be evil. However, after he witnessed an event called the “Feast of Human Vices” wherein people sadistically murdered demons for their own pleasure, his mind snapped. He killed all the attendees without a thought, and he developed the alternate personality of Kazuya to justify the murders.

At number seven on our list of the most powerful anime villains, we have Blackbeard of One Piece!

Blackbeard is one of the two antagonists in One Piece. He is the archenemy of Monkey D. Luffy and is considered the evil counterpart of Whitebeard. He is a former member of Whitebeard’s crew but betrayed him by killing the rest of the crew and stealing the Yami Yami no Mi. He is the only one known to wield two Devil Fruit powers at the same time – Dark Dark Fruit and Tremor Tremor Fruit.

Number Six: All for One

Just missing the top five most powerful anime villains of all time is All for One.

My Hero Academia is one of the most popular anime right now, and we’d be remiss in including the hidden antagonist pulling the strings of the Villain Association and mentored Shigaraki. As his name suggests, All for One has the ability to assimilate multiple quirks for his own use in battle against the heroes of society – including the Symbol of Peace, All Might, the wielder of One
for All. He was almost defeated by All Might in the past and has since bid his time to ensure that when next they meet, he will be able to overpower the Symbol of Peace and fracture the society that has placed its trust in heroes.

All for One at SHJ:

All for One Inspired Workout Routine

Starting our top five most powerful anime villains of all time is Griffith from Berserk!

Griffith is the main antagonist of Berserk. He is the founder and leader of the mercenary group known as the Band of the Hawk. He fought in the 100-year war and brought peace to the nation of Midland. However, after being tortured, he used an eclipse to sacrifice his whole army to become the fifth and final member of the God Hand. Even when he was a human, he was very power-hungry and opportunistic, betraying his allies to achieve his own ends.

Next up, coming in as one of our most powerful anime villains of all time is one of the main antagonists from Fullmetal Alchemist, King Bradley!

King Bradley is one of the primary antagonists in Fullmetal Alchemist and is one of the seven Homunculi. He is also the original Fuhrer of Amestris. Because of his exposure to the Philosopher’s Stone, Bradley was gifted with enhanced strength, speed, reflexes, stamina, durability, and senses. He also possesses the Ultimate Eye, giving him some short-term precognition, allowing him to anticipate any opponents’ moves before they do them, and evade or counterattack them.

Coming in within the top three most powerful anime villains of all time is the legendary leader of the Uchiha clan, Madara!

Madara is the legendary leader of the Uchiha clan. He was one of the most powerful shinobi in history, recognized for his skills and proficiency decades after his death. He is the only one history remembers as being capable of competing against
Hashirama Senju, a “God of Shinobi” and being able to push him to his absolute limit. He is the only member of the Uchiha clan to gain full mastery of Sharingan and all its uses.

Coming in at number two among the most powerful anime villains of all time is the ruler of Universe 7, King Frieza!

Frieza is an intergalactic tyrant who uses fear and intimidation to subjugate planets. He is the main antagonist in the Dragon Ball franchise and is by far the most powerful villain on the show. He cares little about the well-being of anyone but himself, as shown by him slaughtering his men by blowing up Planet Vegeta while his forces were still in the vicinity. He kills without remorse and has a superiority complex so big that he doesn’t enter into battle until it is completely necessary and he sees his forces have been decimated by his opponents.

Coming in at number one among the most powerful anime villains of all time is the King of the Chimera Ants, Meruem!

By far the most powerful character to date in Hunter x Hunter, he has the ability to absorb the power of other Nen users, such as what he did with Shaiapouf and Menthuthugyoupi. Aside from this ability, he is a powerful hand-to-hand combatant, unfathomable strength, speed, and reflexes, and has incredible pain tolerance. He once tore off his own arm without so much as a grimace. Furthermore, he has a super-intellect, as shown by him mastering several strategy board games simply by reading the rule books.

The Most Popular One Piece Characters (Runner Ups):