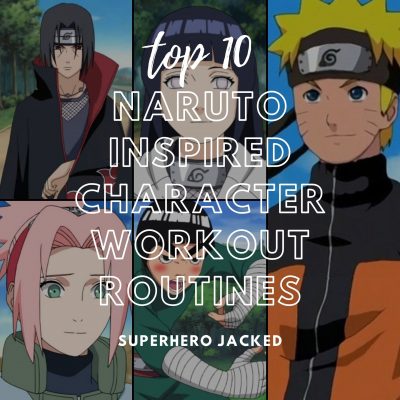 We finally have our Ten Naruto Inspired Workout Routines!

We have actually been slowly working our way to ten for what feels like a long time now.

We hit our Top Ten Dragon Ball Z Workouts and Top Ten My Hero Academia Workouts now, and even have enough Dragon Ball Z Inspired Workouts for them to have their own mini-database.

But, Naruto as a character has been extremely popular, as have some of the other characters on this list, but we just haven’t had the same amount of requests for more characters that we have for some

With some listicles we have here at SHJ I like to give specific reasons for the order I’m putting the workouts and/or characters in, but for the most part I discuss my specific selections below in my brief description.

Other than that, there’s no specific ordering to them outside the first two being the most popular among the entire SHJ Army, and also my own random selection based on what I know about the specific routines we built for each and what I think is most useful for you guys!

How do you now start off the Naruto Top 10 without Naruto?

We actually have our regular Naruto Workout Routine AND our Naruto Inspired Calisthenics Circuit you can utilize.

We even have a Benchmark Workout Routine inspired off his abilities and characters in our Superhuman System as well.

You can check out The Naruto Workout Routine here.

Next up on the list is a fan favorite among The SHJ Army.

Rock Lee’s workout was one of the most requested Naruto Inspired Workout Routines that we had come in, even competing with Naruto’s!

There’s 6 training days a week of high volume and even speed training to make this a super intense workout!

You can check out The Rock Lee Workout Routine here.

Sasuke is up next, and for good reason!

We have a lot of Uchiha workouts to go through, but we’re starting off with Sasuke.

He was requested even above his brother Itachi, although Itachi’s requests definitely sky-rocketed when it came to finalizing our top ten!

You can check out The Sasuke Workout Routine here.

Naruto characters make it easy for us to share female workouts being that their female characters are so badass as well.

Hinata Hyuga is Naruto’s wife, so this one doesn’t necessarily come in because it’s the best workout, but rather because I think it’s fitting to lead with her routine as our first, but definitely not our last, female on the list.

Her routine is fairly easy if scaled, but still a great workout.

You can check out the Hinata Hyuga Workout Routine here.

Next up on the list we have the leader of Team Seven.

This one was a fun one because it’s based off the training one of our past coaches inside The Academy utilizes for his MMA training.

If you want training that’s focused around mixed martial arts style then this might be the best bet for you among our Naruto routines.

You can check out the Kakashi Workout Routine here.

Number two among the females is Tsunade!

We follow a basic calisthenics routine that can easily be scaled and tack on some endurance and MMA training resources to round it out for you.

You can check out the Tsunade Workout Routine here.

Here’s one of the newest Naruto workout routines we’ve seen at SHJ.

I won’t spoil the second one that rounded out our top ten this week, but Itachi was the top requested male Naruto [that we didn’t already have] to help us hit our ten characters and make this list.

Itachi’s routine revolves around tri-sets for high intensity and calisthenics, but also pairs it with HIIT, jump rope workouts, and more.

You can check out the Itachi Uchiha Workout Routine here.

Back to the ladies!

It’s definitely different from other routines in that sense, but we do have a handful of calisthenics circuits that help you get toned and quick as well!

Overall the training style we built for her is very diverse and definitely a fun one for the ladies.

You can check out the Ino Yamanaka Workout Routine here.

The SHJ Army wanted more Naruto training, but a bit of a different take on it, so I thought what better way to do that than to bring Boruto into the action!

Trick question, there’s no better way to do that!

You can check out the Boruto Workout Routine here.

And now to finish off the list with Sakura!

Sakura was our most recent Naruto workout, helping us reach ten total workouts from Naruto characters this week with Itachi.

Her routine is scaled down a bit from Itachi’s tri-sets and revolves around supersets instead.

It’s a great routine if you’re looking to train in calisthenics while also utilizing movements that are very easy to scale when needed.

You can check out the Sakura Workout Routine here.

That’s a wrap on our Naruto characters.

Don’t forget to check out THE UZAMAKI Benchmark Workout inside The Superhuman System or Academy Premier.