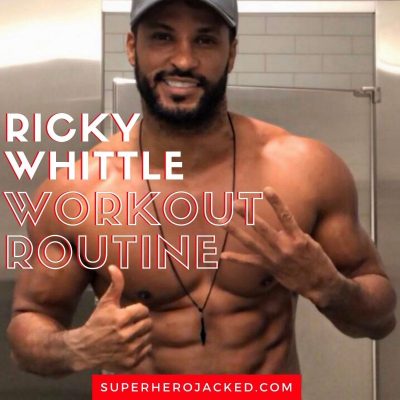 The workout featured there is actually Ricky Whittle’s HIATUS workout, which means it’s the one he shared that he does IN BETWEEN roles.

For this article we’ll be diving deeper into all the information about all his training, his nutrition, and more.

We want to know exactly how he gets shredded for roles like American Gods and The 100!

Spoiler Alert: In an interview for Men’s Health he actually said he walks around 20-30 lbs. lower than the weight he appears at in the show American God to portray his character Shadow Moon.

That means we have our work cut out for us!

Although his 215 lb. structure, which is 15-20 lbs. less than what he walks around at on American Gods, is a HEAVY 6’1 compared to other actors. 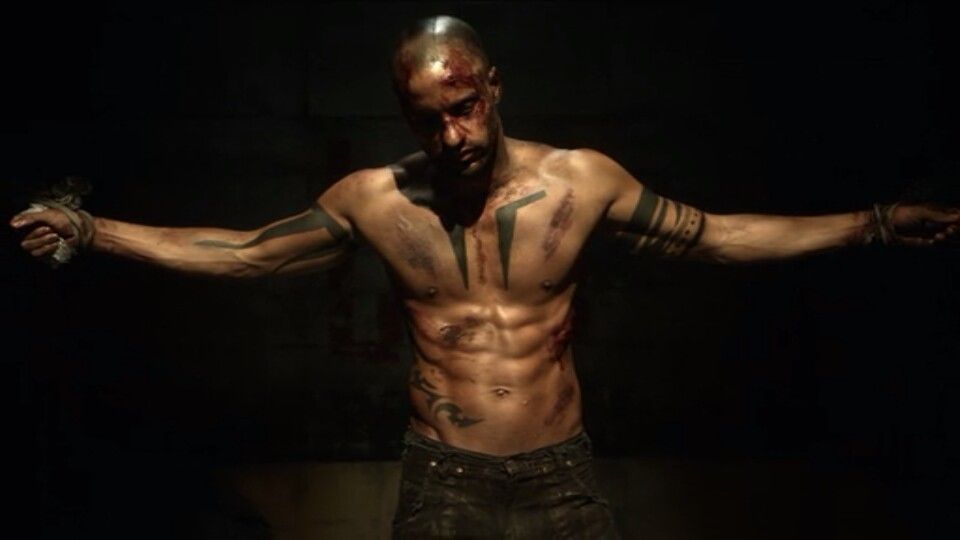 In the interview/video I mentioned above for Men’s Health Whittle mentions increasing his calories and following a high protein diet in order to tack on weight for his role in American Gods.

That sounds about right when compared to other celebrities and top performers we’ve seen (specifically males).

We talk about this in my book and our article The Top Diets Used Among Celebrities, and it’s one of the reasons protein is a core pillar within our SHJ Nutrition System (although with 3 specific science back and tested ranges to work with for sustainability).

And in an interview with GQ they tell us:

For the two months, Whittle trained for two to four hours a day and consumed 4,000 calories. His diet, as one would expect of someone engaging in the bulking cycle, consisted of protein shakes, protein snacks, protein and more protein.

“I’m a child. I love meat and candy but for a role I’ll do anything. In the beginning you find food, you eat it; you just need to stack up. But then I cut out sugar, sodium – the good stuff. Suddenly you’re not eating the chicken with sauce, it’s dry chicken with broccoli and brown rice.”

These are the strict diets we’ve seen some celebs like Kumail Nanjiani and Rob McElhenney talk about; although it’s not always like this!

In an interview with Mirror they confirm the 4,000 calorie range for Whittle’s bulking and have him stating:

“The first two weeks were fantastic so I ate candy, ice cream, pizzas, burgers, fries, whatever I wanted.”

But again he reverted back to stating that towards the end of the diet it becomes a bit less sustainable and tedious:

But once the weight was on all the tasty stuff was cut out and it was dry chicken, brown rice and broccoli and five protein shakes a day.

He said: “It became a chore after a while, it’s horrible. You eat because it’s time not because you’re hungry. You are always full.”

And just in case you’re a little iffy about the 4,000 calorie part, Men’s Journal even shares a direct quote from Whittle’s trainer, Jay Glazer:

“The diet was simple: No matter what, he had to get 4,000 calories,” says Glazer. “Loaded with protein of course.”

It seems Whittle is definitely able to sustain an incredible physique utilizing a high protein diet, it just begins to be more of a chore once he needs to keep the extra 30+ lbs. on WHILE being as shredded as he normally is as his regular 185 lbs. 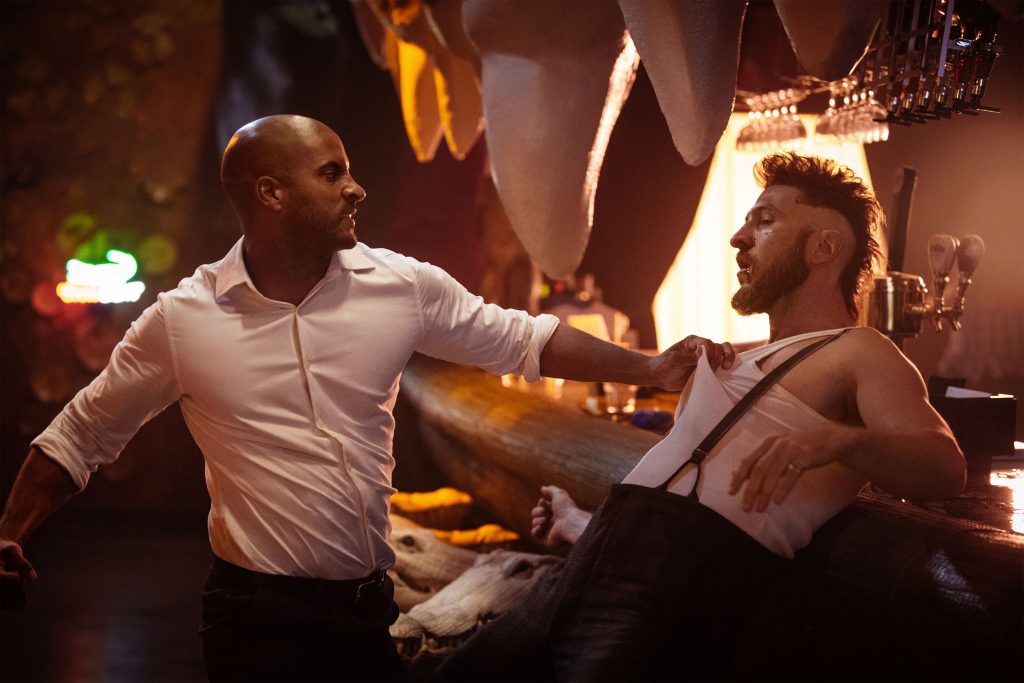 Leading with Men’s Health and making our way back through the list of sources that were easily compiled for Ricky Whittle (considering so many people want to know just how he gets so jacked), he stated:

“Shadow Moon, when I’m filming, sits at around 215 lbs., which is about 30+ lbs. above my natural bodyweight.  That involves a lot of heavy lifting, long rest in between sets, a lot of calories and a high protein diet.”

With that he flips us to him doing some heavy leg press, but also some advanced calisthenics movements.

So keep that in mind for when we get to his full workout below.

In an interview with Muscle and Fitness he sums up the experience [bulking] by stating:

I had to gain 30 lbs of muscle for my role as Shadow Moon in American Gods. Before the show, my job for two months was basically to eat and work out. I trained for two to four hours a day doing a lot of explosive exercises and lifting massive amounts of weight. I also did a little sparring and Muay Thai. At first I ate anything I wanted—burgers, pizzas, etc. But then I had to shape all that extra weight, so I cut back on carbs, sugar, and sodium, and focused on cleaner choices.

Yes, you read that right.

He said he trained for two to four hours a day….!!!

Jumping back over to his interview with GQ they tell us:

Immediately after casting, he was sent to Unbreakable Gym in LA where he embarked on a heavy-load bulking plan to increase his size in the two months prior to filming. Whittle smirks as he recalls his initial visit, “this is a gym frequented by NFL players in their off-season, UFC Champions and just beasts of the game. Sylvester Stallone is training there at the moment!” he exclaims.

It’s safe to say he was taking this pretty seriously.

We’re going to go ahead and put this one right under the “Massive Superhero” Body Type Goal choice inside our Academy.

Men’s Journal is where the bulk of our routine building is going to come from in conjunction with what Whittle stated in his Men’s Health video:

“Ricky was set into a very slow-paced, heavy-load bulking plan,” Glazer says. The standard deadlifts, squats, and heavy bench were supplemented with weighted-vest exercises. On top of that, Whittle boxed three days a week, and even did Greco-Roman wrestling drills.

Glazer also finished off his interview with:

“Because we needed to get him right back into the gym the next day, the recovery was just as important as the workout,” Glazer says. “Every day he would use our Cryo Chamber. Every other day we had him use the Phoenix Thera-Lase Cold Laser Therapy system to help bring down inflammation.”

We won’t exactly have this, but I did want you to note the emphasis they put on recovery, especially knowing Whittle was using some crazy training volume!

So get ready to life HEAVY!

We’re going to be training with our standard compound movements as the base of our workout and then building around them with heavy lifting and weighted vest exercises like Glazer mentions with MJ.  We’ll also be adding in an optional 3 days of “active off days” consisting of boxing that I will add our MMA resources and workouts for.

Tuesday: Deadlift, Back and Biceps

Friday: Back Squats, Legs and Calves