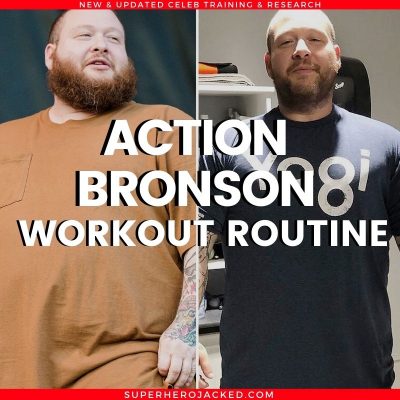 Alright, we’re sticking with the musician workouts and keeping our streak going another week.

In the past we’ve seen a good handful of musicians, but it was never really our number one focus compared to actors and actresses who showed off awesome transformations.

That being said, we have seen others like Adam Levine’s Workout, J-Lo’s Workout, Ariana Grande’s Workout, Nick Jonas’ Workout and even Demi Lovato’s Workout.

And in 2021 I plan on not only keeping the musicians workouts coming, but also expanding into more athletes to really grow our Workout Database!

*The number above is based on social shares, but he continues to lose more weight as his training and regime continues.*

Action Bronson is technically below average height when compared to the majority of celebrity males we’ve seen at SHJ.

But that’s cool, so am I, and he still falls into a range of some pretty awesome celebs. 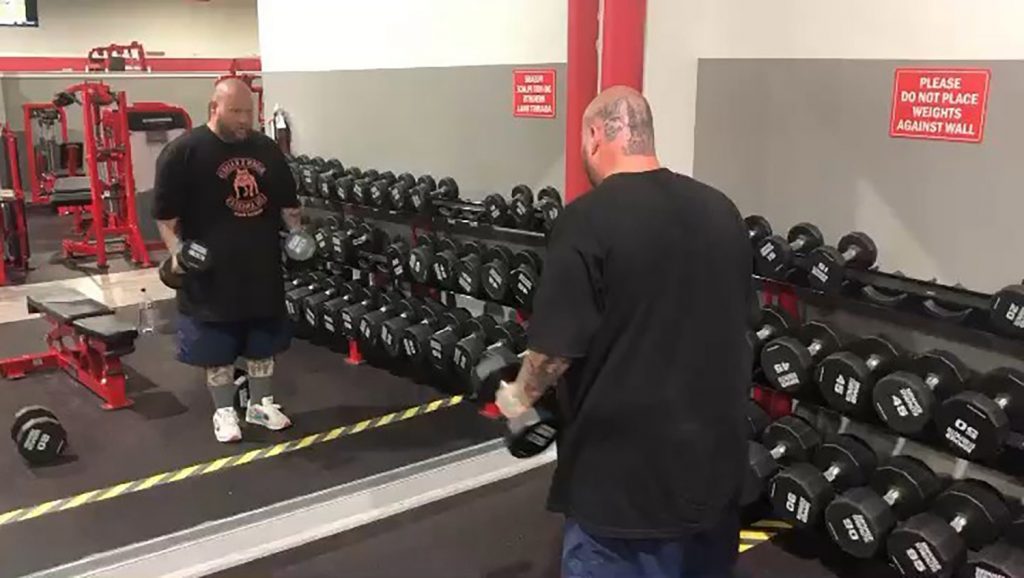 Action Bronson is a chef turned rapper, so this man knows how to cook himself a good meal!

Bronson has already lost about 125 pounds, and continues to change his life, which means, naturally, there has been a lot of coverage on how he did it!

In an interview with Men’s Health they tell us:

At his heaviest, the MC also known as Mr. Baklava was pushing 400 pounds. Now, thanks to an ambitious fitness regimen and an overhaul of his diet, he’s down 127 pounds since March. But becoming a healthier person has been a lifelong struggle.

“There was a lot of shit like prediabetes, eczema, asthma, all kinds of fucking dumb stuff that I had given myself,” he says. He struggled with portion control. “If I made something that was a big, round dish, I would eat the big, round dish. I wouldn’t just have one piece.”

It’s no secret that the biggest issue Bronson had with his weight was coming from his nutrition and love of food.

Men’s Health goes on to say:

One reason it’s taken so long to reach this moment is Bronson’s love affair with food. Before he was putting out songs with Chance the Rapper and A$AP Rocky, Bronson, born Ariyan Arslani, was a high school dropout from Flushing, Queens, who found purpose in the kitchen. Bronson attended culinary school, then worked as a chef around New York City. After breaking his leg in 2011 and being unable to work, he turned all his attention to making it as a rapper, releasing a series of well-received mixtapes and gaining props within the hip-hop community for his braggadocious delivery and proclivity for translating his impressive culinary vocabulary into bars. Rapping about food—”Shiraz,” “Brunch,” and “Jerk Chicken” are three tracks from his 2011 debut album—became something of an Action Bronson signature.

In a second interview with Men’s Health, Bronson states:

“Green juice is a beautiful thing,” he said. “Kale, celery, green apple, ginger, a little lemon. It’s one of the greatest things on earth, it’s lowered my cholesterol, it’s taken away chance of diabetic situations. I’ve lost like 80 fucking pounds, man. 80 pounds is a lot of weight… And I’m still fat, so like I said, it shows you I was a fat asshole. Right now I’m just an asshole.”

And, although I know we’re already working with a ton of information, I think there’s just so much awesomeness that comes from Bronson’s interviews, so I want to share some from GQ as well, where he states:

“It’s all diet, you have to just eat clean, no cheating, no bullshit, just eat clean. There’s no trick, you can make it taste as good as it can possibly taste. You gotta like vegetables, you gotta like clean things. Otherwise you’re just eating for nutrition, you’re not gonna find joy in it. But there’s ways. I’m eating lots of vegetables. If you’re gonna eat any type of carb, I like to eat wild rice. Lots of broccoli. Lots of things that are high in protein vegetable-wise. Just things that I like eating. I literally like every vegetable. So I’m just mixing it up as much as I can, trying to keep that low carb, keep that waist slim and trim. 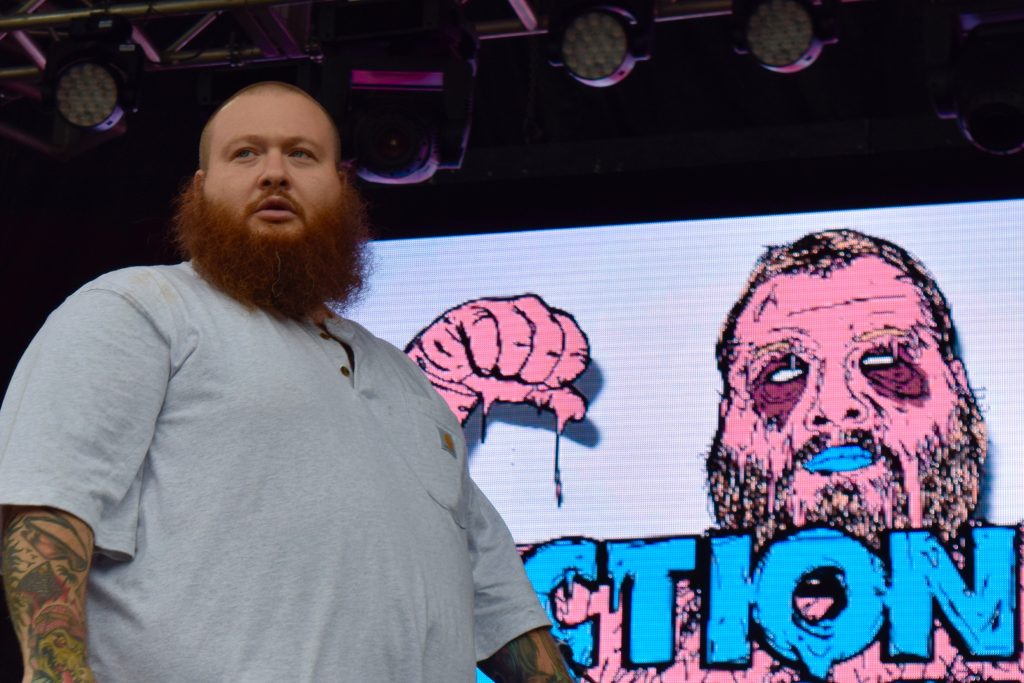 Bronson’s workout routine is almost as intense as his nutrition.

Bronson wakes up at 4:00 a.m. and starts his day with a protein shake. His breakfast is consistent: two eggs, three egg whites, one piece of sprouted rye bread, and an avocado. Then he drives a half hour to Impact Zone Fitness in Norwood, New Jersey. He boxes for 45 minutes, then gets into his sweat session with trainer Dave Paladino. “I’ve already got my work in while everyone else is snoozing,” Bronson says, “putting in big gains, big protein, you know?”

Bronson also did a video for Men’s Health’s YouTube Channel showing off a version of his training which Brandon then took to our SHJ YouTube to try himself!

You can check out the full Action Bronson workout video here.

We have that to work with, including multiple interviews with Men’s Health, TMZ and more.

His workouts are varied and extremely tough. For example, he followed up a 33-inch box jump with 100 100-pound kettlebell swings, T-bar deadlifts, a 445-pound trap-bar deadlift, 100 sumo squats, and then 100 “five-second” squats (which, we guess, means he does eccentric reps.) That’s just one workout. Bronson also channels his longtime passion for the sport of Strongman and hits up tire flips and farmer’s carries.

And he told TMZ:

“I run, I do my push-ups, I do a lot of cardio work,” he told the gossip site. “I juice a lot, drink green juice two times a day.”

But his workouts prove to be a lot more than that.

We’re going to break down the whole video interview he did with Men’s Health, but he also shared videos on his own Instagram and we see him doing these movements:

So while his routine may have started off with a ton of bodyweight movements and cardiovascular activity to drop the initial weight, Bronson has moved into a heavier and more typical strongman/weightlifting style of programming.

Bronson has shown from his training videos and in interviews that he has steadily progressed into a more typical weightlifting program.  He also mentions being a big fan of strongmen and heavy weights.  To work into his new style of training we’ll also be incorporating resources for mixed martial arts training (which he still utilizes), HIIT, endurance and more, which will be both mandatory and optional training to pick up the Action Bronson volume of training.

Tuesday: Heavy Back and Biceps

Bent Over Rows with Barbell

(Drop the weight after 8 reps, then repeat)