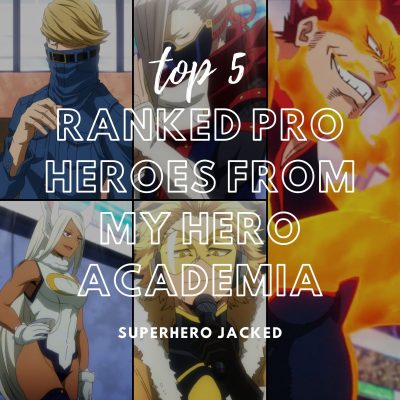 Our Workout Database is now over 1,000 strong and it can be a scary place for a new member of The SHJ Army.

That’s why not only do we have our listicles, but we also have tons of databases within our main database, like our Anime Workouts Database; which has been EXPLODING with new members flooding in on a daily basis.

And, if you’re one of those members: welcome!

One thing I’ve been trying my best to prioritize with these listicles are topics that I actually find myself typing into Google to search.

And those are just some of the listicles I’ve been slowly bringing to the site, all outside the actual workout listicles we’ve had show up in the past.

And so many more!

But, now it’s time for another really fun one I found myself typing into Google recently: The Top Ranked Pro Heroes in My Hero Academia!

Oh, and the coolest part?  We have workout routines inspired by SIX of the characters below.

But don’t forget to also check out our My Hero Academia Inspired Workout Database as well for the TONS of other characters we’ve featured on the site.

Mirko is not only the top ranked female hero and character in My Hero Academia, but she is also one of the most fun to write a workout around on this list due to her specific Quirk that makes her incredibly strong!

Of course we have a lot of other MHA heroes with enhanced strength, but it’s always nice to have a female character come in and allow me to write a routine that involves some heavier lifting; especially one with emphasis on the lower body!

You know…like a Rabbit would need!?

You can check out the Mirko Inspired Workout here.

Edgeshot doesn’t have a Quirk that allows us to specifically build a workout around it THAT easily, but the fact that he is extremely quick and maneuvers like crazy around his targets to whip himself into his abilities made it an easy decision to program this around agility, parkour and some endurance.

If you’re looking for 3 days of actual super high quality, effective but also high volume training, then this is the workout for you.

You can check out the Edgeshot Inspired Workout here.

Best Jeanist is super tall and slender, so training around his physique and body style is one thing, but his Quirk: Fiber Master didn’t really help us much while building out his routine.  Thankfully, like the rest of our pro heroes he has trained up in tons of other ways outside of just being able to use his Quirk.

For that reason I built Best Jeanist’s routine around his aesthetic as a character and in a way that fit hero training overall in order to be in the top five ranked pro heroes in all of MHA!

You can check out the Best Jeanist Inspired Workout here.

Hawks was an extremely fun character to build a workout around.  While at first glance it seems like it may be hard due to the fact that a lot of his fighting style revolves around fighting, it actually was quite obvious that we needed to revolve around agility, strength, and even a ton of intensity.

So while Best Jeanist and Edgeshot were able to roll with 3-5 days per week using some parkour addons, Hawks has 5 days of programming and it’s your job to step it up a notch even after that!

You can check out the Hawks Inspired Workout here.

Endeavor uses his Quirk: Hellflame in order to dominate the hero scene.  That being said, it is DEFINITELY not the only reason he is the number one ranked hero.  He is also insanely powerful when it comes to strength, durability and stamina – which made writing a routine around his extremely fun.

This is the first workout on the list other than Mirko that I was able to write a routine around really becoming more powerful and strong as a main focus!

You can check out the Endeavor Inspired Workout here.

Quirk: One For All (Formerly)

I should start by saying this: All of the above hero ranks are contingent on the fact that we’re discussing the rankings AFTER All Might’s retirement.  All Might was the number one hero for a LONG time before retiring and pushing every single one of the above characters up one slot.

With that, I wrote his routine based around him at his strongest, which is EASILY my favorite out of every single workout on this list.

I was able to build it to become one of the most well rounded characters you can be with power/strength, endurance, speed, and everything we need to put overall performance level front and center as the priority.

You can check out the All Might Inspired Workout here.

Again, don’t forget to check out the rest of The Anime Workouts Database and even our newest mini database devoted to our My Hero Academia Inspired Workouts!