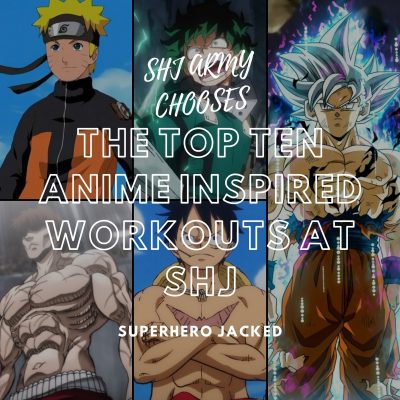 There’s no denying it.

Our request form is flooded with anime characters every single day, and it’s an endless list for us to tackle for you all!

Recently I’ve been making mention to our “Top Character Workouts List among SHJ” more and more, so I wanted to be able to come back and re-evaluate some of the characters on this list.

This list is actually built on The SHJ Army’s choices in the sense that it’s based on the amount of downloads and people within The SHJ Army who are actually utilizing the character’s workouts.

So I’m going to be doing the same for this one as well.

That means instead of basing it on my own biased opinion I’ll be actually taking the exact 1-10 list right from your opinions and favorites based on usage!

I’ll also be combining the download stats between both our main site AND our Academy member downloads (especially because they have unlimited access to PDF downloads/workouts).

That being said: There were definitely some twists and turns on this list!

There are some characters that were CLEARLY favorites, and then there were others that really surprised me that I did not expect to make the list (as well as a few I was surprised did not make it)!

Deku’s workout routine has now surpassed Goku as the top anime inspired workout on all of Superhero Jacked!

For a LONG time Goku held the number one spot and now Deku’s training soared to the number one slot after YEARS, and bringing the entire My Hero Academia inspired programs with him.

We’ve now had our original Deku Workout, a Deku Inpired Circuit, and a Deku Calisthenics Workout here at SHJ.

On top of that, we also have our MIDORIYA Benchmark Hero Workout inside our Superhuman System.

So whichever variation of Deku training you choose to take on, all roads end with THE MIDORIYA Benchmark Workout Challenge!

You can check out the Deku Workout here.

Next up on the list is our reigning anime champion for YEARS!

Goku held the top spot among anime character inspired workouts at SHJ for what felt like forever and the amount of downloads that continue coming in (and therefore SHJ Army and Academy members utilizing his workout) made me feel like his place at the top was going to be impossible to overthrow.

That being said, Deku did eventually beat him, and My Hero Academia continues to compete for top slots with Dragon Ball Z Inspired Workouts!

But, like Deku we also have a ton of Goku inspired stuff here at SHJ with our original Goku Workout Routine, our Goku Inspired Circuit, our Goku Calisthenics Workout, and even a couple more related to Goku and DBZ.

Oh, and of course we have a Benchmark Hero Workout/Challenge within our Superhuman System which we refer to as THE KAKAROT!

You can check out the Goku Workout Routine here.

Spoiler alert: This is not the last My Hero Academia Inspired Workout you’ll see on this list.

All Might was the first My Hero Academia Inspired Workout I ever hosted at SHJ and the amount of positive feedback resulted in so many more; which proved to be a great decision.

He quickly soared to one of the top utilized character workouts, even making our first user choice listicle (that I mentioned above) after only being on the site for a few months!

And now here he is still holding his slot at the number three top downloaded and utilized Anime Inspired Workout we have.

If your goal is to bulk up and tack on massive amounts of mass: then this is the routine for you!

You can check out the All Might Workout Routine here.

Next up on the list is a character that actually has always surprised me with the amount of downloads he receives.

His workout has thousands and thousands of SHJ members utilizing it all over the world, and it has been super-popular ever since it was released.

I wrote it up after Netflix released their Baki show and I loved it, and now we even have our original Baki Workout Routine, a Baki Inspired Circuit and a Baki Calisthenics Workout.

Tack that on top of our Benchmark Hero Workout/Challenge inside The Superhuman System called THE GRAPPLER and you can kind of see a trend here among the favorite anime characters.

You can check out the Baki Workout Routine here.

The Saiyan Prince himself!

Vegeta went down a few slots because of My Hero Academia dominating the list with Deku and All Might, but he still comes in at the Top Five among anime characters!

We now have our original Vegeta Workout and a Vegeta Calisthenics Workout that both mirror Goku’s training with a few twists and turns to emulate the two characters differentiating styles and abilities.

You can check out the Vegeta Workout Routine here.

Did I mention that My Hero Academia and Dragon Ball Z are going to dominate this list?

I was personally expecting Shoto Todoroki to be in this slot, or one of the other many My Hero Academia Inspired Workouts we’ve had; but I also LOVE Bakugo.

You can check out the Bakugo Workout Routine here.

We’ll actually wrap up our DBZ and MHA domination of this list right here.

Broly is a Legendary Super Saiyan, and who doesn’t want to train like the massive overpowered villain!?

This was a fun workout to allow me to train similar to All Might’s style being that both characters are HUGE, but also overpowered in their own right with the addition of insane speed and overall well rounded abilities.

You can check out the Broly Workout Routine here.

Let’s bring in some Naruto characters, starting with the man himself!

I actually expected to see more Naruto fans flood to SHJ the way our DBZ and MHA fans did, but either way it’s great that we at least get to host a couple Naruto inspired character workouts here on this list.

A few more from the show and we’ll even be able to make a top ten list just from the characters there.

We’ve also had our original Naruto Workout Routine and also a Naruto Inspired Circuit; and the handful of Academy and Superhuman System members we do have made it apparent enough that we also needed our UZUMAKI Benchmark Hero Workout/Challenge as well; so that’s something for you to look forward to!

You can check out the Naruto Workout Routine here.

Back to back Naruto-themed workouts coming in with Sasuke at number nine on our list.

This one didn’t really surprise me because I know Sasuke is definitely a fan-favorite.

I actually originally expected both Naruto and Sasuke to be closer to the rest of the lists, as their workouts had the biggest drop off point among the entire list, from them onto our tenth on the list.

Either way, though, both workouts as effective as they were fun to write.

You can check out the Sasuke Workout Routine here.

I was actually really excited about this one!

I LOVE Jojo’s Bizarre Adventure and we have a few workouts inspired by the show here at SHJ, so having one make the list was huge.

So if you love JBA as much as I do, you actually have a few choices!

You can check out the Jonathan Joestar Workout Routine here.

I mean c’mon: you had to know I’d have some bonus workouts for you!

The next two workouts are inspired by anime characters that are fairly new here at SHJ, but two that I believe will quickly make it to the top!

Edward Elric is from Fullmetal Alchemist and is a character that I held off featuring at SHJ until I made sure that I finally made time for the show!

Then, once I had put some time into it I immediately needed to get a regime up at SHJ for him!

You can check out the Edward Elric Workout Routine here.

Levi Ackerman has the same allure to his style of training as characters like Batman and The Punisher for me.

He’s “powerless”, but his training is incredible and he’s widely known as the greatest soldier in all of Attack on Titan.

We’ve also seen Mikasa Ackerman’s Workout here at SHJ, but that one came a while ago with Levi finally hitting the site recently.

You can check out the Levi Ackerman Workout Routine here.

And there it is!

Oh, and if you do make your way into The Superhuman System, don’t forget to take on THE MIDORIYA, THE KAKAROT and more in our Benchmark Hero Workouts.