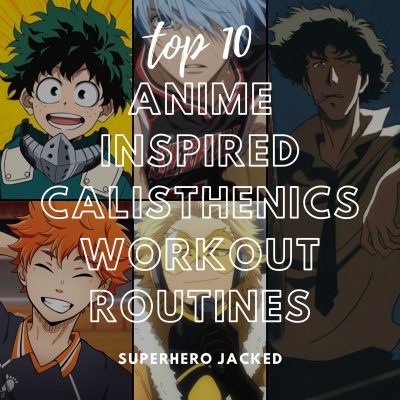 With our Anime Workout Database exploding among The SHJ Army we’ve been getting more and more characters who warrant calisthenics based routines.

That being said: these are not the only ones.

You can find more Calisthenics Workout Routines within their own database, they’ll just be mixed in with other calisthenics workouts from the other categories.

For this one I want to give you guys ten of my personal favorites ordered with my specific biased opinion on not only character and their popularity, but also the effectiveness or efficiency of the workout routine itself.

But, to break that down just a little more, here’s how I’m structuring it:

I should also make mention to the fact that there are a good handful of Avatar Workout Routines that I could add to this list as well (at least five of them), but considering they’re not ACTUALLY anime, I didn’t think it was fair.

But, because I know you guys love them, I will add them to the very bottom of this in order to give you guys some bonus workouts to work with instead of having to dig.

Just keep in mind their are definitely some hidden gems if you check out the full database that I linked to above, or even by going into our full Workout Database which is the most comprehensive list of celebrity researched and character inspired workouts on the entire internet.

Shoyo Hinata was the first anime character from a sports themed anime to ever land on the site!

He was a fun character to build a workout around being that he wasn’t a very typical character, coming from a background without powers and abilities like the majority of the others we see here at SHJ.

That being said, he made a perfect character to scale it back for and work around endurance, speed, and a good aesthetic utilizing calisthenics based training!

You can check out The Shoyo Hinata Workout here.

Hawks is the number two ranked hero in My Hero Academia, and he comes in second on our list towards the top slot.

As the number two hero you would think I would have issues making his routine based around calisthenics (similar to how All Might, Endevour and Mirko are all strength-based routines), but Hawks was actually perfect to build around speed and agility!

We combine calisthenics with high intensity training and some endurance work to land you at the number two slot as well!

You can check out The Hawks Workout here.

BUT, spoiler alert, Naruto is also on this list. So instead of having two Naruto characters take up the top of this list I decided they both must be penalized a bit and be moved down in order to fit them both and give some other shows some room! 🙂

That being said, I know you guys LOVE Itachi, so I couldn’t NOT include him for you. (You can also check out our Itachi Uchiha Jump Rope Inspired Workout)!

You can check out The Itachi Uchiha Workout here.

I joined The Fire Force party late, but as soon as I watched a few episodes I knew I needed to add him to SHJ.

Actually, I even was considering bringing Ogun Montgomery to the site soon as well!

You can check out The Shinra Kusakabe Workout here.

I am a Baki fanboy.

It’s not in my top three, but it’s SUPER close, and definitely makes top five anime every time.

And don’t worry, you’ll see my top two at the very end of this list….

But this Baki workout is extra-awesome (similar to the top two I mentioned) because this is one that I actually came back to write after already having our original Baki Workout Routine.  AND, we even had a Baki Inspired Circuit Workout as well; but I wanted to specifically give you guys a full weekly calisthenics one on top of that.

You can check out the Baki Calisthenics Workout here.

If you don’t love Hunter X Hunter then I don’t know what you’re doing wrong!

I made sure to make both Gon’s workout AND Killua’s workout calisthenics-based for you guys.

It also felt right considering the age range and style of character performance we’re working with.  But, you also can always go and jump into Isaac Netero’s workout which is weight training and strength based instead!

You can check out the Gon Workout here.

I know you guys already knew this one was coming, but technically I didn’t tell you which slot!

Naruto was one of our first ever anime characters and I still love the simplicity behind his routine.

There is so much room for changing it up, scaling, and even turning it into HIIT or other variations of supersets, circuit and straight sets, that it just makes so much sense for his character specifically.

You can check out the Naruto Workout here.

And now it’s time for some Attack On Titan!

But Levi’s base calisthenics workout, which is a full week of training, definitely deserves a top three slot!

You can check out the Green Arrow Inspired Jump Rope Workout here.

The top two were really tough to decide between, but I opted to put Deku at the number two slot!

My two favorite anime of all time are Dragon Ball Z and My Hero Academia, so this wasn’t easy when it came down to my biased opinion of the characters.

That being said: it also wasn’t easy being that both these routines are secondary routines built around calisthenics specifically after seeing the characters multiple times prior!

We have had our original Deku Workout Routine, a Deku Inspired Circuit Workout, and a Deku Jump Rope Inspired Workout, on top of the calisthenics workout I’m featuring here.

It’s safe to say that we really like Deku at SHJ….but also all of MHA, which is why we have our My Hero Academia Inspired Workout Database!

You can check out the Deku Workout here.

Similar to Deku, we’ve also seen a lot of Goku as well here at SHJ.

And, when it came down to it I had to admit that Goku is still my favorite anime character of all time.

It’s hard to give up on the character that you grew up watching and admiring for years and years!

You can check out the Flash Inspired Jump Rope Workout here.

That’s a wrap on our superhero inspired jump rope workouts that make up our Jump Rope Workout Database.