BONUS: Download the FREE Mulan Inspired Workout Routine PDF
For guidelines on how we write these programs please see our Disney Copyright information. 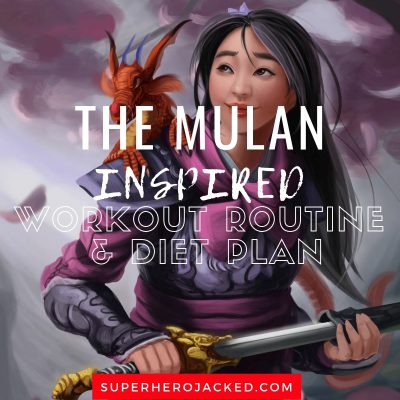 We started with a villain (Gaston) and now it’s time to see a real hero.

Mulan is one of my all time favorites.

Well, anyways, I’m really excited for this one regardless.

For the start of these articles I would like to say this: I linked to the guidelines above, but in no way is this workout and diet plan that of Mulan’s. This is simply a plan inspired by his character and I will be citing all the information I can in order to show where the inspiration is coming from.

So, for anyone who isn’t familiar with Mulan’s character, I’ll be talking about all the things you need to know as to why I’m building the routine the way I am.

Being that Mulan is the first female, we don’t have enough Disney Inspired characters to compare her to, so I’ll be naming other women we’ve seen below.

For Gaston I named characters, but I think for this one I want to show you where she falls in a range among women celebs we’ve seen.

There’s even a nice happy face made up of the two eggs and a strip of bacon.

So for this one you’re going to be utilizing not only the rice porridge (consisting of sushi rice, 2 eggs, and 1 strip of bacon), but also some other Chinese tradition food/drink as well:

And, obviously you can switch it up, but remember Mulan is being drawn from Hau Mulan who is a legendary Chinese warrior from the Northern and Southern dynasties period (420–589) of Chinese history, originally described in the Ballad of Mulan.

While we’re talking about Hau Mulan I’ll say one more thing about it, pulling it from the Wikipedia page:

In the ballad, Hua Mulan, disguised as a man, takes her aged father’s place in the army. Mulan fought for twelve years and gained high merit, but she refused any reward and retired to her hometown.

For those of us who know the story of Mulan in Disney format, it sounds a lot like our story.  Here’s a description of Mulan from her Wiki Fandom page:

She is the strong-willed and tenacious daughter of Fa Zhou, a war veteran. When her father is called back into battle, Mulan opts to protect him by taking his place under the guise of a male soldier named Ping.

Mulan is inspired by the legendary Hua Mulan from the Chinese poem The Ballad of Hua Mulan. She is the eighth official Disney Princess and one of the few who is not actually royalty through either birth or marriage.

I added in some extra information because if you’re here for Mulan, you’ll probably enjoy whatever I add about her…right?

Mulan may not be a superhero, but she sure as heck has some incredible abilities.

Here’s what the Wiki has to tell us about them:

Although Mulan possesses no magical or superhuman powers, she has military training courtesy of Shang.

I’d like to see her and Merida have a fun archery contest…maybe even on horseback!

If you go back and watch the Mulan training scene you’ll see she starts out by getting her butt kicked, but in the end triumphs and leads the pack not only in mixed martial arts but also in weighted bag carries (running ahead of the men), and climbing the pole to grab the arrow!

While I will be giving you some programs made for us by Coach Derek that will help with martial arts, these will not be specifically kung-fu, and will not contain training that will help you with your sword fighting.  For the sake of training purposes, the mixed martial arts programs will help you defend yourself and also burn calories while doing it – but if you want specifics that Mulan knows, you will likely have to search up some local classes!

I’ll be programming you everything we see from Mulan, and also including a calisthenics/training day that draws inspiration from her training scene.

Let’s get down to business.

On an average day Mulan was a farmer.  During her training Mulan woke up daily and began prepping for war as Ping.  For that reason we’re going to find a happy middle and train 3-5 days per week.

I will be programming you a full body workout routine that can be used 2-3 days per week, and the rest of your training will come from mixed martial arts programming, horse back riding, sword fighting, and archery.  I will list it all below.

**Instead of running with weight on back like Mulan**

As I mentioned, we don’t have Kung-Fu training or Sword Fighting Training Programs, which Mulan would utilize, but we do have mixed martial arts programming from our amazing Coach Derek inside The Academy.  Utilize these programs OR hit a local gym.

Mulan also trains in horseback riding, archery, and as I mentioned sword fighting.  She’s training for war as Ping.

For this reason, you will be required to also add in other forms of activity.  These can obviously (if you’re trying to REALLY become Mulan), be all of the above mentioned, or they can be broken into other formats of activity such as sports, hiking, yoga, pilates, etc.