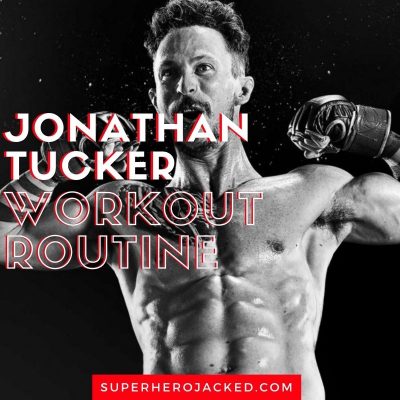 After revisiting Frank Grillo’s Boxing Workout this week it only felt fitting that we finally give a Jonathan Tucker’s Workout a slot at SHJ as well.

Frank Grillo and Tucker co-starred in Kingdom and now we’re getting a chance to discuss both their training styles for their roles.

Tucker has also starred in a number of other roles like Westworld, Charlies Angels, City on a Hill, Snowfall, and my personal favorite: Hostage back in 2005 with Bruce Willis!

But, that was way back before he sported such a lean and toned physique, having tacked on a ton of mass while keeping it “clean” (AKA shredded).

So now we’re here to find out just how he was able to do it.

Tucker is actually a bit shorter than the average height we’re used to for male celebs at SHJ.

Although he does fall into a range that is shared with some other shredded SHJ favorites. 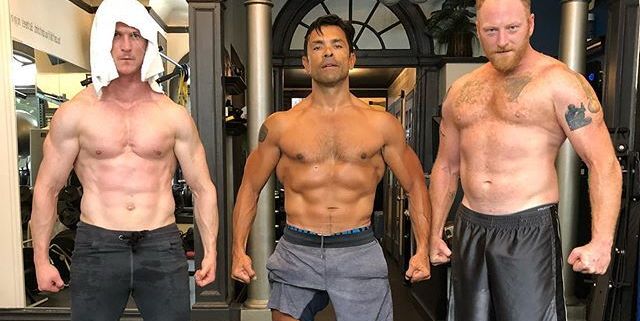 In an interview with Men’s Fitness Tucker talks about how he needed to go through a series of transformations for Kingdom.

To start he actually worked on tacking on a ton of mass before finally going through a transformation of losing 30 lbs.

When Men’s Fitness asks him what that was like he says:

“You know, it’s a mental game.  Sure you can go to the gym 5 days a week, or 7 days a week, and spend an hour there and not really see and difference or changes.  Or, on the other hand you can be in touch with who you are, what your goals are, what your limits are, and how far you’re willing to push your body when your mind is saying no.”

He goes on to say:

“But the fact is that the people don’t want to put in the effort, or people are incapable of overcoming the mental hurdles or requirements that are needed to see results.”

I think at first he was referring to the fact that it’s a battle of juggling both your intense training and nutrition, but then as the interview went on he actually seemed like he was suggesting that he simply worked harder than anyone else in the gym as well.

Now, I can tell you know what his training was like that he DID train at an extremely high volume and intensity level, but the fact of the matter is: you don’t actually HAVE to in order to achieve The Superhero Physique.

Props to Jonathan Tucker, of course, and we still want to take a look at how he did it, but we here at SHJ also know that it doesn’t have to be “a grind”, and suck the life out of us.

Actually, more often than not we see celebrities opting for the sustainable approach and adding in indulgences and cheat meals.

Thankfully, we have more from Muscle and Fitness in this area.  Here’s what they tell us about Tucker’s diet:

Then there’s his diet. Tucker’s daily noshes consist of about six to eight small, clean meals. He’ll eat cottage cheese with a little bit of low-sugar jelly or consume nuts and frozen blueberries. He’ll drink goat’s milk and matcha green tea powder. To curb the urge to cheat, he often attempts to fool his mind into thinking he’s eating something tastier than what’s on his plate. Instead of tortilla chips, he’ll have Mary’s Gone Crackers. Instead of regular pasta, he’ll eat brown-rice pasta, quinoa pasta, or spaghetti squash with marinara sauce. “You’ve got to find the stuff that tricks your body and mind into thinking it’s good enough,” says Tucker. “It’s not going to be the same, but [it can be] good enough.”

One thing I can get behind is the last thing he said, although I would phrase it a way that changed it to “You have to find what works for you.”; which essentially equates to how I feel about customizing your nutrition system around YOU and YOUR WAY of doing things for sustainability.

Jonathan Tucker didn’t only get shredded, he also got STRONG.

Actually, he was doing much more than that….here’s a full rundown:

In addition to his MMA crash course, Tucker was jumping rope and going on five-mile runs for cardio. He was also doing semi-hot yoga, an activity he credits with dramatically improving his leg strength. He regularly worked out at Easton Gym, the oldest gym in Hollywood. Although he’s not a big guy—5’10” and 170 pounds on a good day—Tucker can still deadlift 405 pounds, leg press 1,000 pounds, and bench press with 100-pound dumbbells. During these workouts, Tucker often performs extremely slow reps to maximize the time under tension and encourage muscle growth. “He has real goofball strength,” notes Farhoudi.

But, don’t worry, he tells us all about the training that got him to this point.

Part of the description starts with him telling us about his goals:

“I wanted big arms because people really notice them, and it says a lot about somebody who’s capable of defeating another human being in a cage. I wanted [abs] to show that this guy knew how to diet. I wanted you to see enough leg definition where it looked like he jumped rope and kickboxed.”

Which he continues by sharing what he was specifically trying to NOT accomplish with his training:

The thing about Tucker and his extreme volume that we discussed in his diet and nutrition section is the fact that he was extremely motivated.

Here’s something from his trainer:

“He’d be at the gym and say, ‘Dude, I’m so tired,’ ” recalls Farhoudi. “Then I’d watch him crush a workout. Then the next morning he’d be up at 6:30 for a run. He exhibits more discipline than just about anyone I know. When he gets into that Red Zone, he feels compelled to go even harder. Some people run away from the fire. Tuck runs into it.”

So if you want to take it to this level of training you’re going to need to be ready to really put in a TON of effort.

We have his chest workout routine straight from what he shared with Muscle and Fitness, and then we’re going to use that as a model to get the rest of our training in place, but we also need to realize he was doing morning cardio ON TOP of this weight training AND adding in MMA style bootcamps as well to really mold into his character.

For that I’ll be adding in MMA training resources as well as different styles of morning cardio and running we do use.

For this one we’re going to be doing a five day split based on Tucker’s exact chest workout that he shared with Muscle and Fitness.  It’s important to note that he did sometimes add in extra weight training and accessory work, so if you have some extra gas in the tank, don’t be scared to do the same.  On top of that we’ll be adding in morning cardio that I will share training for at the end, as well as some optional mixed martial arts resources.

Tuesday: Morning Cardio and Afternoon Back

Jonathan Tucker also did morning cardio to burn extra calories and help shred 30 lbs of fat to get ready for his role.

For this we have quite a few options. Of course you can opt for a run in the morning like we heard Tucker utilize himself, but we can also opt for some HIIT options, or even switch it up completely.

If you’re going to be running in the morning, I suggest scaling it based on your fitness level like we usually do here at SHJ:

And, if you need some help getting started, here are a handful of celeb and character workouts:

Alternatively, you can also use HIIT training in the morning, or completely vary your cardio by doing a handful of different options.

As promised, I also have some mixed martial arts style training resources for you to step it up a notch.