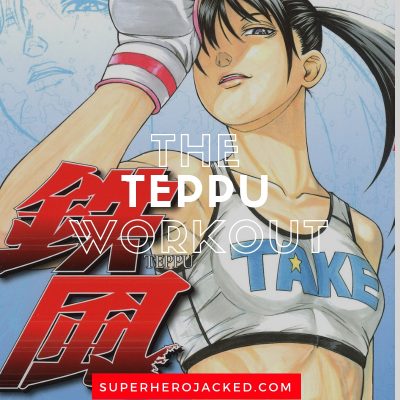 Baki was based on his manga and then Netflix picked it up, and Teppu never made it to a TV show (maybe there’s still hope?), but I thought she still deserved a spot on the site.

We’ve also been on an anime role lately, having seen tons of DBZ characters (which I won’t name all of, but you can see all of them listed on Toppo’s workout), plus One Punch Man and All Might as well.

Natsuo comes right in around the same height as Baki actually.

I wonder if she’d be okay with that..

This is where I get to break down the “how” and “why” of the workout we’re going to build based on the characters, in this case Natsuo Ishidō’s, powers and/or abilities.

Here’s some information on her from the Teppu Wiki page:

The plot revolves around Natsuo Ishido, a freshman in high school. She has a natural talent for everything she does, and as a result becomes bored with doing anything. She is often praised (and occasionally hated) for her incredible talent, but in reality she feels lonely, so she is often looking for more and more things to occupy her time. As she fails to find anything that is sufficiently challenging, her loneliness and boredom reach a bottomed-out state.

They continue by telling us a bit more:

She cannot understand why other people cannot do things which she can do and that is because she is naturally talented at everything she does. This has given her a condescending attitude against her opponents, who she goads and teases during their match and after Natsuo’s inevitable victory. She is also ruthless when fighting, whether or not the fight is a serious one. Natsuo has come to the realization that people with the ability to be the best without even trying have the hardest time, since they don’t have anyone to bond with and their whole life is one big competition. She is lonely and yearns for someone who can defeat her and give her something to actually work for. This is all hidden, however.

Kind of reminds me of some of the main protagonists within the Baki series, actually.

While I can’t teach you to simply be a natural, we CAN train our asses off to try to be as good as Natsuo Ishidō.

Similar to Baki, we’re going to be training at a high volume!  The only difference here is that you’ll be subbing weight training.  You can also decide to alternate training schedules for MMA and bodyweight, but I’ll be programming this one for two-a-days.