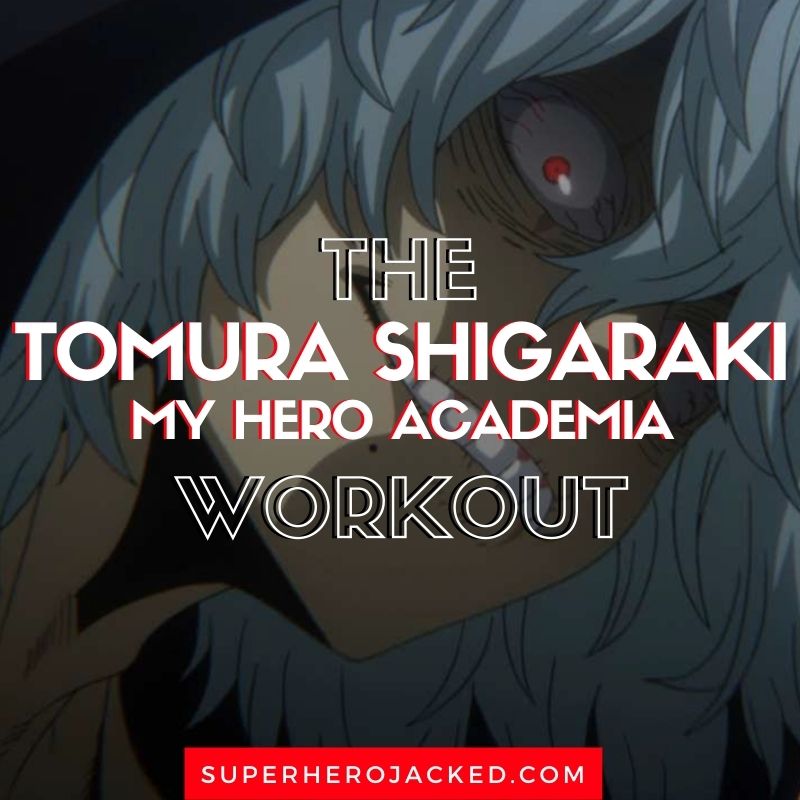 Tomura Shigaraki is one of My Hero Academia’s favorite characters among fans.

It didn’t start out that way – and actually out of six different polls it took five before he came in the top ten – but now he’s one of the top!

This is a new addition to our Anime Workouts Database that we have now that we have so many MHA workouts here at SHJ; and this just makes it easier for you guys to find them all.

Another reason Shigaraki is needed here at SHJ as soon as possible is the fact that he’s also one of the most powerful My Hero Academia characters, and we’re going to see him added to that awesome listicle that is coming soon as well.

Tomura Shigaraki’s 5’9 fits well to his character’s positioning in the show.

He doesn’t stand tall and behemoth-like which we see among All Might and All For One, but rather skinny and lanky. 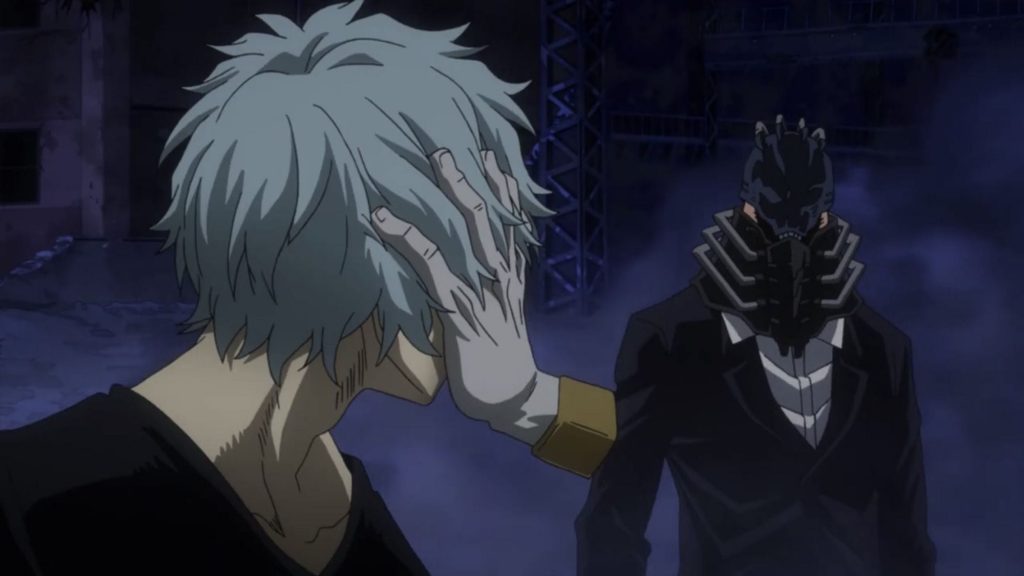 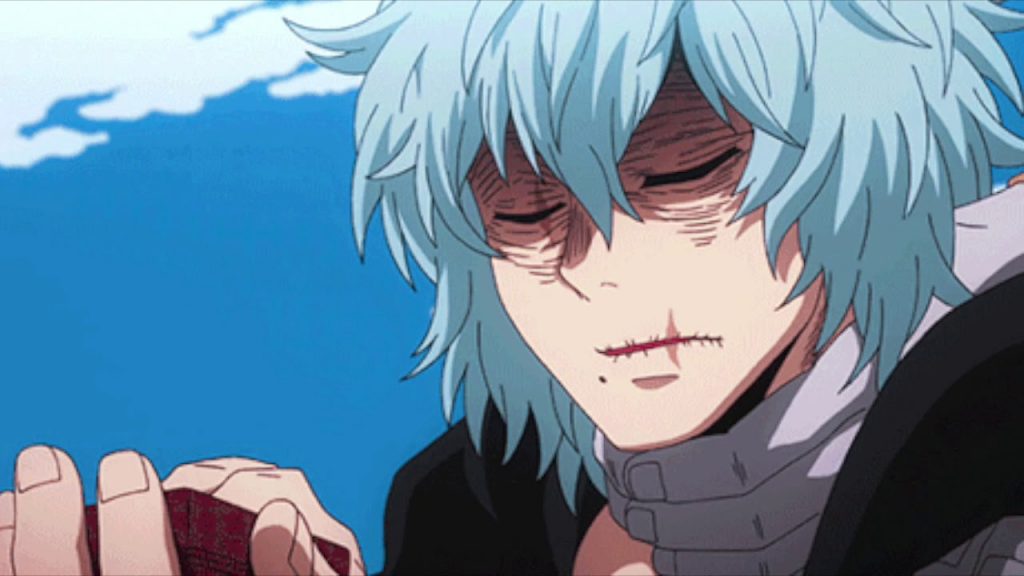 To start us off we’re going to be pulling right from Tomura Shigaraki’s Wiki Fandom page to have a brief bio to build from.

Shigaraki’s Wiki Fandom is actually much longer than what we’re used to see among MHA characters, so it’s a good place to start.

Tomura Shigaraki, real name Tenko Shimura, is the leader of the League of Villains after his master, All For One’s, defeat and arrest, and the primary antagonist of the series. He made his first major appearance as one of the main antagonists of the U.S.J. Arc. Like the rest of the League, his goal is to kill All Might, the “Symbol of Peace,” thus destroying the society he represents and to create a new one with a new form of justice in his own image.

Later on, Tomura changed his goal to instead, destroy society all together rather than reshape it. He soon merged his organization and the Meta Liberation Army to form the Paranormal Liberation Front, becoming its Grand Commander and later inheriting the All For One Quirk.

As some of you can likely tell from that brief bio (or from having seen the show), we can’t let Tomura Shigaraki’s appearance fool us: he is incredibly strong.

Moving into his powers and abilities, which will help us actually build a workout routine for him, Shigaraki’s list is extremely long.

I’ll actually be cutting it down a bit and utilizing bullet points for this one, but here’s how his Wiki Fandom starts off with his overall abilities:

Overall Abilities: Tomura is known to be one of the most dangerous villains in Japan, contending with Pro Heroes in combat thanks to his physical and analytical skills. As the leader of the League of Villains, Tomura has total command over his powerful subordinates. During the U.S.J. Incident, Tomura had the mettle to briefly take on the formidable Pro Hero Eraser Head, and successfully use his Decay Quirk on the Erasure Hero’s right arm. Tomura was even confident that he could take down Izuku Midoriya, Shoto Todoroki, Katsuki Bakugo, and Eijiro Kirishima, four highly capable U.A. students, although at the time, didn’t know the full extent of the quartet’s abilities. Tomura was capable of battling Gigantomachia for half a month, not giving up until he is able to make the behemoth submit. When he faced Re-Destro, and his left hand was partially destroyed, Tomura’s prowess had been suddenly enhanced to levels beyond his natural parameters. According to Re-Destro, if Tomura had his newly increased physical parameters during the Kamino Incident, he would’ve easily taken out at least one or two of the Pro Heroes during that event, even without his Decay Quirk. After a fierce battle, he was not only able to defeat Re-Destro to gain control of the latter’s army, but also tame Gigantomachia with his accomplishment. Similar to his master, Tomura’s aura is able to instill fear into others, and his mere gaze was enough to paralyze Trumpet’s followers, who were under the influence of Incite and given orders to eliminate Tomura. This was seen again when he encountered Izuku and Katsuki, with his mere presence being powerful enough to instill hallucinations of death into both teenagers.

With this they also name enhanced strength, enhanced durability and enhanced speed; along with his keen intellect and indomitable will.

They also move into this:

Bodily Modification: After becoming leader of the Paranormal Liberation Front and earning the respect of Gigantomachia, Kyudai Garaki subjected a willing Tomura to body modification surgery. While the details of this surgery and its effects are unknown, the doctor believes that it will allow Tomura to surpass the strength of One For All. Even before the surgery was finished, a hero as powerful as Mirko was overcome with fear when she sensed him in his surgery capsule to the point that she attempted to smash it, and quickly told the other heroes that Tomura could not be allowed to awaken from the surgery no matter what. Indeed, Tomura’s physical abilities have increased so exponentially that, upon his awakening, Endeavor goes as far as to compare him to All Might. The modifications allow him to drastically amplify the power of his already awakened Decay Quirk, giving him the ability to disintegrate masses as large as the entire Jaku Hospital, a portion of the surrounding city and the nearby forest and mountains in one fell swoop. However, because his modification was interrupted before completion, his new body has some drawbacks and will begin to tear if he overexerts himself, as seen when a large tear appeared on Tomura’s chest, and even the super regeneration took a moment to kick in.

Which also gives him immense strength, speed, durability and stamina!

Along with this Shigaraki also has his Quirks, which are Decay and eventually All For One.

While Shigaraki’s overall appearance may warrant us to write this routine mainly around fat loss and shredding; his powers actually warrant heavy lifting and strength focus with endurance and speed work like a lot of other superhero characters (and villains) we’ve come across.

So get ready for volume.

We’re going to be training a total of 4 days per week focusing on strength, speed, endurance and fat loss.  Since Shigaraki is strong, but his physique is actually much slimmer – we’re going to be building a much less intense training style than we are used to seeing from characters like All Might, Endeavor and All For One.

Wednesday: All For One Optional Endurance Work

Thursday: Decaying Back and Biceps